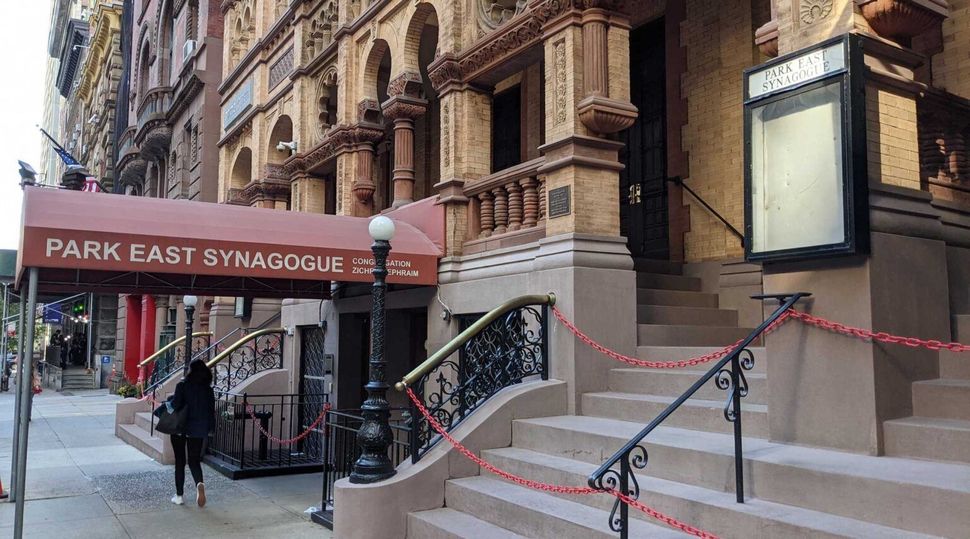 Park East, an Orthodox synagogue on Manhattan’s Upper East Side, has been roiled by controversy over the termination of its assistant rabbi. (Ben Sales)

Five months after a conflict over synagogue leadership went public, Park East Synagogue and its former assistant rabbi Benjamin Goldschmidt have both moved on. While the synagogue has hired a new rabbi to temporarily replace Goldschmidt, the rabbi himself has cofounded a new synagogue.

The venerable Modern Orthodox synagogue on Manhattan’s Upper East Side has hired Rabbi David Flatto as assistant rabbi to replace Goldschmidt. Flatto, who has a law degree from Columbia University Law School and a doctorate from Harvard University’s Department of Near Eastern Languages and Civilizations, is joining the synagogue until the fall, when he will resume teaching law at the Hebrew University of Jerusalem. Flatto received his ordination from Yeshiva University.

Goldschmidt, meanwhile, has been hosting services for months at a new synagogue on the Upper East Side. On Wednesday, he and his wife announced the name of the synagogue on social media. They call it the Altneu — meaning old-new in German — because it’s meant to balance tradition and modernity. The name is also a reference to the Hebrew phrase al-tenai, meaning, “on condition.”

“Al-tenai that even in Manhattan, it will be an oasis from the rat race, not an extension of it,” Goldschmidt’s wife, Avital Chizhik-Goldschmidt, a former Forward editor, wrote on Instagram. “Let this be a shul where one is not judged by the wallet but by character.”

Altneu is also the name of a synagogue in Prague founded in 1270, Goldschmidt explained in a Medium post.

Goldschmidt, who grew up in Moscow, had worked for Park East for a decade. He was popular with young congregants and known for his outreach to Russian-speaking Jewish families. His abrupt firing in October sparked protest among Park East’s congregants. Goldschmidt’s opponents accused him of attempting a “coup” against Park East’s senior rabbi, Arthur Schneier, a nonagenarian Holocaust survivor. Godschmidt denied this allegation at the time.