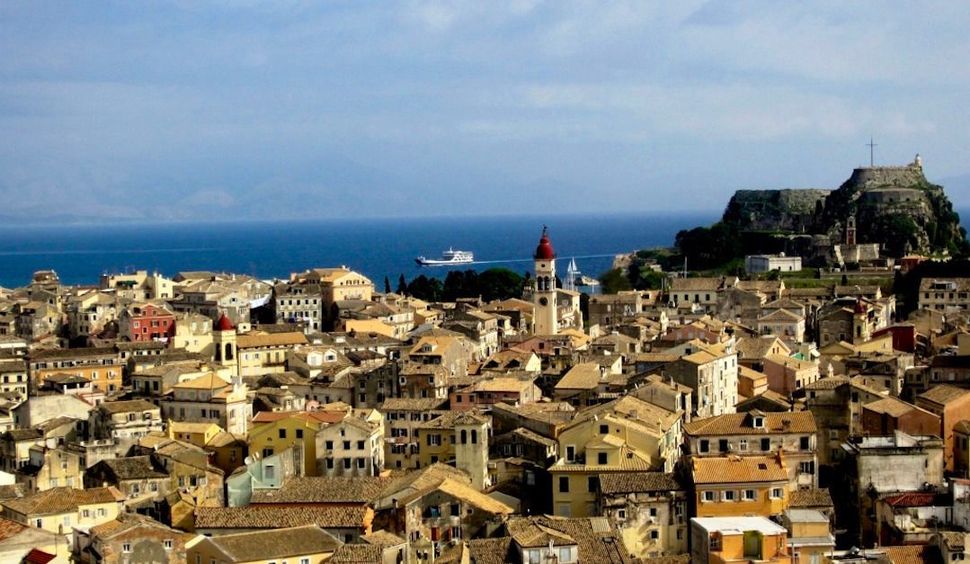 A view of Corfu. By Yannick Pasquet

CORFU, Greece — The door of the Scuola Greca synagogue on the island of Corfu is painted emerald green with two Stars of David in the middle. When you push it open, the hallway leads to a low-ceilinged space where painful memories rest between the bricks: portraits of the island’s Jewish Holocaust survivors adorn the walls. 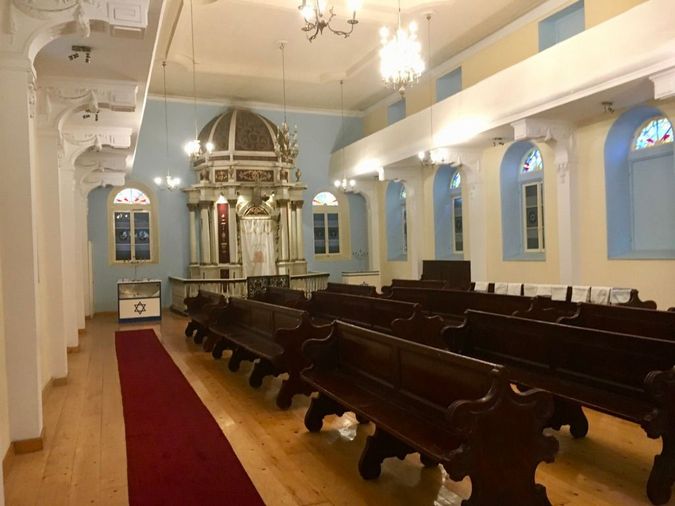 The interior of the Scuola Greca synagogue on Corfu. By Yannick Pasquet

One photograph is of Rebecca Aaron, sitting on a large armchair with a patched armrest, in a blue gown whose sleeve does not quite cover the faded ink on her arm from her time in Auschwitz. Aaron was the last of some 50 Holocaust survivors who returned to Corfu after the war; the island’s daily newspaper, “Enimerosi” — Greek for “Information” — said her 2018 death concluded “the most tragic chapter of Corfu’s modern history.”

“Two thousand Jews lived here before the Holocaust — today there are only 60 of us left,” Zinos Vellelis, a former clothing-shop owner and former president of the tiny community, told me at the beginning of our long interview. “I got married here in 1993,” he said, referring to the Scuola Greca synagogue. “Since then, only three weddings were held.”

I am a French journalist who has worked for the past 20 years in Germany and Greece. I’ve spent many summers on Corfu, a jewel on the Ionian Sea with green olive trees, cobblestone streets and about 100,000 residents that is the setting for the British TV series, “The Durrells in Corfu.” After walking past the synagogue many times, I wandered inside one day in 2015, shortly after the terror attack that killed four people in a kosher supermarket in Paris.

Inside, I found an old man, who shared his fear of starting over. He told me how nearly all of the island’s Jews were exterminated during the Holocaust. When you live in Berlin like I do, you are obsessed with the history of the Holocaust, so I set out to understand the history of this small community.

It turns out that Jews have lived here among the Greek Orthodox Christians for more than 800 years. During the Venetian period, between 1386 and 1797, Romaniote Jews — those who spoke Greek — lived in a ghetto alongside Jews who had been expelled from Spain or Italy. To this day, inhabitants of Corfu refer to the neighborhood as “Evraïki” or “Ovraïki,” which mean Jewish in, respectively, mainstream Greek and the dialect spoken on the island.

Scoula Greca, which was built in the 17th century, is made of yellow stucco and Venetian in style, with the sanctuary on the second floor. It is the only one of the ghetto’s four synagogues that has survived time. Next to it are the overgrown ruins of the Talmud Torah, which was damaged by bombs during World War II.

There are no rabbis on the island anymore. One from Athens comes for the high holidays and Passover, or to officiate at any major event. “We cannot provide a synagogue service on Saturday,” Vellelis said.

Vellelis, 68, paged through a book detailing the history of the Jews of Thessaloniki, a port city on the other side of the country that was sometimes called the Jerusalem of the Balkans. There were 56,000 Jews there before World War II; 1,950 after. Here in Corfu, the book says, 2,000 were deported to concentration camps, 187 survived.

The United States’ Holocaust Memorial Museum in Washington estimates that Greece lost at least 81% of its 60,000-70,000 Jews during the Holocaust, most of them exterminated at Auschwitz-Birkenau.

The Germans occupied Corfu in September 1943. On June 9, 1944 — only four months before the Nazi withdrawal from Greece — all island’s Jewish inhabitants were systematically ordered to meet in the “Kato Platia,” the main square of the old town, before being taken to the old Venetian fortress nearby.

The German historian Diana Siebert, in a book on Corfu’s history, says that about 1,800 Jewish men, women and children were transported on three boats to Athens between June 11 and 15. From Athens, they were taken by train to Auschwitz.

Some unknown number of Corfu’s Jews escaped this fate by being hidden by non-Jewish villagers on the island.

The French director Claude Lanzmann devoted a part of his 1985 documentary “Shoah” to the tragedy of the Jews of Corfu. Among those interviewed were Rebecca Aaron’s husband, Armando, who was also a longtime leader of the community before his death in 1988.

“We arrived in Auschwitz on 29 June,” Armando Aaron testified in the film. “Most of us were gassed during the night.” According to the archives at Auschwitz, 446 men and 175 women, slightly more than a third of the total, instead were sent to the camps for forced labor.

“My father was married to my mother’s sister, but she died in Auschwitz,” Vellelis noted. “He remarried my mother after that.”

The main person responsible for the deportation of Corfu’s Jews was Anton Burger, who managed to escape justice after the war. He was sentenced to death in 1947 in the People’s Court in what is now the Czech Republic, but escaped from detention before the scheduled execution. He was arrested again — and escaped again — and survived under false identities until his death in 1991.

“Many of the Jews in Corfu today are children of survivors,” said Lino Sousi, 73, a retired civil engineer and another former chairman of the Jewish community. “My mother was sent to Auschwitz with 35 members of her family.” Only she and her three sisters survived.

Sousi said his mother never spoke about her Holocaust experience. “My aunt told us about her ordeal, but we didn’t ask many questions,” he said. “Children and all those innocent people were murdered. Why? I still look for answers until this day without any luck.”

For the thousands of tourists who visit each summer, the history of Corfu’s Jews remains largely unknown.

To keep the memory alive of those who survived the Nazi occupation, Vellelis has for decades kept the striped prisoner’s shirt his father wore in Auschwitz hung on the wall of his clothing shop in the former ghetto, just a few yards from Corfu’s synagogue.

“The striped shirt became a conversation starter with tourists from all over the world,” said Vellelis, who retired in 2019 after 50 years running the shop. “It was one of those things that allowed me to share a common history with Jewish tourists from Brazil, Australia and everywhere else.”

Not far from the store and the synagogue, there is a small memorial in a sunny square in the old town, where Corfu’s Jews were deported to their deaths. The bronze statue was placed in 2001 and shows a frightened couple with their son and a baby in his mother’s arms, all nude.

“Never again for any nation,” it reads. 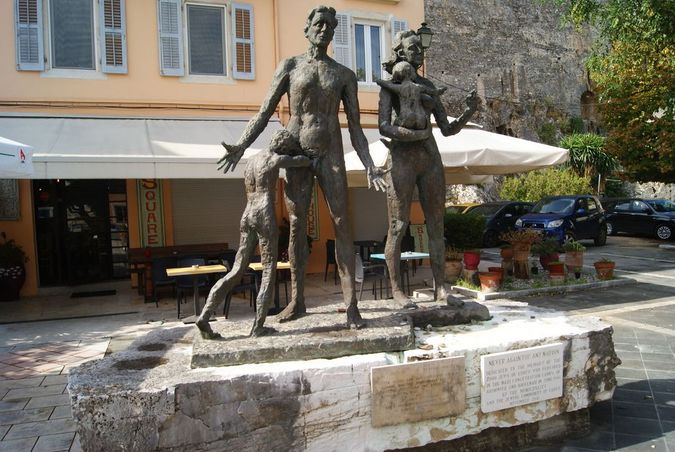 A memorial to the Corfu Jews who were killed in the Holocaust. By Yannick Pasquet

There are a few other subtle reminders of the island’s Jewish history for those who care to look as they walk through the alleys decorated with large flower pots on windowsills and colorful clothing hanging outside to dry. Albert Cohen Street honors the Swiss writer who was born on the island in 1895. There is also the “street of the Jewish victims of Nazism,” a narrow lane off the town’s main pedestrian walkway that connects to the old ghetto.

The island’s 60 current Jewish residents remain close to one another and try to keep the Jewish spirit alive in the heart of this intimate island, even as the younger generation leaves Corfu to study abroad.

And it’s not only the island’s relative handful of Jews who are holding onto the community’s history.

Inside another tiny clothing shop, a few steps from the synagogue, Giorgos Agiotatos keeps boxes of old photographs behind the cash register of his shop.

These photos portray moments of childhood, adolescence, celebrations, house parties, and memories of a time when the Jewish community was much larger. One of the faded images shows Vellelis’s parents in the 1960s, at a summer party.

“I grew up with Holocaust survivors and their children,” Agiotatos told me when I visited. “They are my friends and family and their agony is mine as well.”

He keeps two Israeli flags in the shop as well, one by the box of the photos, the other behind it on a shelf. They are daily reminders that Corfu is a part of Jewish history.

Yannick Pasquet is a journalist for the Agence France-Presse (AFP) who lives mainly in Berlin and has spent many summers on the island of Corfu.