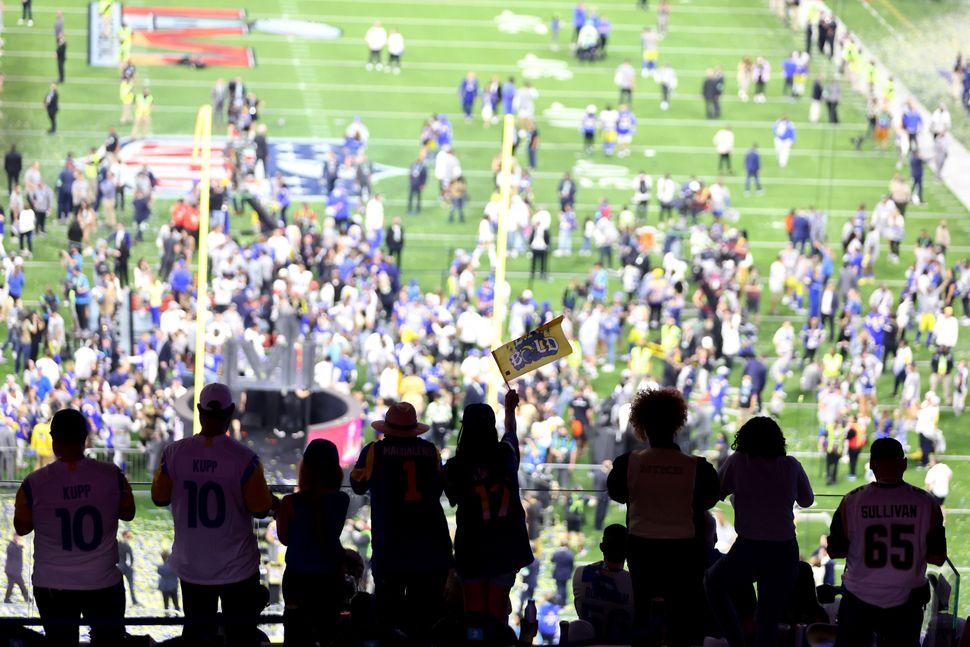 When Rabbi David Wolpe, the leader of Sinai Temple, accepted a free ticket to the Super Bowl he never imagined it would cause weeks of turmoil at his Los Angeles congregation. But Wolpe was forced to apologize after he posed maskless for a photo at the event — in contravention of Los Angeles County regulations and, crucially, counter to the divisive COVID-19 protocols at his synagogue.

An anonymous group of former Sinai members circulated an email to Wolpe after he posted the photo on social media, sarcastically directing him to quarantine and accusing him of hypocrisy.

“David: its [sic] apparent you identify as a supreme leader more than you identify as a rabbi,” the email read in part. “When you report to your puppeteer-financiers at the end of your shift, you can explain to them that anything you do at this point is simply ‘too little, too late.’”

The anger at Wolpe’s maskless photo reflects a debate that extends beyond Sinai Temple. Other major synagogues and rabbis find themselves under attack for trying to navigate pandemic health and safety guidelines that can be shifting and uncertain. At the same time, many congregants have charged the shuls with a lack of accountability and transparency in pushing measures that affect themselves and their children.

Ready for the #superbowl – excited for the game, and grateful for the seats! #larams pic.twitter.com/el7TpDzdXl

But in addition to apologizing, Wolpe used his sermon to decry the vitriol directed at him and others over mask and vaccine requirements at Sinai and its attached day school.

“Whatever I did to shock and hurt people, we have to find a way to deal with our pain that is embracing, that fosters decency and not distance, understanding and not outrage,” Wolpe said.

Other institutions in the area have faced turmoil similar to that at Sinai. Houman Hemmati, chief medical officer for a biotechnology startup, said his children were forced out of University Synagogue’s preschool after he and his wife were critical of the school’s safety protocols. He said other families have had similar experiences and that Wolpe’s actions proved to be a tipping point for community members who had long been frustrated with how local institutions had handled the pandemic.

University Synagogue preschool did not immediately respond to a request for comment.

Hemmati said the debate at Sinai and other congregations appeared to be breaking down along partisan political lines, with more conservative members, including many Persian Jews, chafing against masking and vaccine requirements.

“There are very clear political lines among the congregants,” said Hemmati, who now sends his two children to a Chabad day school, “and those political tendencies have tended to translate, unfortunately, into differences in COVID policies.”

The anger has primarily been directed at a series of decisions made by both Sinai Temple and Stephen Wise Temple and their affiliated day schools.

Some parents were frustrated by the decision to keep those schools closed in 2020, once what they believed to be sufficient evidence emerged that COVID-19 did not pose a serious threat to children. More recently, parents at both schools have called on the administrations to announce that they will not require children to be vaccinated against COVID-19 unless there is a government mandate that forces them to do so.

California announced last fall that all school children in the state must be vaccinated following full FDA approval of the COVID-19 vaccine for their age group, which experts believe will happen in early 2023. But some parents are hoping that the mandate will be withdrawn or blocked by the courts – and, in such a case, want to ensure that the day schools will not impose their own requirements.

Glenn Sonnenberg, a former president at Wise Temple, said that a group of parents at the synagogue’s affiliated Wise School, had attempted to enroll their children for the coming school year on the condition that the school not mandate vaccines unless forced to by the state.

“While some have indicated concerns with safety, but without much data, some have cited political justification for their reticence,” Sonnenberg said.

The divisions at Sinai, which is affiliated with the Conservative movement and had about 1,700 families before the coronavirus pandemic began, appear to be especially deep. Michael Arnall, the president of Sinai, spoke from the pulpit after Wolpe on Saturday with a plea for civility.

“I promise you that our temple leadership hears you,” Arnall said. “However, one thing cannot change, cannot falter. We cannot allow COVID to change how we treat each other – or who we are as a community.”

Jewish day schools across the country have different approaches to vaccinations, with some requiring them and other simply encouraging parents to vaccinate their children.

Beit Rabban Day School in Manhattan held a vaccination drive for students, followed by a party with cupcakes and an art station. “It was celebratory and beautiful,” Stephanie Ives, Beit Rabban’s head of school, told JTA. “The children felt so comforted to be vaccinated at school, where they feel at home, especially seeing their teachers there to cheer them on.”

As of last summer, American Jews had the highest rate of vaccination of any religious group in the country but there have still been pockets of discontent. One parent at Shefa School, a New York City school for Jewish children with disabilities, told JTA that that institution’s vaccinate requirement felt especially fraught because many students could not easily transfer to another school if they did not want to receive the shot.

“As a Jewish community, is this how we wish to be seen?” Wolpe asked.

Rabbi Yoshi Zweiback, who leads Wise Temple, said the Wise School has started hosting regular social events for parents that has helped soften the stress and alienation caused by the pandemic.

Zweiback said he tries to keep in mind that despite fierce disagreement over COVID-19 protocols, the school community has far more in common with one another and that the parents expressing concern are coming from a reasonable place.

“They are coming from a place of concern, of love, of fear – very understandable human emotions,” Zweiback said. “When I think about it that way, it’s much easier for me to continue to be in conversation with that person, to have an open heart with that person.”

Wolpe and Sinai’s leadership declined to be interviewed. A spokesperson said a handful of families may have left the synagogue and school over anger at health rules, but the number was hard to measure because of enrollment cycles. But in his sermon Saturday, Wolpe, who has a large online following, lamented that the discord over the pandemic had reached such a pitch.

“Is it possible to find a way to express our disappointment, and even our anger, without enraging and dividing ourselves one from the other?” Wolpe asked. “As a Jewish community, is this how we wish to be seen?”