When Barry Jacobson purchased a vacation home for his family in the Berkshires, there was little reason to think he knew how much grief it would cause him. After pouring money into repairs on the property, the well ran dry and left it without water. Then someone broke in and stole more than $20,000 in items. But it was a small fire that scorched several bedrooms in the winter of 1982 that would haunt him for nearly four decades. Prosecutors in Berkshire County, a rural corner of western Massachusetts, charged Jacobson with arson.

“All those rich, New York Jews come up here and think they can do anything and get away with it,’” one juror told another during deliberations.

The local headlines also disparaged him, with the Berkshire Eagle offering breathless coverage of the “N.Y. millionaire” who testified “that he is worth nearly $8 million,” and referred to his real estate company as a “multi-million dollar cartel.”

“The discussion amongst the jurors about his religion was tied into the facts of the case,” said Robert Trestan, the ADL’s New England director

Jacobson was ultimately convicted after police produced a vial of gasoline shortly before the trial that they claimed had been collected during the investigation nearly a year earlier. While he was incarcerated for less than six weeks, the criminal record trailed Jacobson, and scared away potential business lenders.

Now, 39 years after the initial conviction, a judge has vacated Jacobson’s conviction and the local prosecutor has dropped all charges related to the fire. The Anti-Defamation League and Innocence Project plan to announce the news at a Tuesday press conference with Berkshire County District Attorney Andrea Harrington.

The Innocence Project, which was founded at Yeshiva University, is perhaps best known for using DNA evidence to overturn wrongful convictions. Barry Scheck, a co-founder, said this was the first time the group had overturned a conviction because of antisemitism, and that its investigation raised important issues concerning juror bias and arson, which often involves faulty scientific evidence. 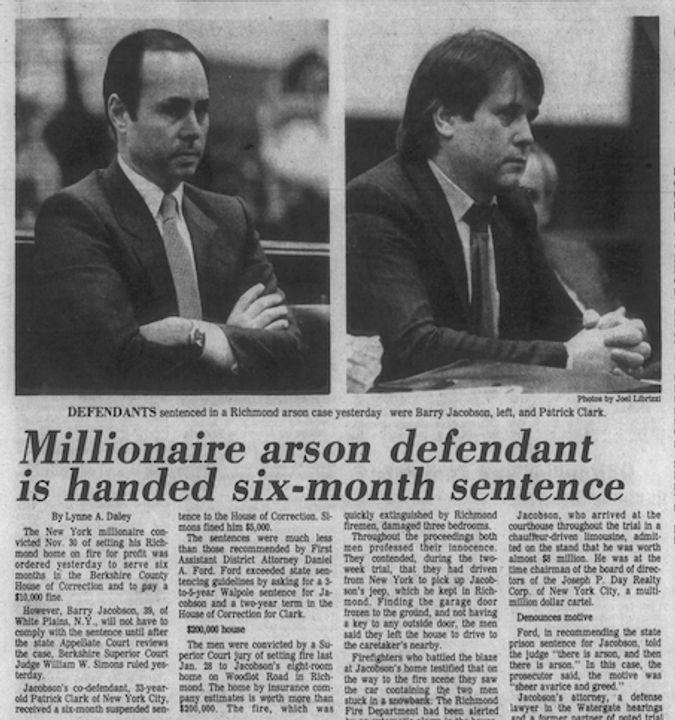 Media coverage of the case focused on Jacobson’s wealth and status as an out-of-towner.

“It didn’t take very long for me to look at this case and realize this was a real miscarriage of justice,” said Scheck.

While the antisemitic comments made by at least two of the jurors were brought to the attention of Jacobson’s attorneys shortly after his conviction, they were dismissed as irrelevant when he appealed the case. But Robert Trestan, the ADL’s New England director, said it was impossible to separate those prejudices from the decision to convict Jacobson.

“The discussion amongst the jurors about his religion was tied into the facts of the case,” said Trestan. “They connected that discussion, and the stereotypes associated with Jews, to the allegations and the charges against him.”

’I can’t admit I did something I didn’t do’ 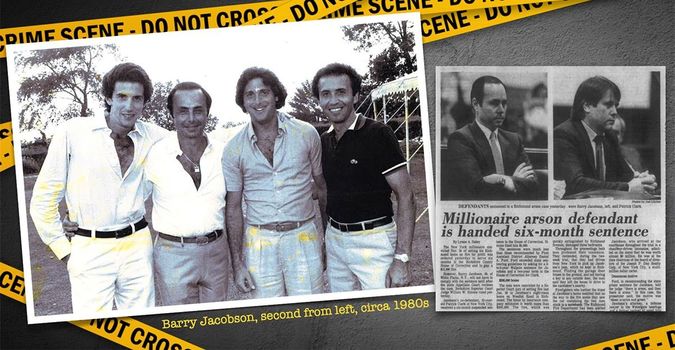 The case was premised on the notion that Jacobson attempted to burn down the house to collect insurance money, despite already being tremendously wealthy. The prosecutor, Daniel A. Ford, told jurors that Jacobson was motivated by unadulterated greed.

“I don’t ask you to believe he burned down his house to pay the mortgage, or to put food on the table,” Ford said. “Just because he has seven million doesn’t mean he doesn’t want more.”

“You can’t believe how good this feels,” Ford said after Jacobson was convicted. The prosecutor pushed for him to serve five years in state prison, though the judge ultimately sentenced him to six months and he was released after 40 days. That relatively short term outraged both state lawmakers and one of the jurors on the case, Deborah Mottershead, who referred to Jacobson’s “scheming” in a letter to the Eagle. “The way I look at it, that old cliche stands tall: Money talks!” Mottershead wrote. 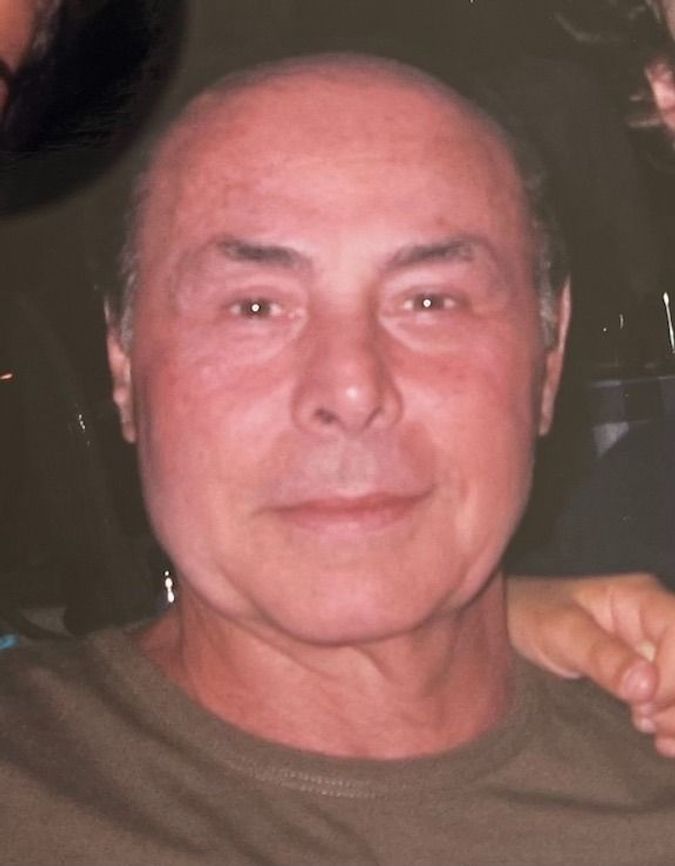 Jacobson initially sought a pardon but Robert Cordy, his attorney, said his refusal to admit guilt during four separate hearings between 1987 and 2002 stymied those efforts despite dozens of letters of support and work on behalf of a long list of charities.

“You had to admit your guilt in order to get your pardon and Barry couldn’t do it,” said Cordy, who began working on Jacobson’s case in the 1990s before serving on the Massachusetts state supreme court from 2001 until 2016. “He said, ‘I didn’t do it. I can’t admit I did something I didn’t do even though I need this pardon.’”

(Peter Clark, a contractor and Jacobson’s alleged accomplice, had his conviction overturned on appeal in 1985.)

Cordy said that Jacobson, who declined an interview request, struggled professionally as a result of the conviction with banks and other business partners balking at working with a convicted arsonist. He said that Jacobson, 78, who still runs the Joseph P. Day Realty Corporation, is still processing the news that his conviction has been overturned following a judge’s order in January.

“I know he’s working very hard to bring himself back to normal and to get this all resolved in his mind even though it’s been resolved legally,” Cordy said.

A second look at the evidence

While the ADL focused exclusively on the offensive comments from jurors, the Innocence Project filed an affidavit with the court from John J. Lentini, an arson expert, who castigated investigators for shoddy — if not suspect — work.

Police believed that the fire started in a bedroom closet and sent carpet samples to a crime lab where they could be tested for traces of accelerants that might have been used to start the fire. The lab didn’t find any evidence in the carpet samples. But nearly a year later as the case was preparing for trial, one of the police officers delivered a vial of gasoline to the lab and stated that he had squeezed it out of one of the carpet squares and accidentally left it in a locker. The officer hadn’t described collecting the vial in his reports from the time nor had it been logged into evidence.

“I just could not put my name on something that was defending the correctness of this conviction,” said Andrea Harrington, the current district attorney

“In my 47 years of practicing in the forensic sciences, I have seen many errors, but none so egregious as this with respect to the mishandling of the evidence and the failure to properly document the chain of custody,” Lentini wrote in the court filing.

Harrington, the Berkshire District Attorney, said her office agreed to support Jacobson’s motion for a new trial, and then to dismiss the charges against him, primarily because of the antisemitism among members of the jury.

“I just could not put my name on something that was defending the correctness of this conviction,” said Harrington, who previously defended death row inmates in Florida.

She said that prosecutors often defend past decisions and court cases by default but that she was committed to independently reviewing cases brought to her office’s attention. While Ford, the prosecutor, is still active in the legal community, Harrington said she intentionally did not consult him or other attorneys who worked on the case at the time.

(Ford, who would go on to serve more than 30 years as an associate justice on the Massachusetts Superior Court, has been the focus of controversy for another conviction he secured in the 1980s in the case of Bernard Baran, a gay day care employee falsely accused of sex abuse. The Forward was not able to reach Ford for comment Monday.)

Harrington grew up in Richmond, the town where Jacobson’s vacation house was located, and said she was familiar with the types of antisemitic comments made by jurors in the case.

“Here in Berkshire County there very much remains an issue with antisemitism,” Harrington said, “just as much now as in the early 80s.”