Blue and yellow macaroons? Jews find ways to add Ukraine to their Seders 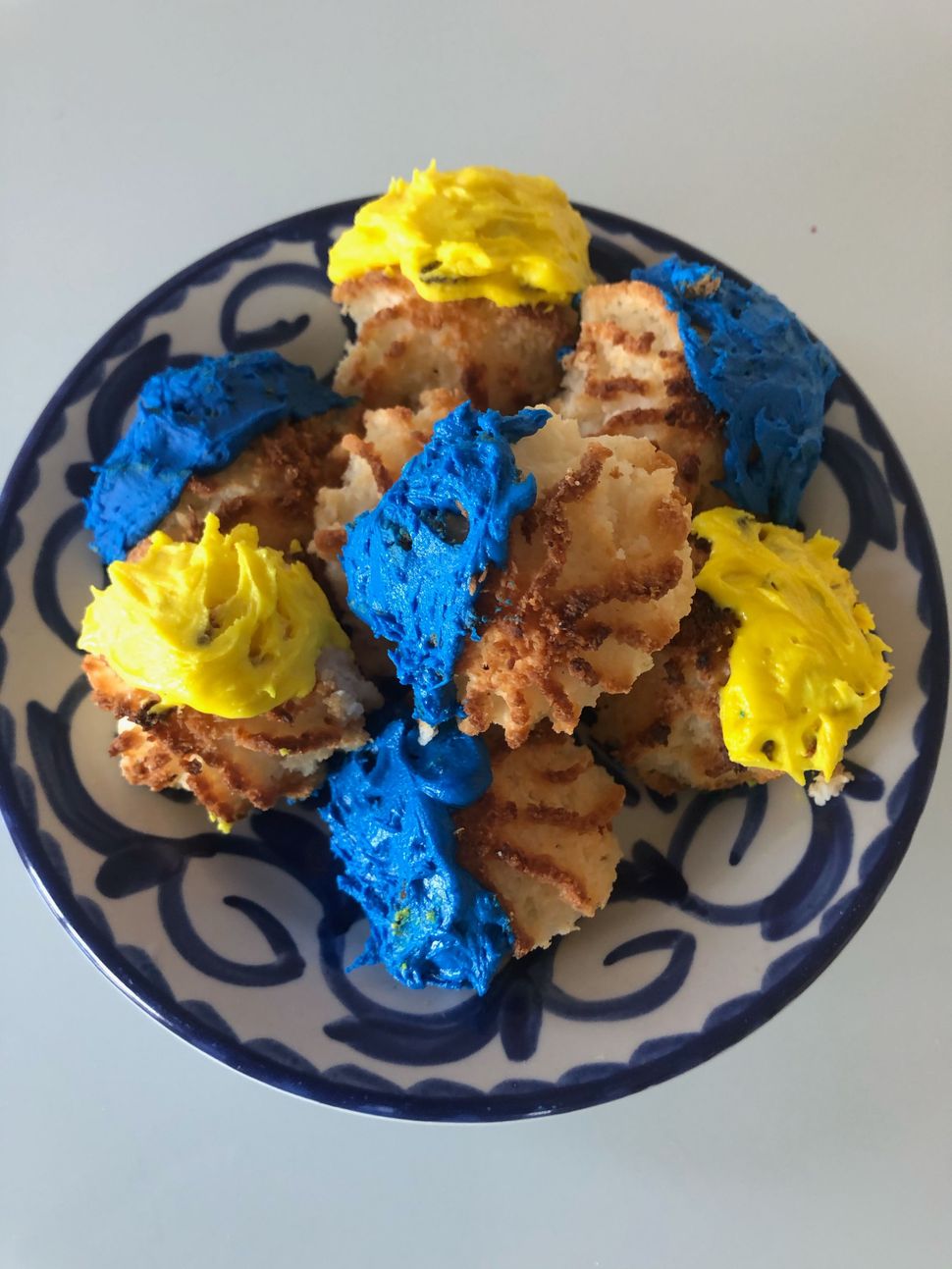 Suzi Appelbaum used blue and yellow icing, the colors of the Ukrainian flag, for her holiday sweets. By Suzi Appelbaum

Suzy Appelbaum sees her Passover Seders as teaching moments. This year, even though the Manhattan community activist is not making her own, she was determined to find ways to remember the war in Ukraine in her friends’ and family’s holiday celebration.

“Doing nothing is not an option,” said Appelbaum. She was moved by the Hamantaschen For Ukraine project in which bakers around the world donated their profits from the sale of Purim baked goods to Ukrainian humanitarian efforts.

So Appelbaum created blue and yellow coconut macaroons, the colors of the Ukrainian flag, and put them in her Purim food gift baskets. By including a baked good traditionally eaten on Passover in her mishloach manot, she hoped to jumpstart her community’s thoughts about the upcoming Passover holiday. 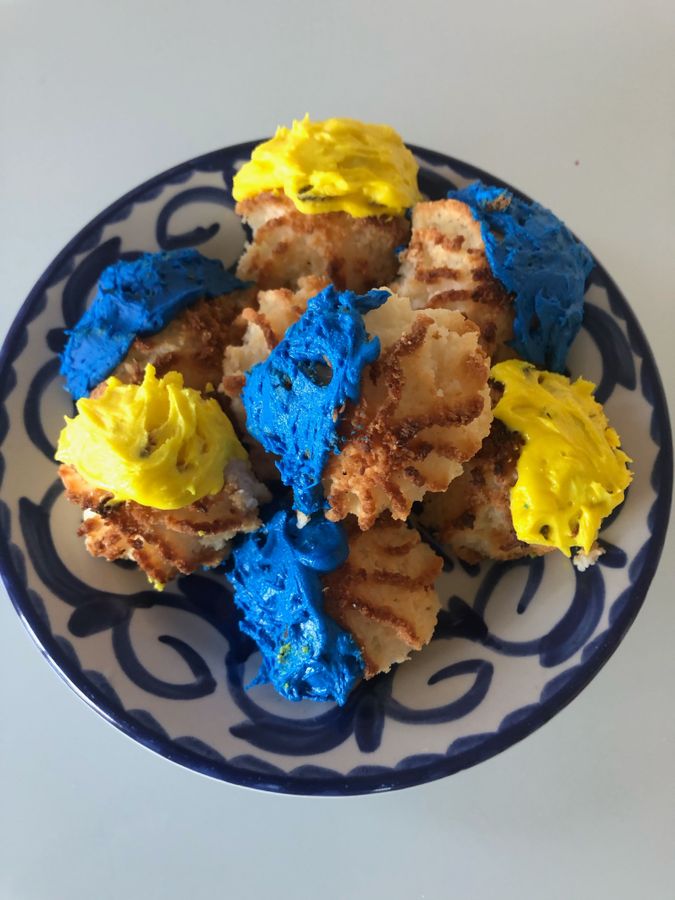 Suzi Appelbaum used blue and yellow icing, the colors of the Ukrainian flag, for her holiday sweets. By Suzi Appelbaum

“Passover,” said Appelbaum, “is about freedom. We need to show our ‘outstretched arm’ to Ukrainian refugees just as God stretched out his hand to the Israelites fleeing the Egyptians.”

She also made a point of buying kosher Moldovan wines for Passover, to support the people of Moldova who have been housing and caring for Ukrainian refugees.

Appelbaum is not alone in seeing the parallels between the Passover story and the current situation in Ukraine. Individuals and a wide array of organizations are finding ways to keep the conflict top of mind by incorporating readings, symbolic foods, and charitable gifts into the planning that leads up to the Seder and to the Seder itself.

Reena Levine Seltzer, a clinical psychologist, has created name cards in the shape of sunflowers, the national flower of Ukraine, for the 30 guests she expects at her Seders. She will add a dish of sunflower seeds to her Seder plate, and she plans to read a prayer for Ukraine, written by Brandeis University professor Reuven Kimelman, during an added fifth cup of wine. 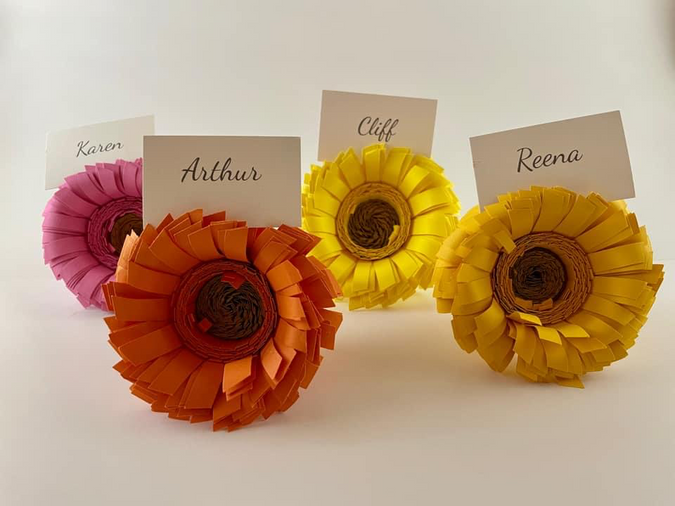 Archie Gottesman, the co-founder of JewBelong, an organization that targets outreach to disengaged Jews, is encouraging people to add “peace olives for Ukraine” to their Seder plate and to eat an olive while thinking of the war’s victims. ]An accompanying reading reminds participants that, “The Jewish community of Ukraine isn’t reclining tonight.”

Chabad is heavily invested in Jewish life in Ukraine. According to Chabad’s Motti Seligson, most of the Jewish infrastructure in Ukraine was built by his organization. Seligson suggests that anyone who makes a Seder anywhere in the world add an additional seat and fill it with one more person. “Open your Seders up and invite more people in,” said Seligson. “Fill the extra seat at your table because there are so many Jews who will have a hard time attending a Seder in Ukraine.”

For those within Ukraine and for those who have escaped to nearby countries, organizations are scrambling to get kosher-for-Passover provisions to them in time for the holiday.

Hindy Poupko, deputy chief planning officer at UJA-Federation of New York, reported that last week, UJA coordinated a one-day Passover food drive with four synagogues in Manhattan, Long Island and Westchester. More than 12,000 pounds of packaged foods were collected, then packed up by the Metropolitan Council on Jewish Poverty, and flown to Eastern Europe for distribution to Ukrainian Jewish communities.

“I have witnessed unprecedented levels of cooperation among Jewish organizations,” said Poupko. There is, she said, “an incredible desire in the New York Jewish community to meet this moment.” And given that Passover and Easter fall at the same time this year and that the suffering extends far beyond Jewish people, UJA, said Poupko, “is working to ensure that within Ukraine there are opportunities for non-Jewish communities to have culturally appropriate food for Easter.”

At the JCC in Krakow, Poland, 150 miles from the Ukrainian border, there is little need to symbolically remember the plight of Ukrainian refugees since the Krakow Jewish community is already deeply involved in supporting them. 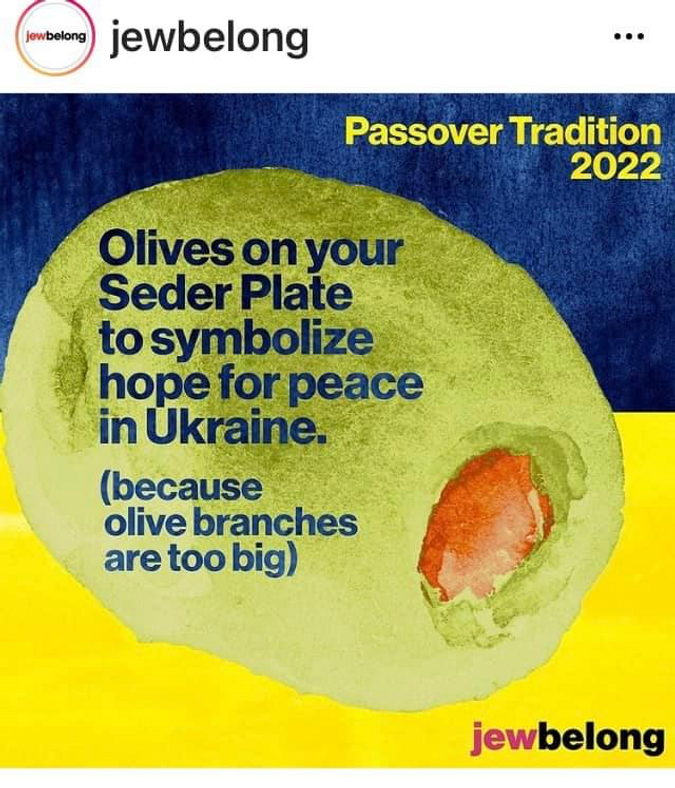 Some American Jews are adding an olive to this year’s Seder place, a symbol of peace. Courtesy of JewBelong

The center has been, “transformed into a humanitarian relief organization,” according to its Jonathan Ornstein, the JCC executive director. They are housing several hundred people in hotel rooms and apartments, distributing supplies like food, medicine, toiletries, toys and clothes. And they are planning for the upcoming Seders.

In addition to the multiple Seders the Krakow JCC holds every year for young families, students and Holocaust survivors, this year the Center will hold a separate Seder for Ukrainian refugees conducted in Ukrainian.

“Every year, I find it amazing to be at a Seder with Holocaust survivors,” said Ornstein. “These people don’t have to imagine what it was like to be slaves. They themselves were slaves. This year we will also have people who are seeking freedom, and we will do what we can to support them.”

Ornstein’s wife, Kasia Leonardi, whose grandmother is from Ukraine, will be preparing Ukrainian food for the Seder: beetroot salad with chopped apple and raspberry vinaigrette, “Jewish caviar” made from mushrooms fried with onions and mixed with chopped egg and chicken stuffed with prunes and apples and cooked in wine. 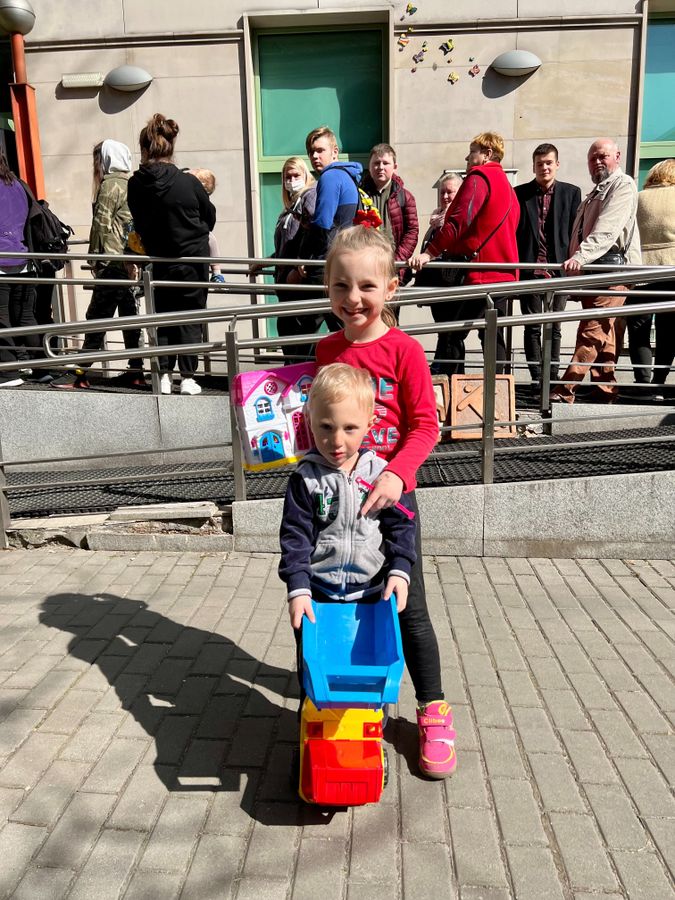 Ukrainian children outside the JCC Krakow, where families will receive Passover items. By JCC Krakow

Ornstein is also working with UJA, the Joint Distribution Committee and the Israeli humanitarian organization NATAN to organize a Seder near Przemysl, on the Polish-Ukraine border, a bit before Passover. Reform rabbis from the United States will travel there to lead this seder.

Rabbi Menachem Creditor, the Scholar-in-Residence at UJA New York, recently returned from a mission to the Ukrainian border to see the humanitarian crisis caused by Russia’s invasion of Ukraine. Next week, when he co-leads a Seder outside of Atlanta, Georgia at Ramah Darom for several hundred people, he plans to share some of his experiences from his mission with the Seder attendees.

“It is impossible to tell the story of freedom without recognizing that it is at best partial,” he said. “Liberty and dignity being stolen from millions and millions of Ukrainians have to figure prominently in any Jewish telling of the story.”

Blue and yellow macaroons? Jews find ways to add Ukraine to their Seders