‘This bond of friendship and love’: How Jackie Robinson became a young Jewish boy’s lifelong friend 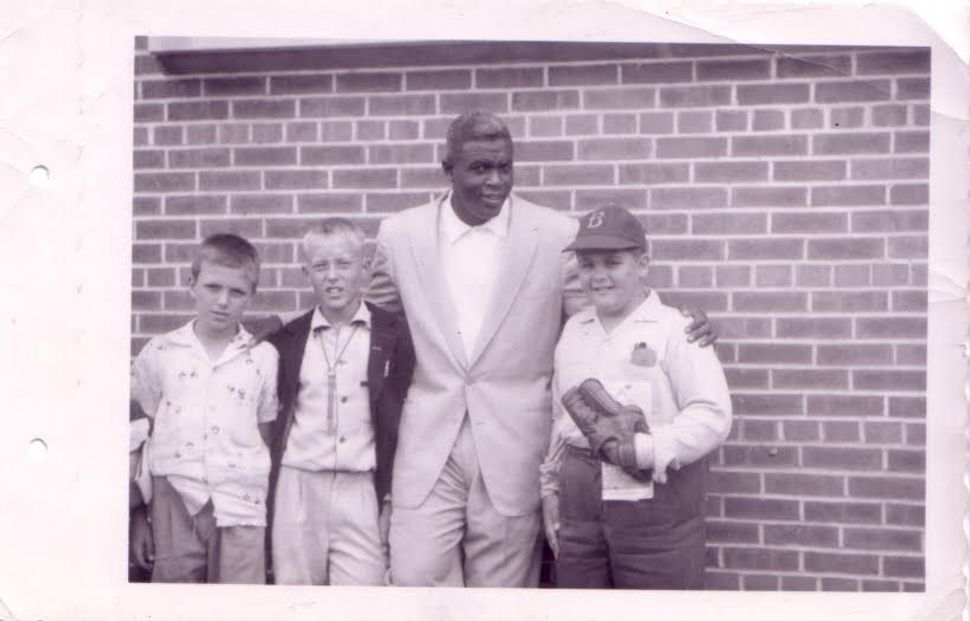 In the 1950s, Jackie Robinson became penpals with a Jewish kid from Wisconsin, sang to him at his 10th birthday party and congratulated him on his bar mitzvah.

On Friday, when baseball marks the 75th anniversary of Robinson breaking the color barrier, Ron Rabinovitz will remember his boyhood hero -– as a civil rights icon but also as a friend.

“We were so different,” Rabinovitz said. “I was white. He was Black. I was Jewish. He was Christian. I was a kid. He was an adult. I was from a little town in the Midwest. He was from a large city out east. And yet, there was this bond of friendship and love.” 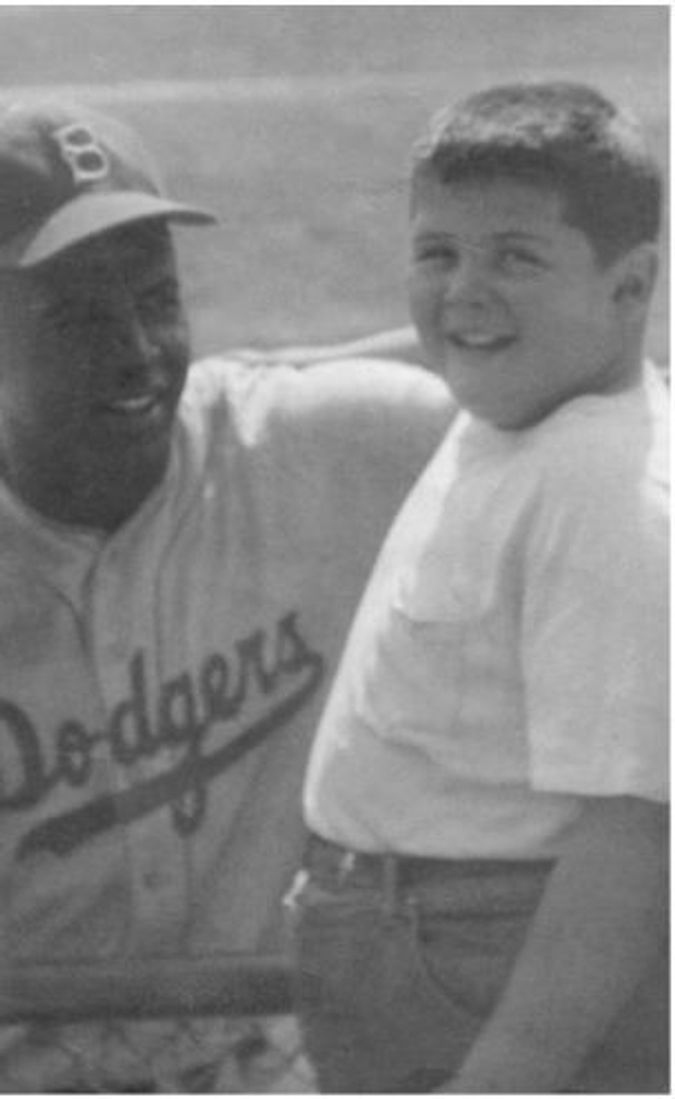 The story of Rabinovitz’s relationship to Robinson is a small chapter in the baseball legend’s life. But it’s also a testament to the strong man’s gentle side and loyalty. Robinson didn’t just write a few letters to the young Rabinovitz. He kept up with him long past his days on the diamond. And he taught him, close up, how friendship can transcend differences.

A letter from Jackie

Ron’s father, David Rabinovitz, a lawyer active in the civil rights movement and a Democratic National Committeeman for Wisconsin, began the family’s relationship with Robinson with a fan letter. He wrote, in a 1953 note, how much his seven-year-old son admired him.

“One day I came home from school and face down on my bed was an envelope – the back said ‘Jackie Robinson,’” Ron Rabinovitz said in a recent interview, his voice still filled with excitement nearly seven decades later. “In the envelope was an autographed picture and letter. He said the next time the Dodgers are in Milwaukee he’d love to meet me.”

The Rabinovitz family lived in Sheboygan, about 60 miles north of Milwaukee, which had just landed a major league team that season when the Braves relocated there from Boston. So Ron and his dad went to the ballpark to see the Dodgers take on the Braves.

After the game Rabinowitz waited for Robinson outside the locker room. “And when he came out the door I ran over to him, along with about 50 other kids waiting for autographs,” Rabinovitz recalled. “I said, ‘Jackie, I’m Ronnie Rabinovitz, do you remember me?’ He says, ‘Sure I do!’” Robinson urged the boy to stay in touch.

When he got home, young Ronnie wrote a letter simply addressed to, “Jackie Robinson, Stamford, CT” – no address, no ZIP code. “I said ‘It was nice to meet you, I appreciate your kindness, and I’d love to hear from you again,’” Rabinovitz said. “He wrote back to me. We were like penpals. I received 20 letters from him as a kid.” When the Dodgers would come to town, Robinson would often have lunch or dinner with the family. 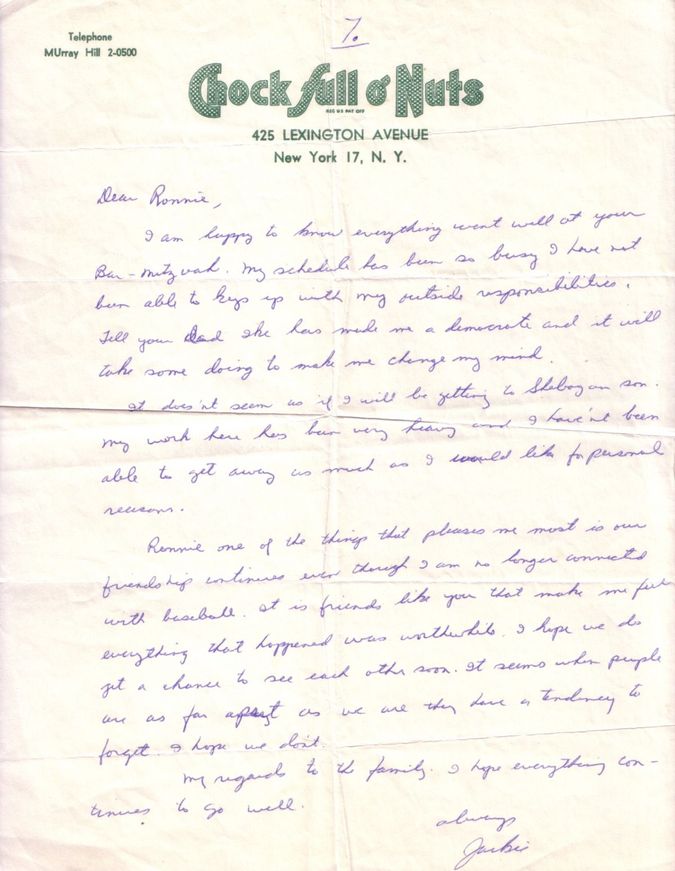 Confiding in a kid

Two years later, in September 1955, Robinson homered in a game in Milwaukee and waved to Rabinovitz as he rounded the bases. That night, he got in a car with the family and drove to a downtown Milwaukee restaurant for Ron’s 10th birthday party. The following month, the Dodgers beat the Yankees in the World Series – the team’s only championship in Brooklyn.

“To have Jackie Robinson sing ‘Happy Birthday’ was probably the best birthday I ever had,” Rabinovitz said. He recalled that Robinson and his father talked politics that night. David Rabinovitz was friends with then-Sen. John F. Kennedy – Ron Rabinovitz said his father was the first person in Wisconsin to endorse his 1960 presidential run – but Robinson would side with the Republican nominee, Richard Nixon. 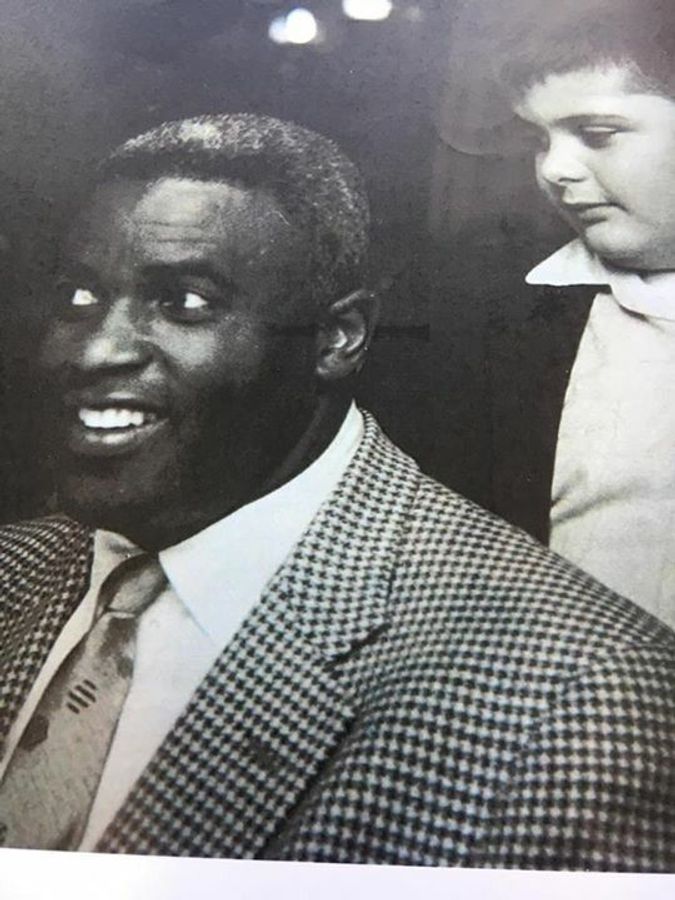 In 1956, Ron Rabinovitz saw Robinson, by then 37, misplay an outfield line drive in Milwaukee, and the ball rolled all the way to the fence.

“That night we had dinner together, and I said, ‘Jackie, that was a tough play,’” Rabinovitz said. Robinson replied that a rookie outfielder named Sandy Amoros would have made the play, then confided: “I’m going to tell you a secret that nobody else knows except my own family – I think this will be my last year in baseball.” And Robinson did wind up retiring after the season.

But he and Rabinovitz stayed in touch.

“Ronnie, one of the things that pleases me most is our friendship continues even though I am no longer connected with baseball,” Robinson wrote to Ron in a letter congratulating him on his bar mitzvah. “It is friends like you that make me feel everything that happened was worthwhile.”

Robinson devoted his life after baseball to civil rights — writing columns and speaking across the country, including at the 1963 March on Washington. He continued to make trips to Wisconsin, for sports banquets or in connection with the National Conference of Christians and Jews.

Around 1960 or 1961, when Rabinovitz was a teenager, Robinson came for a visit and stayed overnight with the Rabinovitz family.

“I was having a catch with my dad on the front lawn, and a neighbor stops by,” Rabinovitz recalled. “And my dad tells him that Jackie Robinson’s going to be staying at our house. And the neighbor said, ‘You mean to tell me you’d let Jackie Robinson sleep at your house?’

“My dad said, ‘Of course I would. I’d love to have him build a house next to me.’ My neighbor said, ‘Boy, I sure wouldn’t.’ My father looked him straight in the eye and said, ‘Ben, I don’t think that would be the real question. The real question would be whether Jackie Robinson would want to live next to you.’” 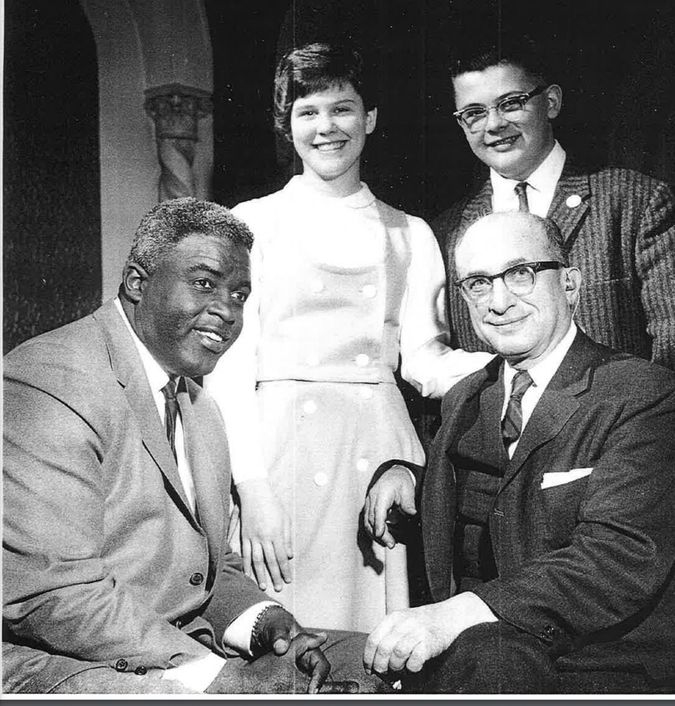 Things got worse after the family dropped Robinson off at the airport. When they went to David Rabinovitz’s law office, they saw someone had spray-painted a sign that said, “Rabinovitz is bringing (n-words) to Sheboygan.”

“I was crying. My dad got a pail and brushes and wiped it all down. I couldn’t believe someone would be that terrible.”

Standing up for the Jews

Robinson had a track record of confronting prejudice aimed at Jewish people. In 1962, for example, he wrote a column condemning antisemitism in the wake of a protest by Black nationalists against the owner of the Apollo Theater in Harlem, Frank Schiffman. Angered at his plans to open a restaurant that would offer lower prices than a Black-owned restaurant, they had signs and posters that mocked Schiffman as a “Shylock.”

“I have resented bigotry in any form, and I couldn’t understand when no one came to Schiffman’s aid,” Robinson wrote in his 1972 autobiography, I Never Had It Made. “I was ashamed to see community leaders who should have known better afraid to speak out when blacks were guilty of blatant antisemitism – even if they were only a handful of blacks. How could we stand against anti-black prejudice if we were willing to practice or condone a similar intolerance?”

He worked as a manufacturer’s rep in children’s clothing, and when business took him to New York, he’d get together with Robinson. About six months before Robinson’s death in October 1972, they had lunch in the city, and Rabinovitz had to help his hero into the restaurant – the former athlete was suffering from diabetes and was partially blind.

“I felt so sad because I remembered him dancing up and down the baselines, driving those pitchers crazy,” Rabinovitz said. “After lunch, I hailed him a cab, I leaned in and kissed him on the cheek and told him how much I loved him. And as that cab disappeared into space, I had tears running down my cheeks, as I knew I’d probably never see him again.”

But Robinson, who died in 1972, remains part of Rabinovitz’s life. He co-authored a book called Always, Jackie, which Amazon named among the best nonfiction children’s books for January 2020. The title is a nod to how Robinson would sign his letters to the boy. Their relationship was also the subject of an MLB Network Documentary called “Letters from Jackie.” And Rabinovitz, who lives in Minneapolis, speaks to kids at Target Field, home of the Minnesota Twins, about his relationship with Robinson.

The 75th anniversary of Robinson’s major league debut will coincide with the first night of Passover, which Rabinovitz called “wonderful.”

“He would have loved that. He loved the Jewish heritage.”

‘This bond of friendship and love’: How Jackie Robinson became a young Jewish boy’s lifelong friend