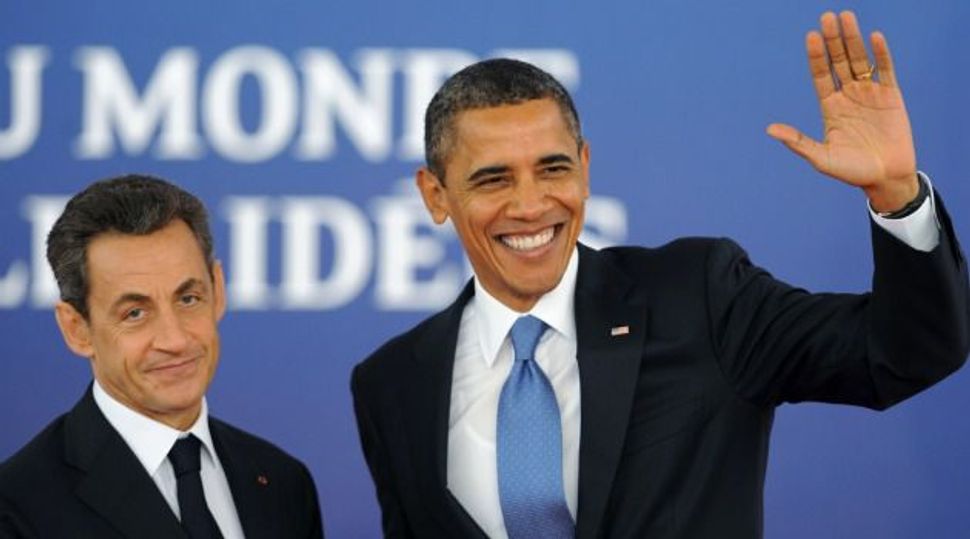 If a remark by French President Nicolas Sarkozy publicized Tuesday is any indication, not much is left of what was once a strong friendship between himself and Prime Minister Benjamin Netanyahu, dating back to when both men were finance ministers.

The French president, unaware last Thursday that a mic in the meeting room at the G20 summit at Cannes was on, was heard calling Netanyahu “a liar” in what he thought was a private exchange with U.S. President Barack Obama. “I cannot bear Netanyahu, he’s a liar,” Sarkozy told Obama, who was also unaware that the mike had been turned on and was being monitored by reporters via the headsets used for simultaneous translations.

“You’re fed up with him, but I have to deal with him even more often than you,” Obama replied, according to wire service reports.

Obama also complained to Sarkozy about France’s vote in favor of Palestinian membership in UNESCO, and asked him to tell the Palestinians to stop their unilateral moves at the United Nations.

“We’ll have to impose economic sanctions on the Palestinians,” Obama said.

Several journalists, including a few from large media organizations, heard the exchange but did not initially report it, agreeing among themselves that to do so would be a violation of journalistic ethics. The remarks appeared Tuesday on a relatively obscure French website that deals with media criticism.

A Reuters reporter, however, confirmed that he had heard the exchange, and neither the White House nor Elysee Palace issued any denials.

It is not the only time recently that Sarkozy has expressed his frustration with Netanyahu.

During a French cabinet meeting a few weeks ago, he told his ministers, “Abu Mazen [Palestinian Authority President Mahmoud Abbas] is a statesman, but Netanyahu never misses an opportunity to disappoint us,” according to a report in Le Canard Enchaine. “Just now he approved the construction of 1,100 apartments in the Arab section of Jerusalem.”

And while Obama has been restraining himself so as not to alienate voters before the 2012 presidential election, his disdain for Netanyahu is well-known.

Former U.S. defense secretary Robert Gates reportedly called Netanyahu “ungrateful” in a meeting with Obama before the former left his post this summer, adding that the prime minister was “endangering his country by refusing to grapple with Israel’s growing isolation.”

The Prime Minister’s Office refused to comment on Tuesday. At the Foreign Ministry, whose head, Avigdor Lieberman, has gotten his own share of insults from Sarkozy, there were some amused responses.

“It’s a good thing the microphones didn’t catch what Merkel told Obama about Sarkozy,” said one senior official, who refused to be named.

Vice Premier Silvan Shalom played down the episode: “Everyone talks about everyone. Sometimes even good friends say things about each other, certainly in such competitive professions,” Shalom told Army Radio. “So you have to consider the main things. Is Obama a friend of Israel’s? Is Sarkozy a friend of Israel’s? Is their policy a consistent policy of support for Israel? The answer to all of these questions is affirmative and, as far as I’m concerned, that is what’s important.”

The exchange between Sarkozy and Obama is not exceptional; it represents the increasing contempt and frustration many world leaders feel for Netanyahu and the wavering position of the Israeli government in the international arena. Though Netanyahu promised nearly three years ago that he would deliver “surprises” with regard to the peace process and implement historic measures, many world leaders have stopped believing him.

Other world leaders, such as British Prime Minister David Cameron, have simply taken to avoiding Netanyahu.

Meanwhile, two of Netanyahu’s only friends of late, Italian Prime Minister Silvio Berlusconi and Greek Prime Minister George Papandreou have both vowed to resign over the economic crisis.