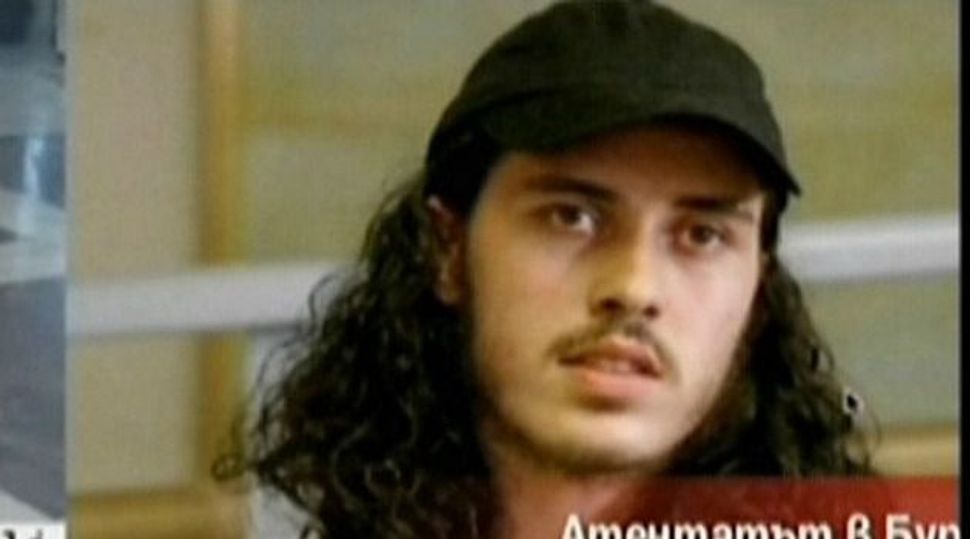 Jihadi: Officials denied reports that Mehdi Ghezali, an Islamic militant who did time at Guantanamo Bay, is suspected in the suicide bombing that killed seven in Bulgaria. He is shown here on Bulgarian television.

U.S. and Swedish officials denied widespread reports that the suspected suicide bomber who blew up a bus of Israeli tourists in Bulgaria was an Islamic militant from Sweden who served two years at Guantanamo Bay.

The reports named the long-haired suspect as Mehdi Ghezali, a Swedish citizen, with Algerian and Finnish origins, the Times of Israel reported, quoting Bulgarian reports.

Ghezali, who was held at Guantanamo Bay from 2002 to 2004, once studied at a Muslim religious school and mosque in Britain, the paper said, and traveled to Saudi Arabia, Afghanistan, and Pakistan. Ghezali was held at the Guantanamo Bay detainment camp in Cuba, after he was captured in Pakistan for being an ?unlawful combatant,? Haaretz said.

He was also reportedly arrested after trying to cross into Afghanistan in 2009, but was apparently later released.

MSNBC reported that U.S. officials denied that Ghezali was the bomber. Swedish officials also denied the link. Neither country has said if it knows the actual identity of the bomber.

The bomber had a fake Michigan?s driver?s license, ABC reported, displaying an image of the license with the name Jacque Felipe Martin.

The attack, which occurred Wednesday in the Burgas airport, killed five Israelis and wounded 34.

According to the image obtained by ABC, the license read ?Michigan Operator?s License? and showed a fake Louisiana address, which is actually that of a casino called the Belle of Baton Rouge.

The man in his mid-30s, long dark curly hair under dark blue cap, roamed for an hour under the gaze of surveillance cameras through airport buildings and around the car park. Surrounded by Israeli tourists, among tens of thousands who visit Bulgaria every year, it seemed to be just a matter of choosing his target.

He settled eventually on a light coloured double-decker bus.

As he moved along with tourists filing through the bus, he t riggered the bomb in the rucksack, unleashing an explosion that killed five Israelis, the Bulgarian bus driver and himself. The blast bl ew out windows, ripp ed back the bus roof and sent a pall of black smoke over the airport.

?All of them were screaming and running. Some were screaming Jewish names. It was such a panic they didn?t have (any) idea where to go or what to do,? said airport official Svetlin Mirchev.

?It was a massive explosion,? Mirchev said, standing in bright sunshine beyond the cordoned-off site of the bombing.

The victims were among some 150,000 Israelis who come to the Bulgarian Black Sea every year, drawn by sandy beaches, historic towns and relatively low costs. With no record of such attacks, Bulgaria, however, may have been seen as a ?soft? target by militants seeking Israeli victims.