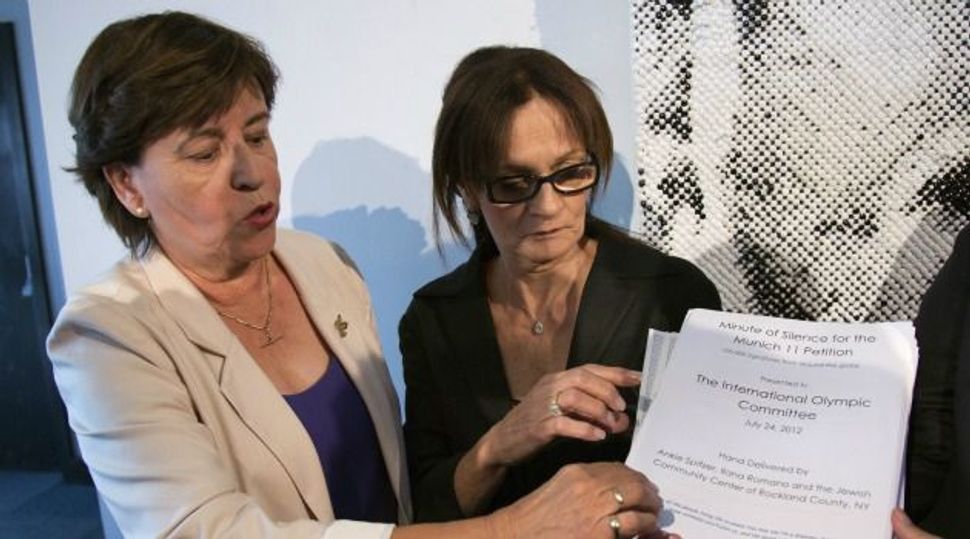 Widows Rejected: Even though the Olympics organizers refused their request for a moment of silence, the widows of Israeli athletes slain in Munich gathered 20,000 people for ceremonies. Image by getty images

A short memorial service at the Israeli Embassy that was organized by the Zionist Federation was streamed live online Friday, according to the London Jewish Chronicle.

About 200 people marked the Minute for Munich in Trafalgar Square, reciting memorial prayers and lighting memorial candles. Afterwards, they waved British and Israeli flags in front of media covering the event.

“The British Jewish community is showing its solidarity with our brothers and sisters in Israel,” the British Israel Coalition’s Ari Soffer told the crowd, according to the Chronicle. “We should not allow this tragedy to go uncommemorated. This is a time to show our respect and remember the dead.”

The families of the victims of the 1972 Munich massacre, in which 11 Israeli Olympics athletes and coaches were murdered by Palestinian terrorists, have mounted a global campaign to get the International Olympic Committee to hold an official moment of silence at the Games. The IOC continues to reject the call, despite its being endorsed by President Obama, GOP presumptive presidential nominee Mitt Romney, the U.S. Senate, the German Bundestag, the Canadian and Australian parliaments, about 50 members of the British Parliament, the Israeli government and Jewish organizations worldwide.