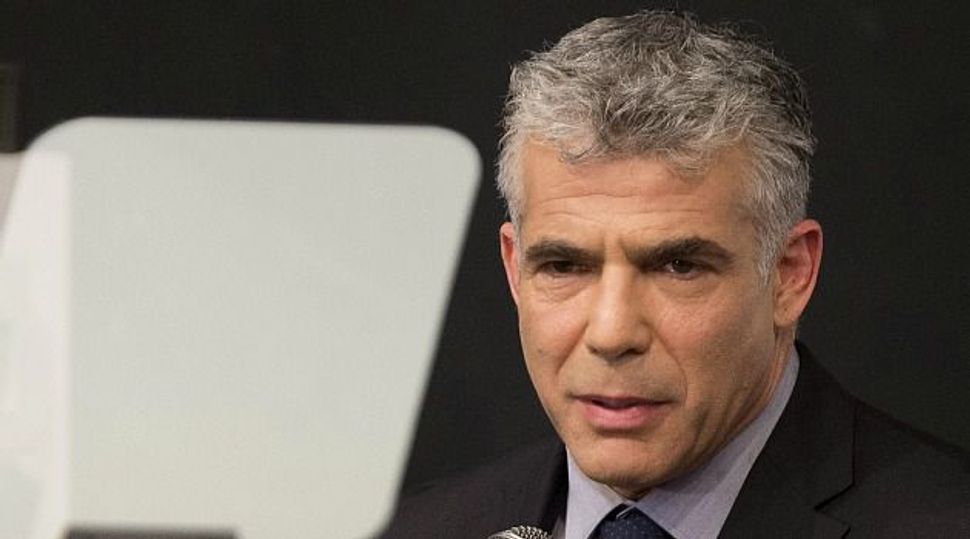 A TV personality-turned-politician whose centrist party could be a key player in Israel’s parliament after elections made a bid for right-wing voters on Tuesday with a call for Palestinians to accept some Israeli West Bank settlements.

Yair Lapid, head of the Yesh Atid (There is a Future) party gave his first speech on Israel’s relations with the Palestinians at a settlement in the occupied West Bank, a move commentators said was calculated to appeal to voters from Prime Minister Benjamin Netanyahu’s right-wing Likud party.

Lapid said that only granting Palestinians their own state could end the conflict but that “The Palestinians will have to recognise that reality has changed since 1967 and the settlement blocs will stay within Israeli borders.”

Polls show Yesh Atid, formed this year by Lapid, formerly anchor of a popular television news show, winning up to 15 of parliament’s 120 seats in the Jan. 22 vote.

Most polls predict right-wing and religious parties closely allied with Netanyahu will win a solid majority in the election. But the prime minister drew criticism from some in Likud when he announced last week he was merging the party with Foreign Minister Avigdor Lieberman’s ultra-nationalist Yisrael Beitenu.

While some polls have shown Netanyahu’s merged party may win up to 42 seats, as much as they jointly hold today, commentators say the move could backfire with Lieberman’s hardline views driving voters away.

Speaking at the Ariel settlement bloc, Lapid accused Netanyahu of failing to revive peace negotiations that broke down in 2010 in a dispute over settlement construction. Yesh Atid will not join a government that does not return to talks, he said.

Israel has sent mixed signals in the past over whether the Ariel enclave, with a population of 17,000, would be included among major settlement blocs it says will remain in Israeli hands permanently after any peace deal.

The Palestinians want to establish a state in the West Bank and the Gaza Strip with east Jerusalem as its capital. Israel captured those territories in a 1967 war. The Palestinians say that Israeli settlements deny them a viable contiguous state.

In another nod to the right, Lapid said Jerusalem was non-negotiable. ” Jerusalem will remain under Israeli sovereignty and will not be divided,” Lapid said. Israel annexed east Jerusalem in a move that was not recognised internationally.

Lapid challenged Netanyahu’s stance on Iran, saying Israel should rely on international pressure to curb what Israel and the West believe is Iran’s drive toward nuclear weapons. The Netanyahu government has said in the past it could use force.

Meanwhile, two wild cards could threaten Netanyahu’s lead. Former centrist prime minister Ehud Olmert and his ex-foreign minister Tzipi Livni are mulling comebacks and are expected to announce in the coming weeks whether they are joining the race.