Israel’s Next War? Could Be Gaza, Not Iran or Syria 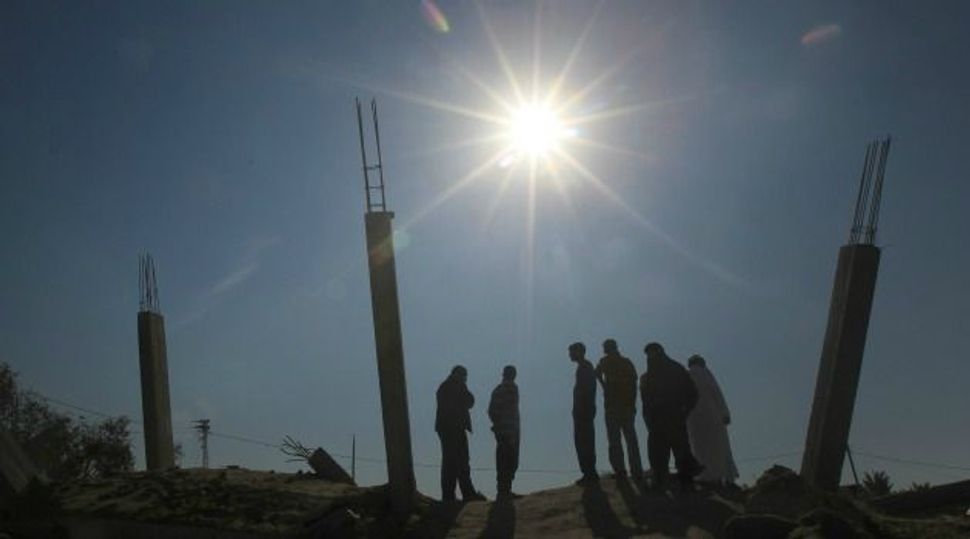 If Israel goes to war with any of its neighbours before this year ends it will be with Gaza not Syria, despite appearances.

The Israeli army fired into Syria on Monday for the second day in a row, after a Syrian mortar round from fighting across the disengagement line hit the Israeli-controlled Golan Heights.

Sunday’s Israeli missile was a warning shot. Monday’s tankfire scored a direct hit, the army said. There was no immediate word on any casualties. But it was the “message” Israel had warned would come.

Syrian rebels fighting to topple President Bashar al-Assad have been fighting his army for months in towns inside and adjacent to the Area of Separation between Israel and Syria, along the disengagement line drawn at the end of their 1973 war.

Technically they are still at war, but it is a cold war.

For almost 40 years the Golan has been one of Israel’s quietest fronts, and despite the close-up view of the Syrian civil war they now have from windy Golan outposts, Israeli generals are not expecting things to heat up in the north.

“In my estimation, there is almost no doubt that he as no interest in opening a front,” Yaalon said of the beleaguered President Assad. “All he needs now would be for us to hit him.”

But down south, real war clouds are gathering over the Gaza Strip, the blockaded coastal enclave from where Islamist Palestinian fighters are firing rockets at Israel, and in return are being picked off by Israeli air force strikes.

“In the past month, over 20 terrorists and some civilians have been killed in the Gaza Strip and dozens have been wounded,” Israeli Defence Minister Ehud Barak said on Sunday. “The shooting has not stopped even today, even at this hour.”

Unlike the Golan, where 1,000 United Nations peacekeepers patrol the farmland and hills separating Syrian and Israeli army positions, Gaza has no referee to keep the peace. It is fenced off, but the Israel army patrols both sides of the fence.

In December of 2008, repeated rocket fire that was spreading fear and misery among communities in southern Israel triggered an Israeli onslaught. Operation Cast Lead began with a week of bombing and shelling, followed up by a ground offensive.

Some 1,400 Palestinians were killed, the majority civilians, and 13 Israelis lost their lives. Israel was strongly condemned by critics who called it a disproportionate use of force.

But after a years-long spell of relative calm, the low-level conflict with Gaza has intensified this year, with waves of retaliatory violence flaring ever more frequently.

The last burst was just two weeks ago. Ominously, the Islamist Hamas movement, which rules the enclave and dominates smaller militant groups, has stopped trying to keep the peace and reverted to firing its own rockets along with Islamic Jihad and others.

“Under my instruction the IDF … is exploring the possibilities of increasing the reponse to Hamas and the other terror groups and we will hit the terror groups at an ever-growing pace,” he said on Sunday.

“If we are forced to go back into Gaza in order to hit Hamas and restore calm, we will not hesitate to do so.”

Helped by Iran and the flourishing contraband trade through tunnels from Egypt, Gaza militias have smuggled in better weapons since the war of 2008-09, including longer-range Grad rockets and anti-tank missiles, one of which they fired last week at an IDF patrol vehicle.

But Gaza’s estimated 35,000 Palestinian fighters are still no match for Israel’s F-16 fighter-bombers, Apache helicopter gunships, Merkava tanks and other modern weapons systems in the hands of a conscript force of 175,000, with 450,000 in reserve.

Yet this massive deterrent is not working.

Yaalon says there is no “bang and we’re done” solution to a Gaza enclave ruled by a group which refuses to accept Israel’s right to exist and demonstrates its commitment to “resistance” by fighting, even if it courts a hammer blow.

But in the past, the minister said, “targeted killings of Hamas leadership brought months of quiet”. Quoting Prime Minister Benjamin Netanyahu, he said: “We will need to toughen our response until Hamas will say ‘enough’ and end the fire.”

On Monday, with stormy weather perhaps helping to keep a lid on further clashes, an official in Gaza said Egypt was once again stepping into the breach to mediate a ceasefire.

“Nothing has yet been formalised. Israel and Hamas maintain their usual position: calm for calm and escalation for escalation,” he said. “Egypt is trying to get Islamic Jihad and others to stop rockets in return for Israel stopping strikes.”

Hamas has been emboldened by the Arab Spring, which toppled the Western-backed Hosni Mubarak and placed Egypt under the Muslim Brotherhood of President Mohamed Mursi. He has kept his distance from Israel, though he has not endorsed Hamas attacks.

“War against Gaza is no longer a picnic,” Youssef Rizqa, an adviser to Hamas prime minister Ismail Haniyeh, wrote in Felesteen newspaper of the region’s new diplomatic environment.

Mursi was now Gaza’s “safety net”, he wrote, quoting the Egyptian president’s recent pledge that “we will not allow a new war on Gaza and Palestinian blood is our blood”.

There might be more Israeli assassination attempts on Hamas leaders, he said, but another all-out invasion was unlikely.

If that is the Hamas calculation, it is a risky gamble.

On Sunday, a Jewish family had a narrow escape when a rocket from Gaza hit their house, and a motorist was hurt when another nearly blew his car off the road. If a rocket should, say, hit a school and kill children, Israel’s reaction would be ferocious.

The same sort of tripwire is strung along the Golan Heights, where another Syrian mortar round hit the Israeli side of the disengagement line on Monday. It exploded harmlessly.

Had it inflicted casualties, Israel would have fired back in earnest. But there would be no invasion of Syria on the agenda.

Israel’s Next War? Could Be Gaza, Not Iran or Syria