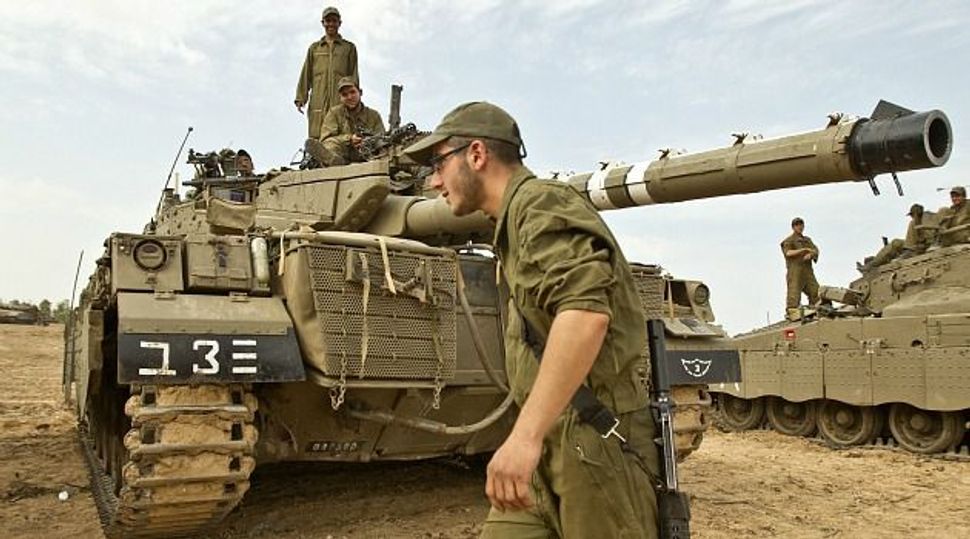 Mass Mobilization: Israeli reservists were called up as soldiers massed near Gaza in preparation for a possible ground assault. Image by getty images

Israeli aircraft bombed Hamas government buildings in Gaza on Saturday, including the prime minister’s office, after Israel’s cabinet authorised the mobilisation of up to 75,000 reservists in preparation for a possible ground invasion.

Palestinian militants in Gaza kept up cross-border salvoes, firing a rocket at Israel’s biggest city Tel Aviv for the third straight day. Police said it was destroyed in mid-air by an Iron Dome anti-missile battery deployed hours earlier, and no one was injured.

Hamas, the Palestinian Islamist group that runs the Gaza Strip, said Israeli missiles wrecked the office building of Prime Minister Ismail Haniyeh – where he had met on Friday with the Egyptian prime minister – and struck a police headquarters.

In the Israeli Mediterranean port of Ashdod, a rocket ripped into several balconies. Police said five people were hurt.

With Israeli tanks and artillery positioned along the Gaza border and no end in sight to hostilities now in their fourth day, Tunisia’s foreign minister travelled to the enclave in a show of Arab solidarity.

Officials in Gaza said 41 Palestinians, nearly half of them civilians including eight children and a pregnant woman, had been killed since Israel began its air strikes. Three Israeli civilians were killed by a rocket on Thursday.

In Cairo, a presidential source said Egyptian President Mohamed Mursi would hold four-way talks with the Qatari emir, the prime minister of Turkey and Hamas chief Khaled Meshaal in the Egyptian capital on Saturday to discuss the Gaza crisis.

Egypt has been working to reinstate calm between Israel and Hamas after an informal ceasefire brokered by Cairo unravelled over the past few weeks. Meshaal, who lives in exile, has already held a round of talks with Egyptian security officials.

Israel uncorked its massive air campaign on Wednesday with the declared goal of deterring Hamas from launching rockets that have plagued its southern communities for years. The salvoes recently intensified, and are now displaying greater range.

The operation has drawn Western support for what U.S. and European leaders have called Israel’s right to self-defence, along with appeals to both sides to avoid civilian casualties.

Hamas, shunned by the West over its refusal to recognise Israel, says its cross-border attacks have come in response to Israeli strikes against Palestinian fighters in Gaza.

“We have not limited ourselves in means or in time,” Israeli Foreign Minister Avigdor Lieberman said on Israel’s Channel One television. “We hope that it will end as soon as possible, but that will be only after all the objectives have been achieved.”

Hamas says it is committed to continued confrontation with Israel and is eager not to seem any less resolute than smaller, more radical groups that have emerged in Gaza in recent years.

The Islamist movement has ruled Gaza since 2007. Israel pulled settlers out of Gaza in 2005 but maintains a blockade of the tiny, densely populated coastal territory.

At a late night session on Friday, Israel’s cabinet decided to more than double the current reserve troop quota set for the Gaza offensive to 75,000, political sources said.

The move did not necessarily mean all would be called up or that an invasion would follow. Tanks and self-propelled guns were seen near the sandy border zone on Saturday, and around 16,000 reservists have already been summoned to active duty.

The Gaza conflagration has stirred the pot of a Middle East already boiling from two years of Arab revolution and a civil war in Syria that threatens to spread beyond its borders.

U.N. Secretary-General Ban Ki-moon is expected to visit Israel and Egypt next week to push for an end to the fighting in Gaza, U.N. diplomats said on Friday.

Hamas’s armed wing claimed responsibility for Saturday’s rocket attack on Tel Aviv, saying it had fired a longer-range, Iranian-designed Fajr-5 at the coastal metropolis, some 70 km (43 miles) north of the Gaza Strip.

After air raid sirens sounded, witnesses saw two white plumes rise into the sky over the southern outskirts of Tel Aviv and heard an explosion when the incoming rocket was hit.

The anti-missile battery had been due to take delivery of its fifth Iron Dome battery early next year but it was rushed into service near Tel Aviv after rockets were launched toward the city on Thursday and Friday. Those attacks caused no damage or casualties.

In Jerusalem, targeted by a Palestinian rocket on Friday for the first time in 42 years, there was little outward sign on the Jewish Sabbath that the attack had any impact on the usually placid pace of life in the holy city.

In Gaza, some families abandoned their homes – some of them damaged and others situated near potential Israeli targets – and packed into the houses of friends and relatives.

The Israeli army said it had zeroed in on a number of government buildings during the night, including Haniyeh’s office, the Hamas Interior Ministry and a police compound.

Taher al-Nono, a spokesman for the Hamas government, held a news conference near the rubble of the prime minister’s office and pledged: “We will declare victory from here.”

A three-storey house belonging to Hamas official Abu Hassan Salah was also hit and totally destroyed early on Saturday. Rescuers said at least 30 people were pulled from the rubble.

In Washington, U.S. President Barack Obama commended Egypt’s efforts to help defuse the Gaza violence in a call to Mursi on Friday, the White House said in a statement, and underscored his hope of restoring stability there.

On Friday, Egyptian Prime Minister Hisham Kandil paid a high-profile visit to Gaza, denouncing what he called Israeli aggression and saying Cairo was prepared to mediate a truce.

Egypt’s Islamist government, freely elected after U.S.-backed autocrat Hosni Mubarak fell to a popular uprising last year, is allied with Hamas but Cairo is also party to a 1979 peace treaty with Israel.

In a call to Netanyahu, Obama discussed options for “de-escalating” the situation, the White House said, adding that the president “reiterated U.S. support for Israel’s right to defend itself, and expressed regret over the loss of Israeli and Palestinian civilian lives”.

But few believe Israeli military action can snuff out militant rocket fire entirely without a reoccupation of Gaza, an option all but ruled out because it would risk major casualties and an international outcry.

While Hamas rejects the Jewish state’s existence, Palestinian President Mahmoud Abbas, who rules in areas of the nearby West Bank not occupied by Israelis, does recognise Israel but peace talks between the two sides have been frozen since 2010.