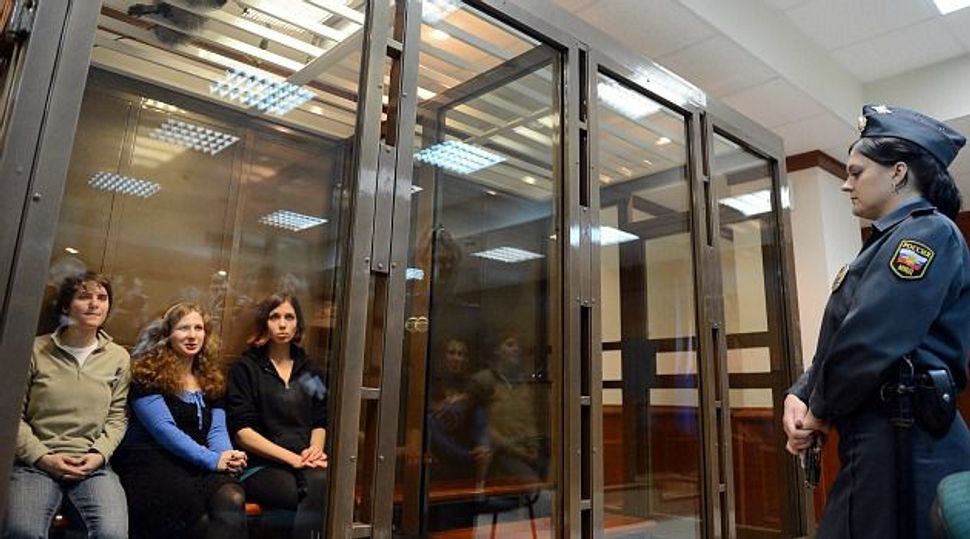 Trumped Up: The Russian punk rock band Pussy Riot appears in court on charges of ?hooliganism.? Image by getty images

Russian President Vladimir Putin has accused a member of the punk protest band Pussy Riot of having committed an anti-Semitic act.

During a televised discussion on Nov. 15 with German Chancellor Angela Merkel in Moscow, Putin said that one of the members of the band had “hanged a dummy of a Jew and said that Moscow should be rid of such people.”

The band’s three members – Maria Alyokhina, 24, Nadezhda Tolokonnikova, 22, and Yekaterina Samutsevich, 29 – had become a symbol for Russian opposition after they were convicted in August of hooliganism motivated by religious hatred.

They were arrested in March after a guerrilla performance in Moscow’s main cathedral, calling for the Virgin Mary to protect Russia against Vladimir Putin, who was elected to a new term as Russia’s president two weeks later.

“We do hear what our partners say. But do they hear what is going on being so far away? Mrs. Merkel spoke about the women jailed for their performance at a church. Does Mrs. Merkel know that one of them had hanged a dummy of a Jew and said that Moscow should be rid of such people?” Putin said at the Petersburg Dialogue forum. “Neither we, nor you can support people who assume anti-Semitic positions,” he said.

Radio Free Europe reported that a small anarchist group called Voina said that Putin was “misrepresenting events” that happened in 2008.

The website of the radio station reported that Voina described the mock hanging as a “protest on the policies of then-Moscow Mayor Yury Luzhkov,” who is not Jewish and who “took a hard line on fringe groups, illegal migrants, and homosexuals.”

The report did not say whether the a dummy hung was meant to represent Luzhkov.