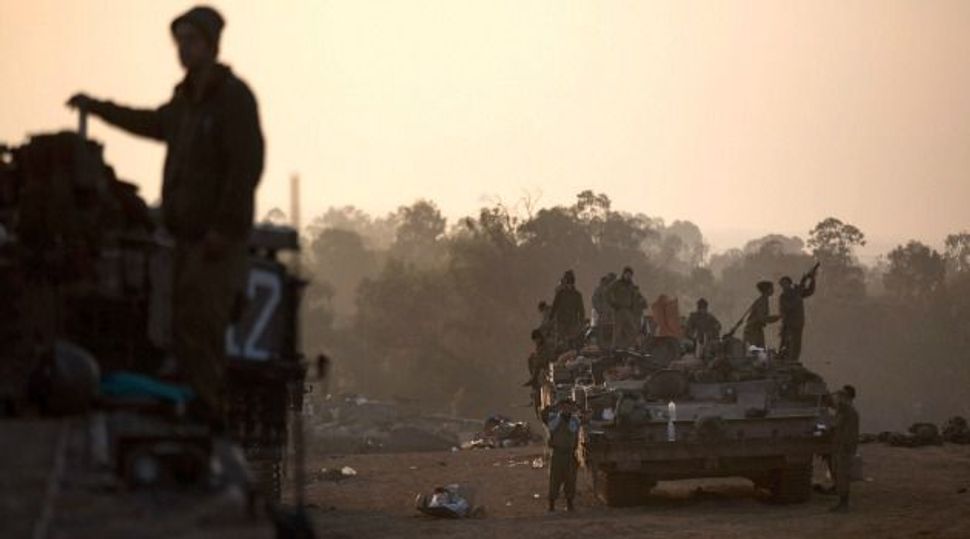 Peace or War? Israeli troops mass along the border with Gaza in preparation for a possible ground invasion. Image by Getty Images

Secretary of State Hillary Clinton met Israeli Prime Minister Benjamin Netanyahu on Tuesday and pledged to work for a truce in the Gaza Strip “in the days ahead”.

As the two began late-night talks in Jerusalem, Palestinian rocket fire and Israeli air strikes continued. Netanyahu said he would prefer a “long-term” diplomatic solution but repeated his readiness to step up an offensive against Gaza’s rocket crews.

Clinton’s outline of further days of negotiation, notably in Cairo with Egyptian President Mohamed Mursi, may dampen talk of an immediate end to a week of violence that has killed over 140 people, most Palestinians but including two Israelis on Tuesday.

Gaza’s rulers, the Palestinian Islamist movement Hamas, revised a statement that a truce would start overnight, saying it was still waiting for an Israeli response to proposals and did not now expect an announcement until Wednesday.

An official in the Egyptian government, whose new, Islamist leadership has been playing peace broker in Cairo, had also said a ceasefire could begin on Tuesday. But Israeli officials continued to say that discussions were still continuing.

Israel pressed on with its strikes in the coastal enclave on the seventh day of its offensive and Palestinian rockets still flashed across the border as Clinton arrived in Jerusalem. She was due to meet Netanyahu around 11 p.m. (2100 GMT).

One Hamas official had said a truce might start at 9 p.m. But after that moment passed, a senior figure in the movement, Ezzat al-Rishq, told Reuters in Cairo: “The truce is now held up because we are waiting for the Israeli side to respond.

“We … must wait until tomorrow.”

The Jewish state launched the campaign last week with the declared aim of halting the rocketing of its towns from the Palestinian enclave, ruled by the Hamas militant group that does not recognise Israel’s right to exist.

Medical officials in Gaza said 27 Palestinians were killed on Tuesday. An Israeli soldier and a civilian died when rockets exploded near the Gaza frontier, police and the army said.

Netanyahu said earlier on Tuesday that Israel was open to a long-term deal aimed at ending Palestinian rocket attacks that have plagued its southern region for years.

Khaled Meshaal, exile leader of Hamas, said on Monday that Israel must halt its military action and lift its blockade of the Palestinian coastal enclave in exchange for a truce.

Both Netanyahu, favoured to win a January national election, and U.S. President Barack Obama have said they want a diplomatic solution, rather than a possible Israeli ground operation in the densely populated territory, home to 1.7 million Palestinians.

Israel’s military on Tuesday targeted more than 130 sites in Gaza, including ammunition stores and the Gaza headquarters of the National Islamic Bank. Israeli police said more than 150 rockets were fired from Gaza by the evening.

“No country would tolerate rocket attacks against its cities and against its civilians. Israel cannot tolerate such attacks,” Netanyahu said with U.N. Secretary-General Ban Ki-moon, who arrived in Jerusalem from talks in Cairo, at his side.

“If a long-term solution can be put in place through diplomatic means, then Israel would be a willing partner to such a solution,” he said. “But if stronger military action proves necessary to stop the constant barrage of rockets, Israel will do what is necessary to defend our people.”

After nightfall, Israel stepped up its Gaza bombardment. Artillery shells and missiles fired from naval gunboats slammed into the territory and air strikes came at a frequency of about one every 10 minutes.

In an attack claimed in Gaza by Hamas’s armed wing, a longer-range rocket targeted Jerusalem on Tuesday for the second time since Israel launched the air offensive.

The rocket, which fell harmlessly in the occupied West Bank, triggered warning sirens in the holy city about the time Ban arrived for truce discussions. Another rocket damaged an apartment building in Rishon Lezion, near Tel Aviv.

Rockets fired at the two big cities over the past week were the first to reach them in decades, a sign of what Israel says is an increasing threat from Gaza militants.

In the Gaza Strip on Tuesday, Hamas executed six alleged collaborators, whom a security source quoted by the Hamas Aqsa radio said “were caught red-handed” with “filming equipment to take footage of positions”. The radio said they were shot.

Militants on a motorcycle dragged the body of one of the men through the streets.

Along Israel’s sandy, fenced-off border with the Gaza Strip, tanks, artillery and infantry massed in field encampments awaiting any orders to go in. Some 45,000 reserve troops have been called up since the offensive was launched.

A delegation of nine Arab ministers, led by the Egyptian foreign minister, visited Gaza in a further signal of heightened Arab solidarity with the Palestinians.

Egypt has been a key player in efforts to end the most serious fighting between Israel and Palestinian militants since a three-week Israeli invasion of the enclave in the winter of 2008-9. Egypt has a 1979 peace treaty with Israel seen by the West as the cornerstone of Middle East peace, but that has been tested as never before by the removal of U.S. ally Hosni Mubarak as president last year in the Arab Spring uprisings.

Mohamed Mursi, elected Egyptian president this year, is a veteran of the Muslim Brotherhood, spiritual mentors of Hamas, but says he is committed to Egypt’s treaty with Israel.

Mursi has warned Netanyahu of serious consequences from an invasion of the kind that killed more than 1,400 people in Gaza four years ago. But he has been careful so far not to alienate Israel, or Washington, a major aid donor to Egypt.