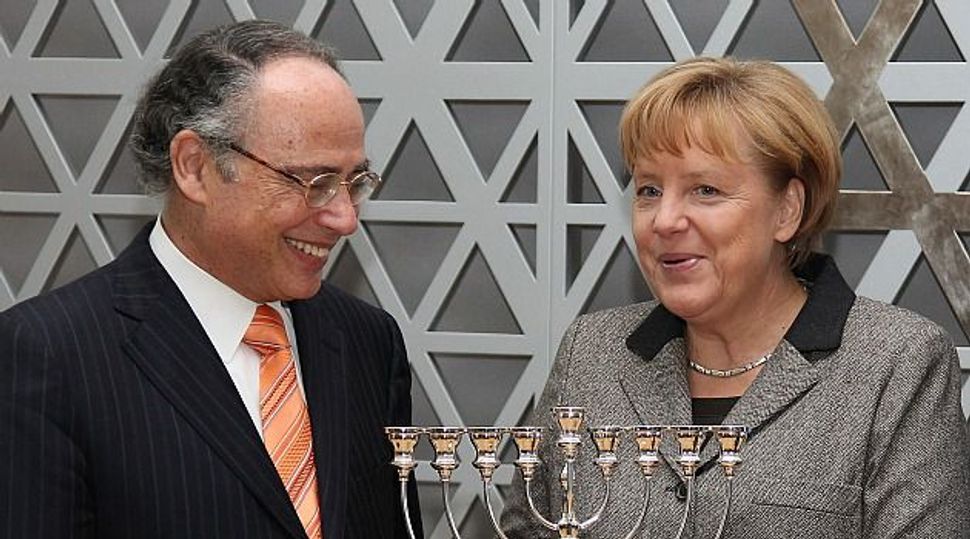 Light of Tolerance: German Chancellor receives a menorah from central council of German Jews leader Dieter Graumann after speaking at a gathering of the Jewish group. Image by getty images

German Chancellor Angela Merkel has renewed her pledge to stand up for Jewish life in Germany and for Israel’s right to self-defense.

Sunday night’s address was the first time that any German chancellor had visited the annual assembly of the Central Council of Jews in Germany.

Sharing the podium with Central Council President Dieter Graumann, Merkel reiterated her longtime commitment to Israel’s security, which she had stated during the recent Gaza conflict. She said it was not only Israel’s right but its duty to protect its citizens from rocket attacks. “Germany also has that right,” she added.

Speaking before 99 delegates to the council and about as many guests, Merkel also said she wanted the Jewish community to know that they are supported and cherished. Recent anti-Semitic attacks on individuals, plus months of debate over the right to ritual circumcision – a discussion often tinged with anti-Semitism – have put the Jewish community under stress, she acknowledged.

“There are still major indications of anti-Semitism here,” Merkel noted. She added that she hoped the new government law designed to protect the right to religious circumcision of boys by Jews and Muslims would be passed before the end of December. Observers have suggested that, should such a law be passed, it might be challenged by opponents, driven to Germany’s Supreme Court and even to the European Court level.

Graumann, who has entered his third year as head of the umbrella organization, praised Merkel’s courage in standing up for both Israel and for religious freedom in Germany.

He said that the community had a difficult summer, including the brutal attack on a rabbi in Berlin, the debate on circumcision and “countless thousands of hateful Internet entries that shocked all of us. We experienced many fanatical finger-waggers, people who express a profound lack of understanding… And it really hurt us.”

Merkel said she, too, had noted the negative tone in the discussion. “It reminds us to think again about the meaning of religious tolerance,” she said, adding that all basic rights have to be balanced so as not to infringe on each other. It is clear, she said, that the rights of children are just as important to Jews as to any other community in Germany. “But the respect for and practice of religious rituals are also a higher good, because evidence of religious freedom is also the fact that it can be practiced.”