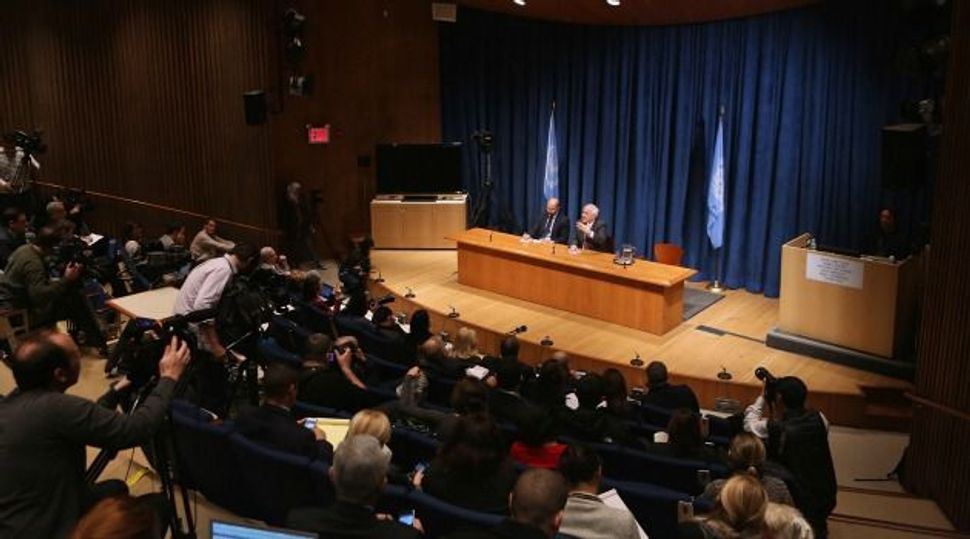 The Palestinian Authority is expected to win an upgrade of its observer status at the United Nations on Thursday from “entity” to “non-member state,” which would amount to implicit U.N. recognition of the sovereign state of Palestine.

Palestinian President Mahmoud Abbas has been leading the campaign to win support for a U.N. General Assembly resolution raising its status. The move comes on the heels of an eight-day conflict this month between Israel and Islamists in the Gaza Strip, who are pledged to Israel’s destruction and oppose his efforts toward a negotiated peace.

Following are questions and answers about the Palestinian move on Thursday – the 65th anniversary of the U.N. vote to partition Palestine into separate Jewish and Arab states – and what it means for the 4.3 million Palestinians in the West Bank and Gaza Strip.

WHAT IS NON-MEMBER STATE STATUS?

The Palestinian Authority is currently considered an “entity,” not a state at the United Nations. If the resolution is approved by the U.N. General Assembly as expected, that status will change to “non-member state,” like the Vatican.

Switzerland also had non-member state status until it joined the United Nations as a full voting member 10 years ago.

Recognition as a non-member state will have a certain symbolic value, giving the Palestinians a higher profile in terms of speaking order during U.N. meetings. But they will still be unable to vote during General Assembly sessions.

The change will also have important legal implications.

CAN THE U.N. RECOGNIZE PALESTINE AS A SOVEREIGN STATE?

The United Nations cannot grant countries recognition. That is something that is done on a bilateral basis. However, the granting of non-member state status to the Palestinian Authority does acknowledge that the majority of U.N. member states do recognize Palestine as an independent state.

Traditionally, universal recognition of state sovereignty is accompanied by full membership in the United Nations. That is something the Palestinians sought last year with much fanfare but failed to achieve because the United States used the threat of a veto in the Security Council to block the Palestinian U.N. membership application.

HOW MANY VOTES DO THE PALESTINIANS NEED?

The Palestinian Authority needs a simple majority for the resolution to pass. Assuming all U.N. member states are present and none is barred from voting for non-payment of dues, the Palestinians will need the support of 97 of the 193 members.

The Palestinians say that 132 countries recognize an independent state of Palestine. They are hoping for over 130 ‘yes’ votes from the assembly and a strong show of support from Europe. U.N. diplomats say it may achieve that.

WILL ANYTHING CHANGE ON THE GROUND AFTER A YES VOTE?

There will be no immediate changes. The West Bank will remain under Israeli occupation and settlement building will no doubt continue. However, the Palestinians say the change in status will alter the rules of the game, arguing that the vote means Israel can no longer call the Palestinian Territories “disputed” land. Instead, the land will have been clearly designated as belonging to the Palestinian people, even if the final boundaries still have to be determined.

The same applies to the Hamas-ruled Gaza Strip. The Palestinian Authority has virtually no influence in the 25-mile-long (40-km-long) coastal enclave where 1.6 million Palestinians live.

WILL ISRAEL AND THE UNITED STATES RETALIATE?

The United States and Israel oppose the Palestinian move, saying direct peace talks are the only way to achieve statehood.

Israel has threatened the Palestinians with retaliation for seeking a U.N. status upgrade. It has suggested that it could withhold some taxes and customs duties it collects on behalf of the Palestinian Authority.

But in the wake of the latest Gaza conflict, Israel seems reluctant to reveal itself as diplomatically isolated. It has toned down threats of retaliation in the face of wide international support for the initiative, notably among its European allies.

Israel may opt for harsh retaliation if the Palestinians file complaints against the Jewish state at the ICC, which U.N. diplomats say is Israel’s main concern at the moment.

The United States has also threatened to withhold financial aid to the Palestinians. If they join any specialized U.N. agencies, Congress will likely seek to cut off U.S. funding to those agencies in accordance with U.S. law.

The United States, which pays 22 percent of the regular U.N. budget, is the biggest financial contributor to the world body.

WHAT ABOUT PEACE TALKS?

Abbas has said he will be ready to revive moribund Israeli-Palestinian peace talks as soon as the U.N. vote is over. That suggests he is prepared to drop a pre-condition that all Israeli settlement building in the West Bank and East Jerusalem should be halted before negotiations can resume.

While a number of EU states have applauded this shift in stance, Israel and the United States say that the Palestinian U.N. move will undermine efforts to revive the talks.

The Middle East peace process has been stalled for two years, mainly over Israeli settlements in the West Bank, which have expanded despite being deemed illegal by most of the world.

Many Western diplomats complain about the timing of the Palestinian move, which comes weeks after U.S. President Barack Obama’s re-election. They say the Palestinians have not given Obama time to push for new peace talks with Israel.

But the diplomats also say that the Palestinian move is no excuse to scrap peace talks. The resolution calls for an immediate resumption of Israeli-Palestinian negotiations.