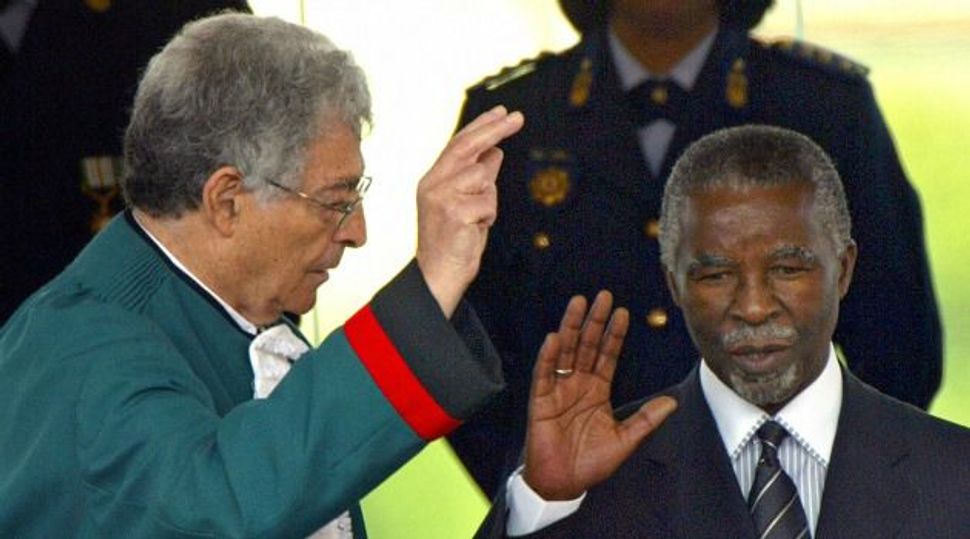 Leaders of South Africa and the country’s Jewish community mourned the death of jurist and anti-apartheid activist Arthur Chaskalson.

Chaskalson, who became the first president of South Africa’s post-apartheid Constitutional Court and the country’s chief justice, died Dec. 1 in Johannesburg at the age of 81. The cause of his death was reported to be leukemia.

“Judge Chaskalson epitomized the qualities of integrity, compassion and an unbending commitment to justice for all,” the South African Jewish Board of Deputies said in a statement. “He brought honor to the legal profession and the bench, as well as to the Jewish community with which he always identified.”

Chaskalson’s official funeral in Johannesburg on Monday was attended by South Africa’s president, Jacob Zuma, and immediate past president, Thabo Mbeki, among other prominent figures. The two men donned yarmulkes and joined other mourners in taking turns shoveling dirt onto Chaskalson’s grave in accordance with Jewish custom.

“On behalf of all South Africans, we reach out to his wife and family as we salute a life inseparable from South Africa’s march to freedom,” Zuma said in a statement.

National flags in South Africa were ordered to fly at half-mast for Chaskalson through Friday.

Chaskalson was a member of the defense team in the 1963-64 Rivonia Trial, in which the apartheid regime tried Nelson Mandela and other African National Congress activists. Over the next several decades, Chaskalson continued to battle as a lawyer against apartheid.

In 1994, after the country’s transition to a multiracial democracy, Chaskalson became the first president of South Africa’s new Constitutional Court. In 2001, his title was changed to chief justice of South Africa, a position he held until he retired in 2005.

He served as president of the International Commission of Jurists from 2001 to 2012.

In January 2009, Chaskalon joined several other prominent South African Jews in a statement that condemned Israel’s Operation Cast Lead in Gaza as “inhumane and disproportionate.”