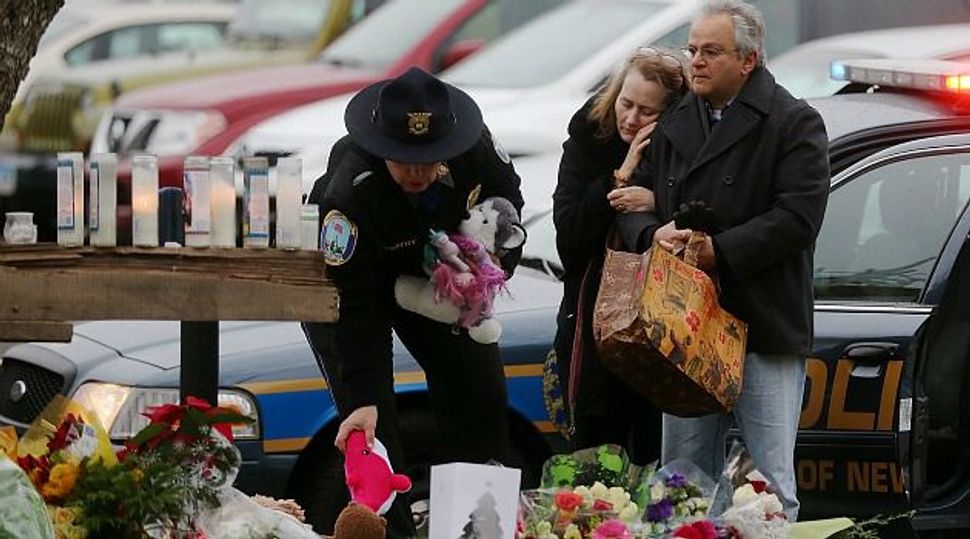 Town of Tears: Newtown residents leave flowers outside the Sandy Hook school where a gunman went on a deadly shooting rampage. Image by getty images

The rabbi of the only synagogue in Newtown, Conn., decried the “culture of violence” that led to the deadly rampage, as President Obama prepared to speak at a vigil for the 28 victims.

Shaul Praver held a community prayer session on Saturday at Adath Israel, and told Israel’s Army Radio Sunday that he castigated the culture that had led to the massacre, according to the Times of Israel.

“We live in a culture of violence,” Praver said he told his congregants, according to the paper. “All of our culture is based on violence and we need to teach the kids about the ways of peace. We need to change everything.”

“There’s too much war, too much violence in our streets,” he added, speaking in Hebrew.

Obama arrives in Connecticut on Sunday to mourn the dead and console the survivors of a gunman’s rampage that killed 20 children, all 6 and 7 years old, after he forced his way into their school and shot them multiple times.

Obama’s appearance at an interfaith vigil in the once-tranquil town of Newtown will be watched closely for clues as to what he meant when he called for “meaningful action” to prevent such tragedies in the wake of the massacre on Friday. A total of 28 people died in the incident, including the gunman.

The president arrives after authorities released the names of the dead on Saturday and more details emerged about the victims and the rampage itself.

After killing his mother at home, Adam Lanza, 20, forced his way into the Sandy Hook Elementary School and started firing at the children, most if not all with a powerful rifle – a military-style Bushmaster .223 M4 carbine – at close range. He also killed six adult women at the school and himself, putting the death toll at 28.

Though Americans have seen many mass shootings over the years, the victims have rarely been so young.

Pope Benedict expressed his pain over the killings, telling crowds of pilgrims gathered in St Peter’s Square in Vatican City on Sunday he was “deeply saddened.”

“I assure the families of the victims, especially those who lost a child, of my closeness in prayer. May the God of consolation touch their hearts and ease their pain,” the pope said. “Upon those affected by this tragedy, and upon each of you, I invoke God’s abundant blessings!”

An appalled and grieving nation learned more about the dead.

Olivia Engel had a part in a nativity play at St. Rose of Lima Catholic Church. “She was supposed to be an angel in the play. Now she’s an angel up in heaven,” Monsignor Robert Weiss told a packed crowd at the church before the play on Saturday.

Emilie Parker, another of the child victims, was studying Portuguese with her father, Robbie Parker, who opened up about his daughter in an emotional news conference in which he turned both glowing and teary.

“As the deep pain begins to settle into our hearts, we find comfort reflecting on the incredible person that Emilie was and how many lives she was able to touch in her short time here on Earth,” Parker said.

“This world is a better place because she has been in it,” he said.

Vicki Leigh Soto, 27, saved her first-grade students’ lives by putting herself between the kids and the gunman. Britain’s Independent on Sunday newspaper splashed her photo on its front page with the caption “The Heroine of Sandy Hook.”

School district officials said classes would resume Tuesday, except at Sandy Hook. As of Saturday night, they were still working on a plan for how and where to let the school’s kindergarten-through-fourth-grade classes resume.

On Saturday, some Democratic lawmakers called for sweeping new gun-control measures, a move certain to encounter forceful opposition from the nation’s pro-gun lobby.

Police said on Saturday they had assembled “some very good evidence” on the killer’s motives but revealed little.

Lanza had struggled at times to fit into the community and his mother Nancy pulled him out of school for several years, to home-school him, said Louise Tambascio, the owner of My Place Restaurant, where his mother was a long-time patron.

Nancy Lanza legally owned a Sig Sauer and a Glock, both handguns commonly used by police, and the military-style Bushmaster long gun, according to law enforcement officials.

His father, Peter Lanza, issued a statement saying the family was in a “state of disbelief.”

“We too are asking why,” the statement said.

The death toll exceeded that of one of the most notorious U.S. school shootings, the 1999 rampage at Columbine High School in Littleton, Colorado, where two teenagers killed 13 students and staff before fatally shooting themselves.

At Virginia Tech, a Blacksburg, Virginia university where in 2007 a gunman killed 32 people in the deadliest school shooting in U.S. history, an announcer extended sympathies to the residents of Newtown before a basketball game on Saturday.