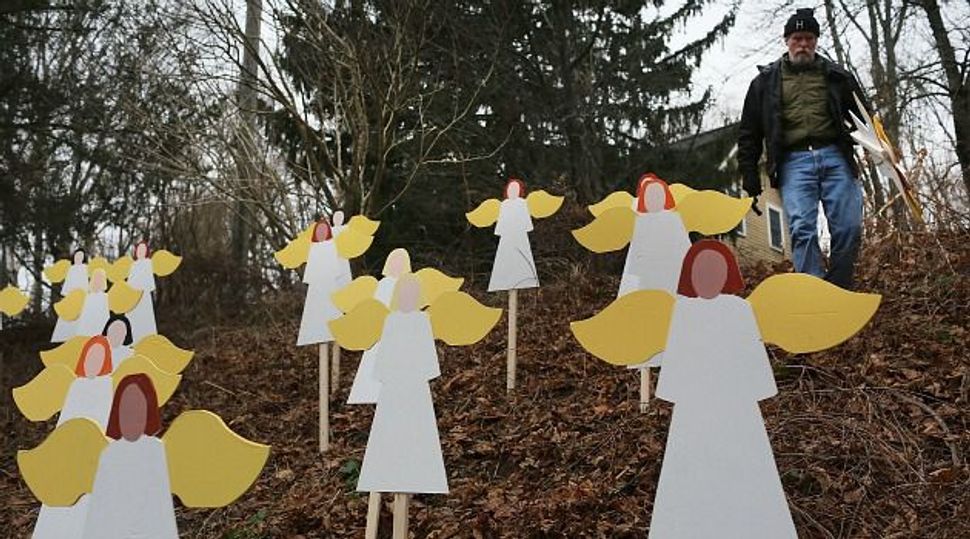 Fallen Angels: Eric Mueller places 27 wooden angels he made in his yard down the street from the Sandy Hook School in Newtown, Conn. Image by getty images

Several Democratic lawmakers called for a new push for U.S. gun restrictions on Sunday, including a ban on military-style assault weapons, in the wake of the Connecticut massacre in which 20 children and six adults were gunned down in a school.

Democratic Senator Diane Feinstein, the author of an assault-weapons ban that lapsed in 2004, said she would introduce new legislation this week. Senator Dick Durbin, the chamber’s No. 2 Democrat, said lawmakers would hold hearings on gun control, and several others said they would devote new attention to the long-ignored issue.

“I think we could be at a tipping point … where we might get something done,” Senator Charles Schumer, another top Senate Democrat, said on CBS’s “Face the Nation.”

Any effort to restrict access to high-powered weapons is likely to face fierce opposition from many Republicans in Congress who say restrictions violate the U.S. Constitution’s right to bear arms.

Gun control has been a low priority for most U.S. politicians due to the widespread popularity of guns in America and the clout of the pro-gun National Rifle Association. Most Republicans and many Democrats, including Senate Majority Leader Harry Reid, are firm allies of the group.

Opinion polls have found Americans to be divided on the issue even after other high-profile shooting incidents.

U.S. lawmakers have not approved a major new gun law since 1994.

Feinstein said her planned legislation would outlaw the high-capacity magazines and military-style assault rifles that have factored in many recent mass shootings, including Friday’s massacre in Newtown, Connecticut. People who own such weapons now would not be required to give them up, Feinstein said.

She said she would introduce her bill in the Democratic-controlled Senate soon, and a companion bill would be introduced in the Republican-controlled House of Representatives.

Connecticut’s Democratic governor and two senators, one a Democrat and one an independent, voiced support for an assault-weapons ban or restrictions on high-capacity magazines.

Asked on “Fox News Sunday” why Americans would need to own semi-automatic weapons, Republican Representative Louie Gohmert said, “Well, for the reason George Washington said: a free people should be an armed people. It ensures against the tyranny of the government, if they know that the biggest army is the American people.”

Gohmert added, “Once you start drawing the line, where do you stop? … Gun laws don’t work.”

President Barack Obama campaigned on gun control in 2008, but he has expanded gun rights in his first four years in office, signing legislation that would allow people to carry weapons on Amtrak trains and in national parks.

He tearfully called for “meaningful action” to prevent further tragedies on Friday, but the White House has declined to say what measures he would support.

New York Mayor Michael Bloomberg, an outspoken gun-control advocate, said Obama will have to make the issue a priority to get any new laws enacted.

“It’s time for the president, I think, to stand up and lead and tell this country what we should do – not go to Congress and say, ‘What do you guys want to do?’ This should be his number one agenda,” Bloomberg said on NBC’s “Meet the Press.”

Connecticut Governor Dannel Malloy, who has met with families of the victims of Friday’s massacre, spoke of the need for new gun control steps.

“These are assault weapons. You don’t hunt deer with these things. And I think that’s the question that a lot of people are going to have to resolve their own minds: Where should this line get drawn?” Malloy added.