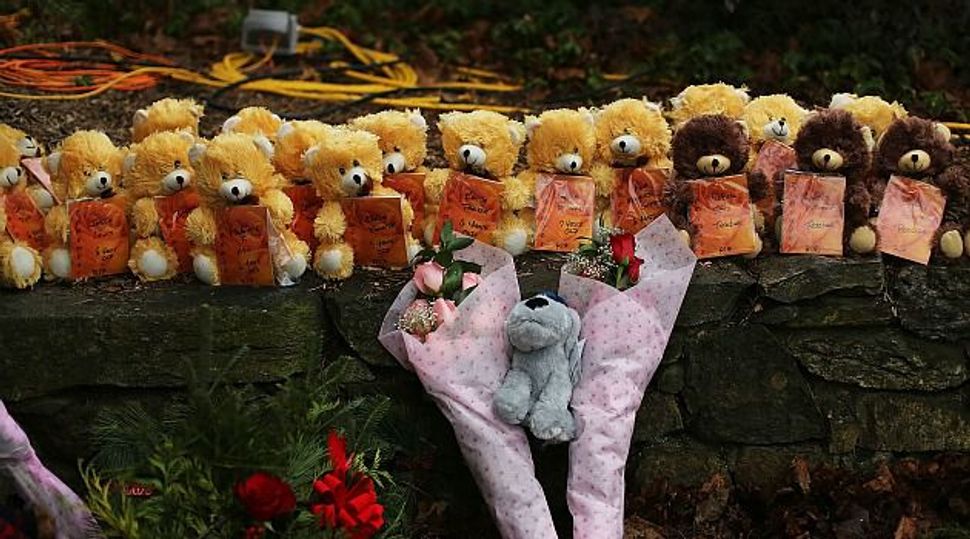 Stricken by Grief: Teddy bears and flowers grace a makeshift memorial to the victims of the rampage in Newtown, Conn. Image by getty images

Rabbi Shaul Praver of Congregation Adath Israel in Newtown, Conn., said he and other clergy are turning to each other to help them find the strength to support their congregants and other community members following the mass slaughter of 26 children and school staff on December 14 at the local Sandy Hook School.

“We have a very tight interfaith community in Newtown,” said Praver who, when reached by phone Sunday morning, was preparing to participate in an interfaith gathering that evening to honor those killed. The event will be attended by President Barack Obama.

Praver said he has been in contact with clergy leaders from town and in surrounding areas, who are al lending each other support. “It’s not just this event,” said Praver. “We get together all the time for interfaith Thanksgivings, Passover Seders. We’ve known each other for years and like each other very much.”

He said the religious leaders were scheduled to meet at 3 p.m. on Sunday to coordinate their roles in the high-profile memorial service that evening.

Praver called the past few days, “the hardest days of our lives.” When reached by the Forward, he had just left a funeral home where he was with the parents of Noah Pozner, a 6-year-old who was one of 20 children killed on Friday and, so far, as known, the only member of the Jewish community to have been killed. Praver said viewing the body and making funeral arrangements for Monday was an important step in the closure process.

Praver said Adath Israel has made trained grief counselors and social workers available for any students or members of the community.