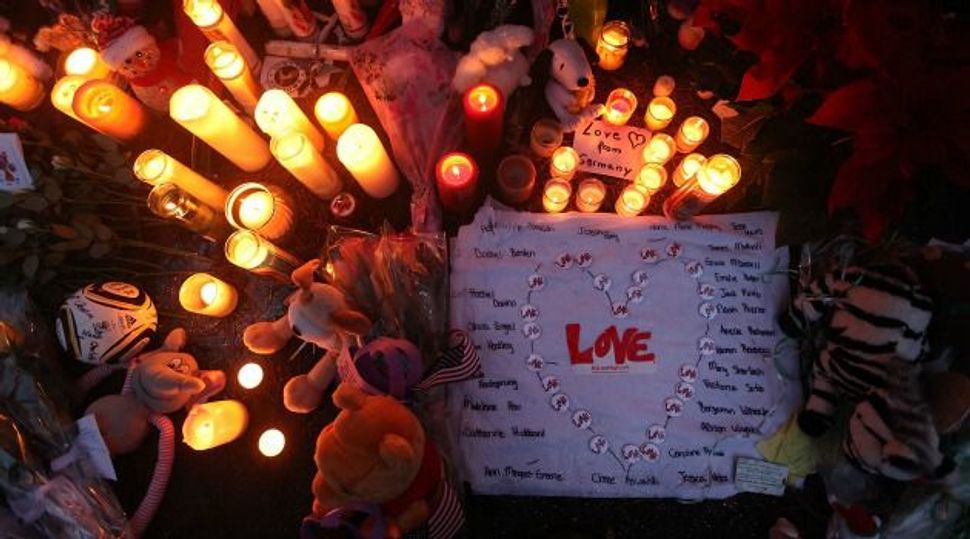 Back to School: A makeshift memorial to the victims of the shooting rampage at Newtown?s Sandy Hook Elementary School continued to grow. Image by getty images

The schools of Newtown, which stood empty in the wake of a shooting rampage that took 26 of their own, will again ring with the sounds of students and teachers on Tuesday as the bucolic Connecticut town struggles to return to normal.

But among the normal sounds of a school day – teachers reading to children, the scratch of pencil on paper – students will hear new ones, including the murmur of grief counselors and the footsteps of police officers.

Four days after 20-year-old Adam Lanza strode into Sandy Hook Elementary school and gunned down a score of 6- and 7-year-olds, in addition to six faculty and staff, that school will remain closed. It is an active crime scene, with police coming and going past a line of 26 Christmas trees that visitors have decorated with ornaments, stuffed animals and balloons in the school colors of green and white as a memorial to the victims.

The massacre – one of the deadliest school shootings in U.S. history – shocked Americans, prompting some lawmakers to call for tighter restrictions on guns and causing school administrators around the country to assess their safety protocols.

Newtown police plan to have officers at the six schools scheduled to reopen on Tuesday, trying to offer a sense of security to the students and faculty, many of whom spent the weekend in mourning. Newtown Police Lieutenant George Sinko acknowledged it may be difficult to ease the worries of the roughly 4,700 returning students and their families.

“Obviously, there’s going to be a lot of apprehension. We just had a horrific tragedy. We had babies sent to school that should be safe and they weren’t,” Sinko said. “You can’t help but think … if this could happen again.”

Newtown High School Principal Charles Dumais, in an e-mail to parents, said schools in the district would open two hours later than usual, with counselors available to students and their families.

“This is a day to start healing,” Dumais said.

While school officials have not yet decided when Sandy Hook students will resume their studies, the building that they will move into – the unused Chalk Hill School in the nearby town of Monroe – already showed signs of preparation.

On a fence opposite the building, a green sign with white lettering proclaimed “Welcome Sandy Hook Elementary!”

In Washington, the massacre prompted U.S. President Barack Obama on Monday to call a White House meeting with advisors to discuss ways to respond, a first step toward fulfilling the pledge he made a day earlier in Newtown. Th e administration’s plans to curb violence include but are not limited to gun-control measures, a spokesman said.

Police have warned it could take months for them to finish their investigation into the attack, which started when Adam Lanza killed his mother, Nancy, at home, before driving to the school armed with a Bushmaster AR 15 rifle and two handguns. After shooting 26 people at the school, he turned his gun on himself when he heard police approaching.

In total, 28 people died in the incident.

Many of the students and faculty of Sandy Hook and its neighbors will still have funerals to attend.

The first two victims, Noah Pozner and Jack Pinto, both 6, were buried on Monday, with the boys’ bodies laid out in white coffins. Jack was dressed in a New York Giants jersey with his favorite player’s number, while mourners left a teddy bear outside Noah’s service.

More funerals were expected on Tuesday, for victims including James Mattioli and Jessica Rekos. Each was 6 years old.

“It’s still not real that my little girl, who was so full of life and who wants a horse so badly and who’s going to get cowgirl boots for Christmas isn’t coming home,” Krista Rekos, Jessica’s mother, told ABC News on Monday.