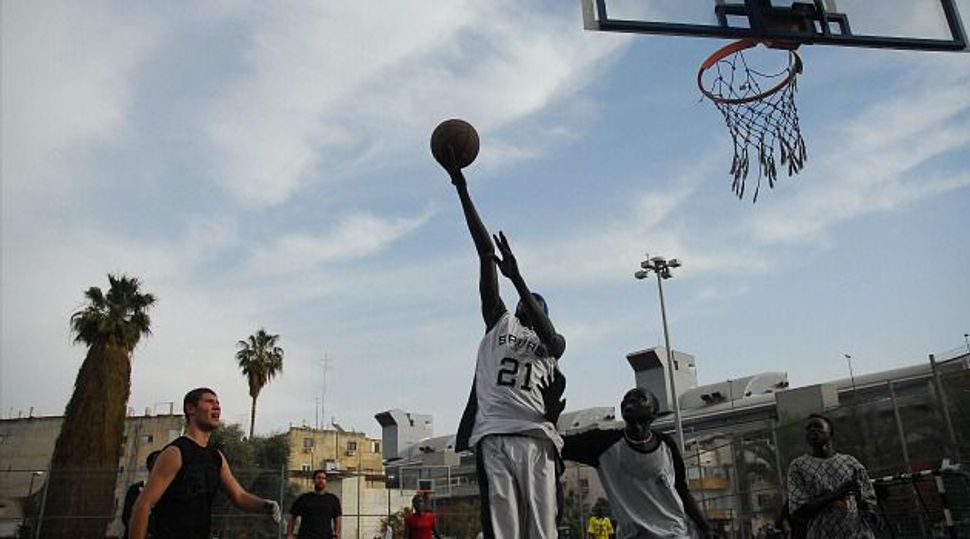 Hoop Dreams: Immigrants from Africa play hoops in Israel. A New Yorker made a court in Beersheba a reality as part of his bar mitzvah project. Image by getty images

A new basketball court built as part of a bar mitzvah project by a New York boy was dedicated in Beersheba.

The court was dedicated Sunday in the “Yud Alef” neighborhood of Beersheba, a neighborhood that is mainly home to immigrants from Ethiopia and the former Soviet Union. As part of the opening of the court, a friendly basketball game was held between neighborhood children and visiting children from New York.

Daniel Klosk of New York City donated all of his bar-mitzvah gifts toward the basketball project for kids his age in Israel, combining his love of basketball and Israel. In addition to the court, advanced basketball lessons will be given by a seasoned basketball coach twice a week to the neighborhood kids, for free, and new basketball team uniforms have already been purchased.

“I thought it’s important to give the kids in the neighborhood not only a new basketball court, but also the opportunity to enjoy the experience of learning and playing competitively on a real basketball team, with a real basketball coach, and to give them the same kind of opportunity that was given to me,” said Klosk. “I hope that this basketball training will give the kids the inspiration, ability, and motivation, to successfully overcome their daily challenges.”

Klosk plays on the New Renaissance Team of New York, a nationally ranked Division One team of the American Athletic Union

The project was undertaken as part of the “Give a Mitzvah–Do a Mitzvah” program of the UJA-Federation of New York.