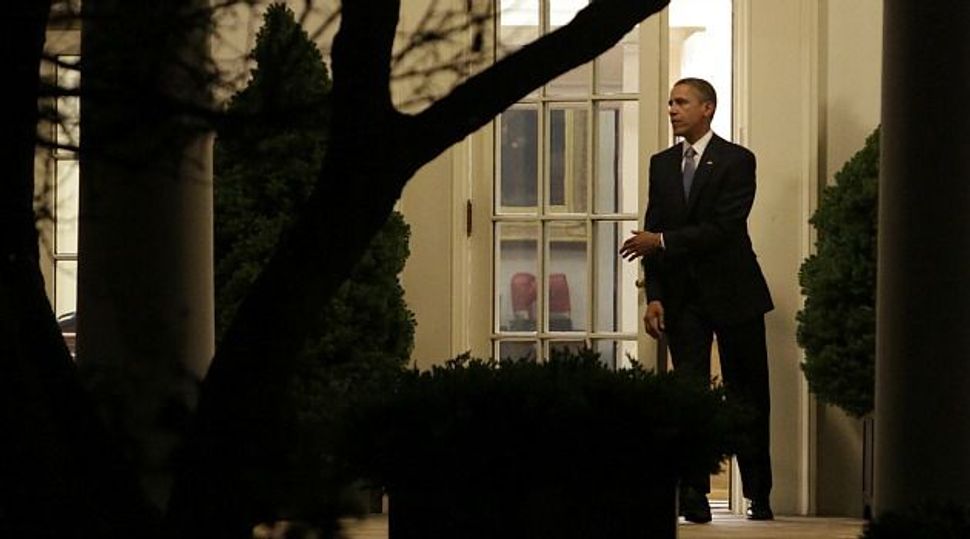 The United States averted economic calamity on Tuesday when lawmakers approved a deal to prevent huge tax hikes and spending cuts that would have pushed the world’s largest economy off a “fiscal cliff” and into recession.

The agreement hands a clear victory to President Barack Obama, who won re-election on a promise to address budget woes in part by raising taxes on the wealthiest Americans. His Republican antagonists were forced to vote against a core tenet of their anti-tax conservative faith.

The deal appeared in danger yesterday when Jewish Republican leader Eric Cantor declared he opposed the bill and many Republicans seeemed ready to tack on deal-busting amendments. That plan collapsed when the House GOP realized it didn’t have support from its own membership to pass it.

The deal also resolves, for now, the question of whether Washington can overcome deep ideological differences to avoid harming an economy that is only now beginning to pick up steam after the deepest recession in 80 years.

Consumers, businesses and financial markets have been rattled by the months of budget brinkmanship. The crisis ended when dozens of Republicans in the House of Representatives buckled and backed tax hikes approved by the Democratic-controlled Senate.

Asian stocks hit a five-month high and the dollar fell as markets welcomed the news. China’s state news agency Xinhua took a more severe view, warning the United States must get to grips with a budget deficit that threatened not a “fiscal cliff” but a “fiscal abyss”. Most of China’s $3.3 trillion foreign exchange reserves are held in dollars.

The vote averted immediate pain like tax hikes for almost all U.S. households, but did nothing to resolve other political showdowns on the budget that loom in coming months. Spending cuts of $109 billion in military and domestic programs were only delayed for two months.

There was plenty of drama on the first day of 2013 as lawmakers scrambled to avert the “fiscal cliff” of across-the-board tax hikes and spending cuts that would have punched a $600 billion hole in the economy this year.

As the rest of the country celebrated New Year’s Day with parties and college football games, the Senate stayed up past 2 a.m. on Tuesday and passed the bill by an overwhelming margin of 89 to 8.

When they arrived at the Capitol at noon, House Republicans were forced to decide whether to accept a $620 billion tax hike over 10 years on the wealthiest or shoulder the blame for letting the country slip into budget chaos.

The Republicans mounted an effort to add hundreds of billions of dollars in spending cuts to the package and spark a confrontation with the Senate.

For a few hours, it looked like Washington would send the country over the fiscal cliff after all, until Republican leaders determined that they did not have the votes for spending cuts.

In the end, they reluctantly approved the Senate bill by a bipartisan vote of 257 to 167 and sent it on to Obama to sign into law.

“We are ensuring that taxes aren’t increased on 99 percent of our fellow Americans,” said Republican Representative David Dreier of California.

The vote underlined the precarious position of House Speaker John Boehner, who will ask his Republicans to re-elect him speaker on Thursday when a new Congress is sworn in. Boehner backed the bill but most House Republicans, including his top lieutenants, voted against it.

The speaker had sought to negotiate a “grand bargain” with Obama to overhaul the U.S. tax code and rein in health and retirement programs that are due to balloon in coming decades as the population ages. But Boehner could not unite his members behind an alternative to Obama’s tax measures.

Income tax rates will now rise on families earning more than $450,000 per year and the amount of deductions they can take to lower their tax bill will be limited.

Low temporary rates that have been in place for the past decade will be made permanent for less-affluent taxpayers, along with a range of targeted tax breaks put in place to fight the 2009 economic downturn.

However, workers will see up to $2,000 more taken out of their paychecks annually with the expiration of a temporary payroll tax cut.

The non-partisan Congressional Budget Office said the bill will increase budget deficits by nearly $4 trillion over the coming 10 years, compared to the budget savings that would occur if the extreme measures of the cliff were to kick in.

But the measure will actually save $650 billion during that time period when measured against the tax and spending policies that were in effect on Monday, according to the Committee for a Responsible Federal Budget, an independent group that has pushed for more aggressive deficit savings.