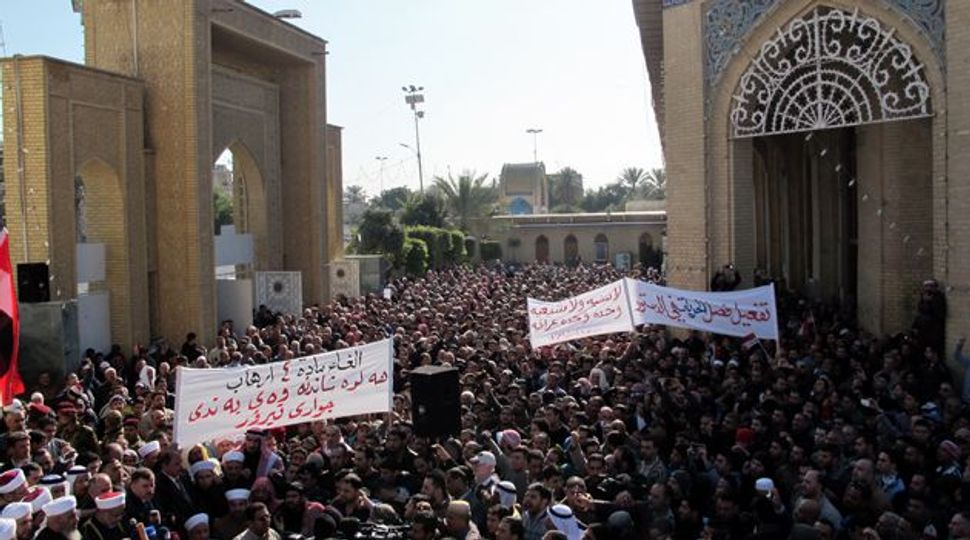 Thousands of Sunni Muslim protestors hold banners and wave their national flag during a demonstration on January 4, 2013 criticising Iraq?s premier and demanding the release of prisoners they say are wronglfully held, near Abu Hanifa mosque, in the mostly Sunni Muslim neighbourhood of Aldhamiya in Baghdad. Image by getty images

Over the past two weeks, tens of thousands of Sunnis have staged demonstrations, and in Anbar province they have blocked a highway to Syria in a show of anger against Maliki, whom they accuse of marginalising their community and monopolising power.

The discontent is real, but the protests are driven by Sunni Islamist parties bent on carving out an autonomous region akin to the Kurdish one in the north, Kurdish and Sunni sources say.

They say the Sunni Islamists scent an opportunity to escape what they see as Shi’ite domination, counting on a victory by Sunni rebels trying to topple Syrian President Bashar al-Assad, whose Alawite minority has its roots in Shi’ite Islam.

Assad’s eventual demise would weaken the sway of Shi’ite Iran, Syria’s main regional ally and an influential player in Iraqi politics. Sunni states such as Saudi Arabia, Qatar and Turkey have backed the Syrian leader’s adversaries.

Heartened by a possible shift in the Sunni-Shi’ite balance of power in the Middle East, Iraq’s Sunnis are giving vent to the frustrations they have endured since the U.S.-led invasion overthrew Saddam Hussein and empowered majority Shi’ites.

Some waving Saddam-era Iraqi flags, protesters have echoed the chants of Arab uprisings that have brought down leaders in Libya, Egypt, Tunisia and Yemen in the past two years.

“We will never relent. Enough of Sunnis living in Iraq like outsiders. This time it’s do or die for us,” said Jamal Adham, a tribal leader from Saddam’s former hometown of Tikrit.

Senior Sunni sources say the Iraqi Islamic Party (IIP), part of the Muslim Brotherhood, is the prime mover in a campaign to create an autonomous Sunni fiefdom, by force if need be.

“Sunnism is our slogan and a region is our goal,” senior cleric Sheikh Taha Hamed al-Dulaimi told demonstrators in Anbar in a video on his website. “Do not scatter your demands.”

The IIP exerts influence through mosques and clerics in Sunni strongholds such as Anbar province, which was almost completely controlled by al Qaeda at the height of Iraq’s insurgency in 2005-07 and shares a porous border with Syria.

Militants linked to al Qaeda appear to be regrouping in the caves and valleys of Anbar, and some are crossing the border to join Syrian rebels fighting to topple Assad’s police state.

The tribes of Anbar were instrumental in subduing al Qaeda in 2007, making common cause with U.S. troops to fight fellow Sunnis in what came to be known as the “Anbar Awakening”.

Now, Anbar is awakening again, but this time the target is Maliki – and U.S. forces who once held the ring are long gone.

“Anbar has always had the power to be very influential in Iraqi politics,” said Gareth Stansfield, an Iraq expert at Exeter University. “This should be of great concern to Maliki.”

Iraqi authorities said the bodyguards had confessed to involvement in assassinations carried out in coordination with security men employed by Sunni Vice President Tareq al-Hashemi.

Hashemi fled into exile a year ago and was later sentenced to death in absentia for terrorism. Esawi himself was once a leader of an armed Islamist group, Hamas al-Iraq, in Anbar.

The arrests and alleged confessions of bodyguards of the two senior Sunni leaders followed a strikingly similar pattern, but this time round, Maliki is more isolated, analysts say.

One Shi’ite lawmaker said Maliki had planned to target Esawi for some time and had calculated that it would be easier to strike now and contain the Sunni backlash than to do it later when Sunnis might be emboldened by events in Syria.

“Maliki told me he would go after Esawi and his bodyguards more than a month ago,” said the parliamentarian on condition of anonymity. “He preferred to burst the Sunni bubble, rather than wait for it to blow up in his face”.

So far, Maliki’s response has been cautious.

This week he said his patience was wearing thin and warned he would not tolerate the Sunni rallies indefinitely, but made a small concession by releasing 11 women detainees and allowing others to complete their sentences in their home provinces.

That will not appease all the protesters.

The provincial council of the predominantly Sunni Salahuddin governorate on Thursday re-submitted a request to the electoral commission to form their own region. Other Sunni-majority provinces have previously presented similar demands.

Under the constitution drawn up after the U.S.-led invasion, each province or group of provinces is entitled to create a federal region if it wins enough votes in a referendum.

“This is the moment when we see whether Maliki has emerged as the strongman of Iraq,” Stansfield said. “Either he enforces a centralised government on Iraq or allows federalism to be the organising principle of governance across the country.

“The question is whether it’s done after fighting or instead of fighting.”

The central government in Baghdad is already at odds with the Kurdish region. Their long-running feud over land and oil rights recently escalated into a military build-up in the oil-rich territory along their contested internal boundary.

The Kurds and other rivals of Maliki are likely to use the Sunni protests to pile pressure on the Shi’ite leader without necessarily jumping on board, analysts and politicians say.

Both Kurdish President Masoud Barzani and influential Shi’ite cleric Moqtada al-Sadr have voiced support for the protesters in Anbar and elsewhere, as long as they drop sectarian slogans and stop glorifying Saddam’s Baath party.

Sunnis are united against Maliki, but many are wary of hardliners who they fear might revive the kind of inter-communal conflict that previously drove Iraq to the brink of civil war.

Sheikh Hameed Turki al-Shook, a senior Sunni tribesman in Anbar, said: “The demand to create the regions is not ours and those working to spread these ideas do not represent us.”