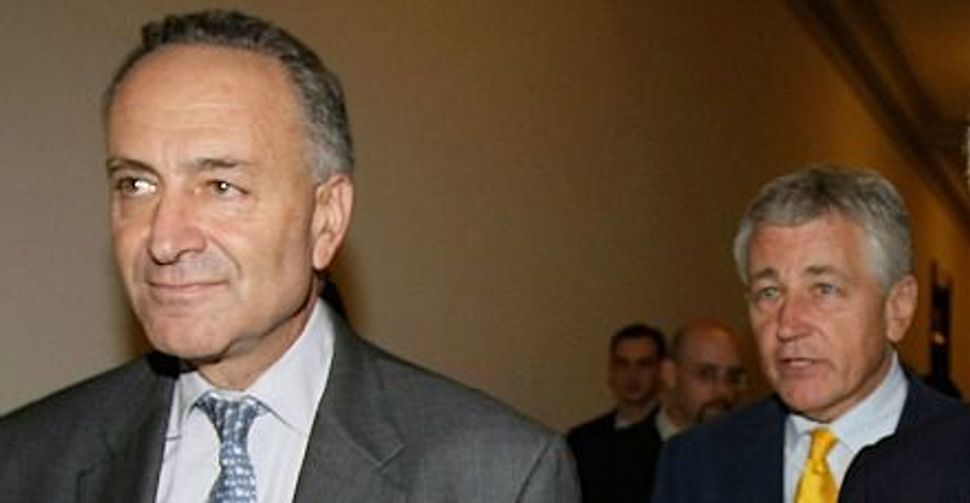 One of Chuck Hagel’s greatest potential obstacles on his path to approval as defense secretary has now been removed. 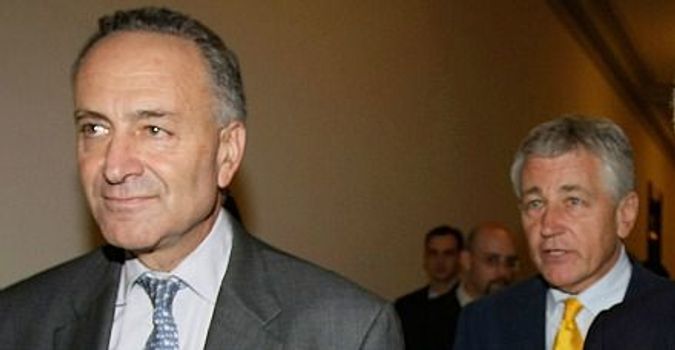 Chuck Schumer, the New York Democrat who made it known he had deep concerns over Hagel’s views on Israel and the Middle East, is now fully on board with the nomination. Schumer’s change of heart came after a 90-minute one-on-one meeting with Hagel Monday. Schumer’s position on Hagel was seen as pivotal, because of his standing in Senate and within the Jewish community.

In a statement issued Tuesday morning, Schumer made clear he got all the clarifications he needed from Hagel. “Based on several key assurances provided by Senator Hagel, I am currently prepared to vote for his confirmation. I encourage my Senate colleagues who have shared my previous concerns to also support him,” Schumer’s statement read.

According to the New York senator, Hagel addressed in the meeting all the points of contention which have been highlighted by some in the pro-Israel community ever since the nomination was announced. He made clear he rejects a strategy of containment for Iran’s nuclear program and believes that dealing with Iran should be a top priority, using all means to stop Tehran from obtaining nuclear capabilities, including military force.

Hagel also expressed support for all of the administration sanction measures against Iran, including further unilateral sanctions if necessary. While in the Senate, Hagel voted against some of the sanction resolutions explaining he did not believe unilateral moves would be effective.

Hagel also clarified that he does not support any negotiations with Hamas or Hezbollah until they give up terror and recognize Israel’s right to exist. The conversation also touched on Hagel’s controversial remarks about the “Jewish lobby.” Hagel, according to Schumer’s statement, expressed his regret for using the term.

“I know some will question whether Senator Hagel’s assurances are merely attempts to quiet critics as he seeks confirmation to this critical post. But I don’t think so,” Schumer concluded. “Senator Hagel realizes the situation in the Middle East has changed, with Israel in a dramatically more endangered position than it was even five years ago. His views are genuine, and reflect this new reality.”

Hagel’s pre-confirmation campaign also won over another Jewish senator, Barbara Boxer from California, who announced Monday she supports the nomination, following a phone conversation she had with Hagel. Boxer said she also received written response from Hagel regarding concerns she raised about his views on Israel and on LGBT issues.

The four-term California senator had held off backing the Hagel, but said Hagel would have her vote after they had a long conversation and after he wrote her a letter spelling out his positions on Iran, Israel, and the treatment of gays and women in the military.

“We spoke for quite a while last week and I was very pleased with that conversation,” Boxer told reporters on a conference call from California. She said she had not been aware of Schumer’s announcement and that the two had made their decisions independently.

Other key Jewish senators, including Carl Levin who chairs the Armed Services committee and Dianne Feinstein, chairwoman of the Intelligence Committee, have already endorsed Hagel.

Hagel is expected to garner votes from all 53 Senate Democrats and between 10 and 15 Republicans, according to one observer who has been counting votes.