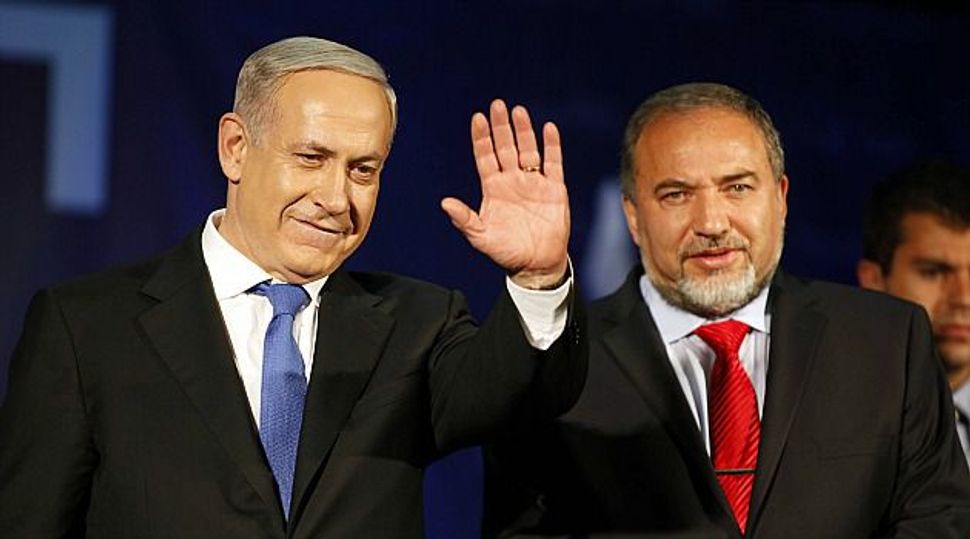 Israeli leader Benjamin Netanyahu narrowly won an election in which disgruntled voters catapulted a new centrist challenger into second place and he now faces the daunting task of building a coalition.

The right-wing prime minister claimed victory after his Likud party and its ultranationalist Yisrael Beitenu ally took 31 of parliament’s 120 seats, according to a near-final tally.

That made it the biggest single bloc, despite losing 11 of its previous seats. Overall, right-wing and religious parties emerged with roughly half the total, an erosion of the dominance Netanyahu had enjoyed during almost four years of deadlock in peacemaking with the Palestinians and jitters over Iran.

“A blow for Netanyahu,” was the headline in the biggest-selling daily Yedioth Ahronoth on Wednesday, echoing other Israeli media homing in on the surprise surge of the Yesh Atid (There is a Future) party, runner-up with 19 projected seats.

Yesh Atid and the centre-left Labour party, which came third with 15 seats, tapped into secular middle-class resentment that tax-payers must shoulder what they see as the burden of welfare-dependent ultra-Orthodox Jews exempt from military conscription.

Netanyahu, who in two terms as premier has enjoyed core religious backing, quickly made overtures to his opponents by saying he wanted to form as broad a coalition as possible, a process that is likely to take several weeks.

A senior member of Yesh Atid, led by former television presenter Yair Lapid, said the issue of ending exemption from military service was central to the party’s platform, as was reviving peace talks with the Palestinians.

“Whoever wants Yesh Atid in the coalition will need to bring these things,” Ofer Shelah told Army Radio.

Palestinians reacted warily to the outcome of the poll, voicing doubts it would produce a government more willing to compromise for peace, even if it included centrist parties.

An editorial in the Ramallah-based Al-Quds daily said such parties would provide a “cosmetic decoration” for a Netanyahu-led government that would mislead world public opinion without halting a drive to expand Jewish settlement on occupied land.

“We’re not seeking to make peace with this or that party in Israel,” said Palestinian negotiator Saeb Erekat, adding that peace required creation of a Palestinian state to live alongside Israel based on the lines that existed before the 1967 war.

Netanyahu, with his scarcely veiled threats of military action against Iran and his tough approach to the Palestinians, has had a fractious relationship with U.S. President Barack Obama, who himself embarked on a new term this week.

Iran denies it is planning to build an atomic bomb, and says Israel, widely believed to have the only nuclear arsenal in the Middle East, is the biggest threat to the region.

Netanyahu views Tehran’s nuclear programme as a threat to Israel’s existence and has stoked international concern by hinting at possible Israeli military action to thwart it.

He has shunted Palestinian peacemaking well down the agenda despite Western concern to keep the quest for a solution alive.

Now weakened by the verdict of voters, he is almost certain to need centrist partners for a stable coalition and may perhaps offer more flexibility toward the Palestinians, although few expect any breakthrough in the coming months.

Israeli shares traded higher after the election, with the blue-chip Tel Aviv index up 1.5 percent at 1030 GMT, while the shekel held steady against the dollar, showing markets were unfazed by fears of prolonged coalition talks.

He even mooted an unlikely “dream government” in which Likud would forge a strong coalition with leftist and centrist parties, excluding far-right and religious factions.

He urged Netanyahu “to build as broad a government as possible so that we can bring about real change in Israel”.

Bennett, who advocates annexing West Bank land to Israel, told cheering supporters: “There is only one truth and it is simple. The land of Israel belongs to the people of Israel.”

Aaron David Miller, once a senior U.S. adviser on Israeli-Palestinian peacemaking, said a weakening of the right might improve Netanyahu’s relations with Obama.

“The fact is, if (Netanyahu) goes with Lapid and he reaches out to the centre, you’re going to end up with an American-Israeli rapprochement to a certain degree,” Miller told CNN.

Tuesday’s vote was the first in Israel since Arab uprisings swept the region two years ago, reshaping the Middle East.

Netanyahu has said the turbulence, which has brought Islamists to power in neighbouring Egypt and elsewhere, shows the importance of strengthening national security.

Foreign policy issues barely registered during the election campaign. The next government, which is unlikely to take power for weeks, will have to tackle the stuttering economy and a budget deficit that presages spending cuts and tax hikes.