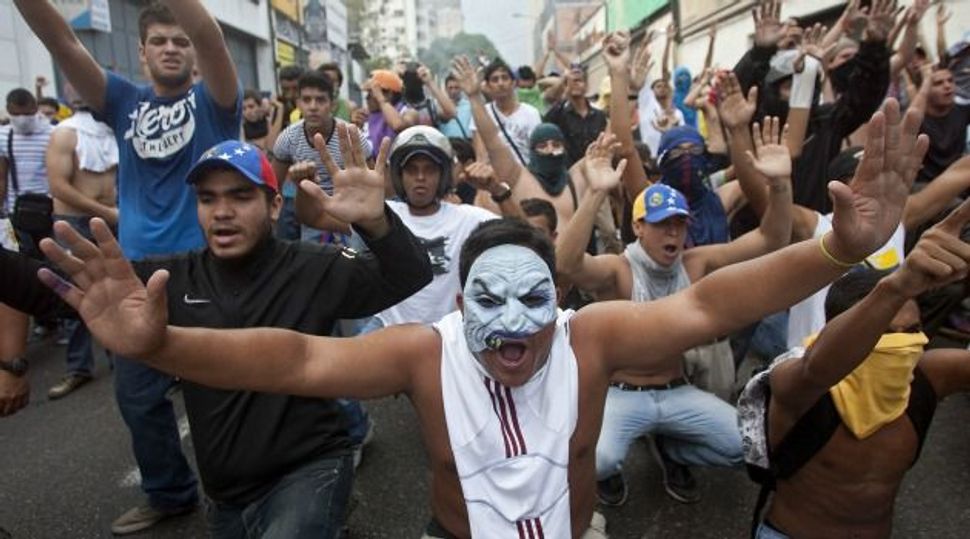 Both sides in Venezuela’s political stand-off will hold rival demonstrations on Tuesday after authorities rejected opposition demands for a presidential election recount and protesters clashed with police in Caracas.

The National Electoral Council has refused to hold a recount of the votes, and police fired tear gas and rubber bullets on Monday to disperse opposition supporters who protested in a wealthy district of Caracas.

The election was triggered by the death of socialist leader Hugo Chavez last month after a two-year battle with cancer.

He named Maduro as his successor before he died and his protege narrowly won the election with 50.8 percent of the vote to Capriles’ 49.0 percent.

Both sides have called for their supporters to hold peaceful demonstrations nationwide on Tuesday, raising fears of more political unrest in the OPEC nation of 29 million people.

“I call for the people to fight peacefully, to mobilize in all the country … enough abuses!” Maduro told reporters on Monday, hours after formally being declared the winner. “They’re trying to violate the majority … we call on them (the opposition) to respect the people’s will.”

As well as the clashes in Caracas, which included demonstrations outside the offices of state television channel VTV and the home of the head of the election authority, opposition protests were reported in several provincial cities.

Capriles, the governor of Miranda state, hopes to highlight the weakness of Maduro’s mandate and stir up opposition anger over his charge that the electoral council is biased in favor of the ruling Socialist Party.

But the strategy could backfire if demonstrations turn into prolonged disturbances, such as those the opposition led between 2002 and 2004 that in some instances involved blocking roads for days with trash and burning tires.

A return to prolonged trouble in the streets could renew questions about the opposition’s democratic credentials on the heels of their best showing in a presidential election, and just as Capriles has consolidated himself as its leader.

Mexico’s leftist presidential candidate Andres Manuel Lopez Obrador called for protests after losing a 2006 election by a razor-thin margin, alienating even some of the voters who had backed him.

But Capriles says he will fight on.

“We are not going to ignore the will of the people. We believe we won … we want this problem resolved peacefully,” Capriles told a news conference. “There is no majority here, there are two halves.”

Opposition sources say their count showed Capriles won by more than 300,000 votes. His team says it has evidence of some 3,200 election day irregularities, from allegations of voters using fake IDs to intimidation of volunteers at polling centers.

The focus of Monday’s protests in the capital was the Plaza Altamira, which was often site of opposition demonstrations during Chavez’s polarizing 14-year rule.

“This was a complete fraud,” said Carlos Cusumano, a 20-year-old student among a group of young protesters near the plaza, many of whom wore T-shirts wrapped around their faces. “We will protest for as long as it takes. We will not give up the streets.”

Some demonstrators threw sticks and stones at the ranks of police, who wore body armor and carried shields.

Maduro, who had initially said he was open to a recount, called on his supporters to demonstrate all week. The official results showed him winning by 265,000 votes.

He is due to be sworn in on Friday, likely leaving Capriles’ call for protests as more a symbolic show of defiance.

The head of the electoral authority, Tibisay Lucena, shot down the opposition leader’s call for a recount, saying “threats and intimidation” were not the way to appeal its decisions.

She also accused the U.S. government and Organization of American States of trying to meddle in Venezuelan affairs after they backed the idea of a vote audit.

The controversy over Venezuela’s first presidential election without Chavez on the ballot in two decades raised doubts about the future of “Chavismo” – the late president’s self-proclaimed socialist movement – without its towering and mercurial founder.

Chavez named Maduro as his heir in an emotional last public speech to the nation before his death, giving the former foreign minister and vice president a huge boost ahead of the vote.

But Maduro’s double-digit lead in opinion polls evaporated in the final days as Capriles led an energetic campaign that mocked Maduro as a non-entity and focused voters on daily problems ranging from crime to inflation and creaking utilities.

Maduro says comparisons between him and his former boss are unfair. He eulogized Chavez at every turn during the campaign, repeatedly describing himself as his “son”, but failed to emulate his folksy, man-of-the-people charm.

Maduro’s margin of victory raises the possibility he could face future challenges from rivals within the disparate leftist coalition that united around Chavez, who won four presidential elections.

At his last election in October, the former soldier beat Capriles by 11 percentage points even though his battle with cancer had severely restricted his ability to campaign.