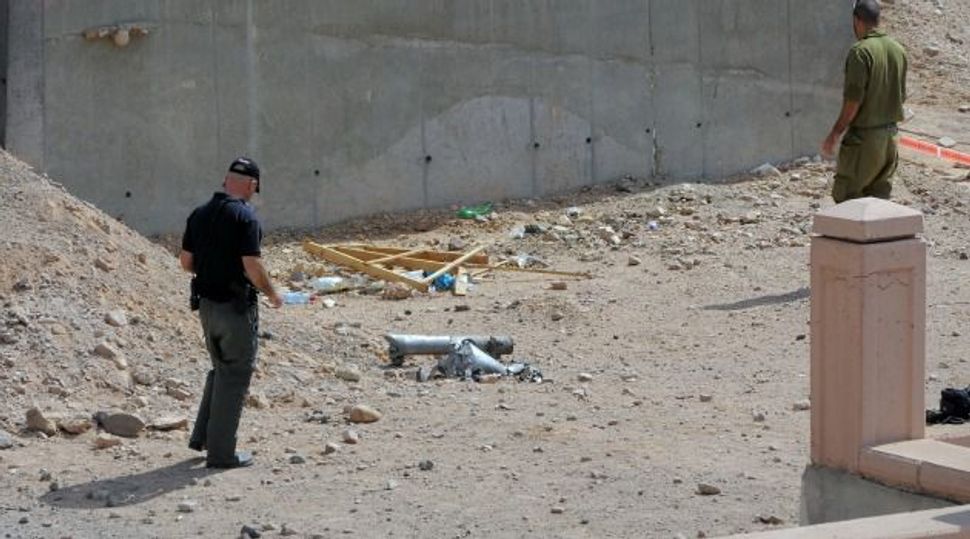 The incident was likely to fuel Israeli concerns about lawlessness in neighbouring Sinai, where militant groups have stepped up their activities since Egyptian President Hosni Mubarak’s downfall in 2011.

An Israeli military spokeswoman said two rockets were launched from Sinai and that both hit open areas.

In a statement posted on its website, the Islamist militant group Magles Shoura al-Mujahddin said it had targeted Eilat with two Grad missiles and then withdrew safely. Egyptian security sources said the rockets had probably been fired from Sinai.

The group shares the same ideology as al Qaeda and its recruits include Egyptians and Palestinians. It said it was retaliating for what it described as Israel’s attack on protesters demonstrating over a Palestinian prisoner’s death.

Two weeks ago, Israeli troops shot dead a Palestinian youth in the occupied West Bank during confrontations with protesters angered by the death in prison from cancer of 64-year-old Maysara Abu Hamdeya. Palestinian officials said he had been denied timely medical care. Israel denied any negligence.

Speaking on Israel Radio before the claim of responsibility, Amos Gilad, a senior Israeli defence official, said: “There are terror groups seeking to complicate Israel’s relations with Egypt by murdering Israelis and disrupting life.”

Such groups, Gilad said, “aim to destroy and drown in blood everything possible, and we have to deal with them”.

But he made no suggestion of any Israeli military action in Sinai, a move that would violate a 1979 peace treaty with Egypt, and praised what he called a “continuous and deep dialogue” with Egyptian officials on security issues.

“They have no sympathy for terror,” Gilad said about authorities in Egypt, now led by a president from the Muslim Brotherhood, a group Israel has viewed with suspicion.

Israel deployed an Iron Dome anti-rocket battery in Eilat some two weeks ago, a period coinciding with the Jewish Passover holiday when the city at the tip of Gulf of Aqaba is packed with vacationers.

But on Wednesday, the system did not intercept the incoming missiles “for operational reasons”, the spokeswoman said, without elaborating. The attack was carried out a day after Israel celebrated its 65th anniversary.