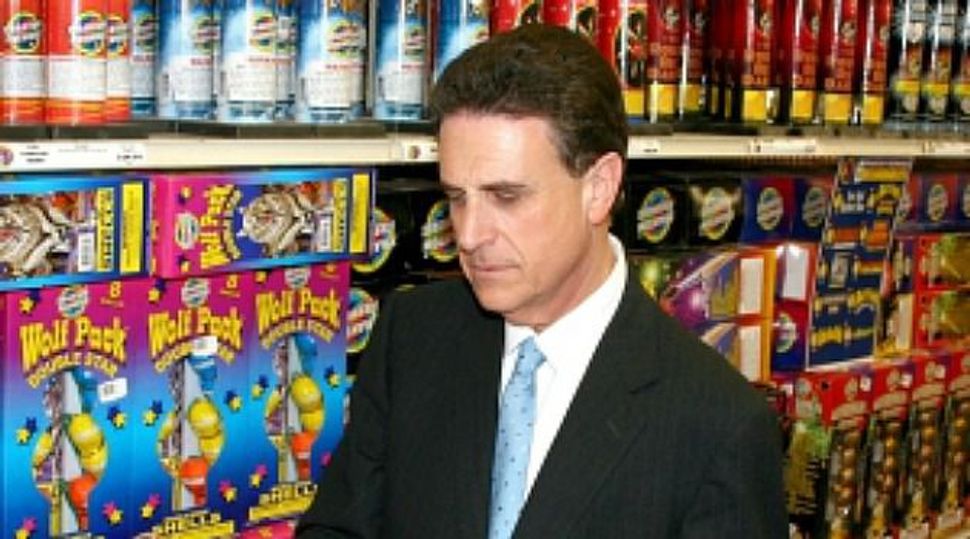 Bruce Zoldan, owner of B.J. Alan Co, is under fire because the Boston terror bomber bought his fireworks. Did they use them in the attack? Image by jta

The B.J. Alan Company is the second largest importer and wholesaler of consumer fireworks in the United States. It’s also owned by Bruce Zoldan, who is Jewish.

Now Zoldan finds himself embroiled in the Boston Marathon investigation because his company sold Tamerlan Tsarnaev fireworks possibly used in the homemade bombs.

Zoldan insists that the powder in the fireworks could not have been enough to create the bombs. Yet, he is uncertain if materials from the fireworks were used at all in the bombs.

“We doubt that the product, itself, was used in the homemade-bomb devices,” Zoldan told Vindy.com. “We’re not 100 percent sure of that. We’re working closely with the FBI, and we’ll get an analysis of what material was used in the bomb-making.”

This isn’t Zoldan’s first brush with the FBI in this regard. Zoldan previously found himself defending the sale of his fireworks when Faisal Shahzad, who attempted to explode a parked SUV on May 1, 2010 in New York’s Times Square, bought some Phantom firecrackers for inclusion in the device, which did not explode.

“We obviously need to band together to do everything we can to stop this,” Zoldan said in the recent interview. “The fireworks industry,” he added, “will do what it can to minimize this” in the future.

The consumer-grade firecrackers that were used in the car bomb were purchased from a B.J. Alan distributor in Pennsylvania.

“The M88 he used wouldn’t damage a watermelon,” Zoldan was quoted as saying in an Associated Press story. “Thank goodness he used that.”

Using video from the store, the company was able to help the FBI identify the suspect, according to one of B.J. Alan’s vice presidents, Bill Weimer.

“Bruce and I were talking about it recently,” Weimer told JTA. “Here we are, trying to help celebrate freedom, and idiots like this were trying to use the products to do harm.”

The company, based in Youngstown, Ohio, imports and markets cleverly packaged fireworks that spark, boom or whistle under its two main trade names, Phantom and Wolf Pack. And it turns out there is a very Jewish tint to the “the rocket’s red glare” – namely all five of the company’s principals: Zoldan and his wife, Rori, an Israeli who runs the advertising and public relations; his brother Alan and first cousin Jerry Bostocky, who both serve as vice presidents, and Weimer.

“I’m the only one who is not part of the family,” Weimer says.

Established in 1977 by Bruce Zoldan, the company has retail stores and showrooms in 13 states, and up to 1,250 additional seasonal sales outlets in 17 others.

Phantom sells aerials, rockets and missiles with names like Flying Aerial Circus and Shagadellic Mojo Blue, and fountains and cones with names like Moondance, described in catalogue prose as emitting “purple pearls and glittering crackling chrysanthemums.”

Additionally they sell wheels, firecrackers and sparklers – everything you might need to light up a Fourth of July night.

The company also owns Diamond Sparkler, which according to Weimer is “the last continually producing sparkler factory left in the U.S.” On the company website, Zoldan says that “I just can’t envision something as American as sparklers, with its association with the 4th of July, not being made in this country.”