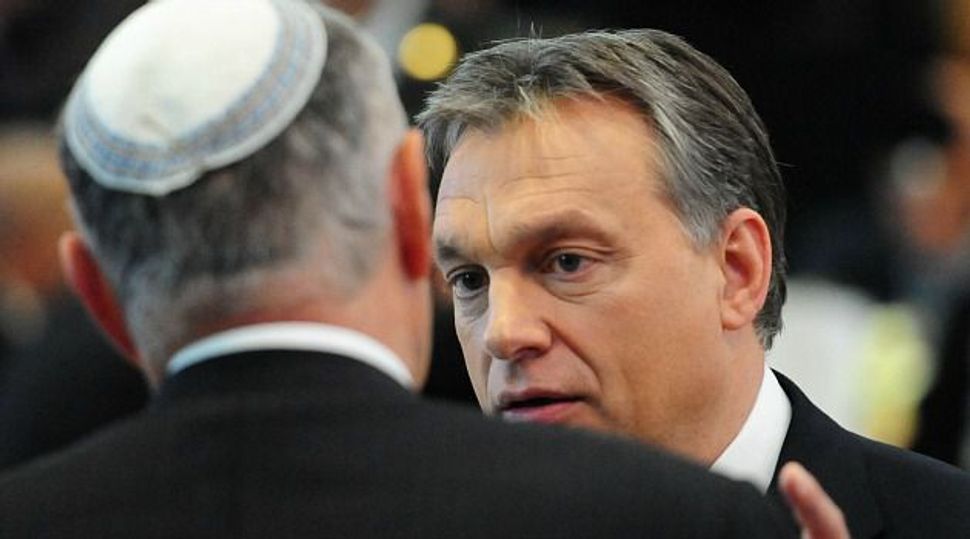 Prime Minister Viktor Orban strongly denounced growing anti-Semitism in Hungary on Sunday but stopped short of censuring the far-right Jobbik party his audience of world Jewish leaders most wanted him to scold.

Orban told the World Jewish Congress (WJC), which is holding its four-yearly assembly in Hungary to highlight its concern about rising hostility to Jews here and elsewhere in Europe, that anti-Semitism was “unacceptable and intolerable”.

He recounted the steps his conservative government has taken to outlaw hate crimes and preserve the memory of the Holocaust, during which about half a million Hungarian Jews died.

But he did not respond to a call from WJC President Ronald Lauder, who in his opening remarks singled out Jobbik and told Orban “Hungarian Jews need you to take on these dark forces”.

Lauder said, “we see the outrage of anti-Semitism. This is by no means only in Hungary, but also in other places in Europe – in Greece, in Ukraine and elsewhere.”

After Orban’s speech, a WJC statement said: “The prime minister did not confront the true nature of the problem: the threat posed by the anti-Semites in general and by the extreme-right Jobbik party in particular.

“We regret that Mr. Orban did not address any recent anti-Semitic or racist incidents in the country, nor did he provide sufficient reassurance that a clear line has been drawn between his government and the far-right fringe.”

Jobbik, which also vilifies Hungary’s Roma minority and opposes the European Union and what it sees as other foreign influences, has 43 of the 386 seats in parliament, where Orban’s Fidesz party has more than two-thirds of the seats.

One of Jobbik’s deputies called in November for lists of prominent Jews to be drawn up to protect national security.

At a Jobbik rally on Saturday, he and other deputies charged that Jews were trying to buy up property to take over Hungary and accused Israel of running concentration camps in Gaza.

Addressing the Jewish leaders, Orban said: “We don’t want Hungary to become a country of hate and anti-Semitism and we ask for your help and experience in helping us solve the problem.”

He said Hungary’s answer to increasing anti-Semitism here and elsewhere in Europe “is not to give up our religious and moral roots but to recall and reinforce the example of good Christians” in its laws defending the dignity of all citizens.

While the government has taken steps against anti-Semitism, critics say it does not draw a clear enough line against Jobbik, which competes with it for votes of nationalist Hungarians frustrated by the deepening economic crisis.

Elie Petit, a French Jewish student leader attending the assembly, said Orban “does not fight really anti-Semitism, racism and attacks on minorities. He is not strong enough to alter the actions of the Jobbik party.”

Jobbik is also popular among young Hungarians, especially university students in the liberal arts, sociologist Peter Tibor Nagy told Reuters. “That means it is not just a temporary phenomenon, it will last,” he said.

Formed in 2003, Jobbik gained increasing influence as it gradually radicalised, vilifying Jews and the country’s 700,000 Roma. Hungary has been among European states worst hit by the economic crisis and has struggled to exit recession.

Peter Feldmajer, head of the Hungarian Jewish community, hinted at the government’s ambiguous stand in his speech when he said texts by “Hungarian Nazis are included in the national curriculum and thus polluting the souls of our students”.

Hungary was once a centre of Jewish life in Europe and a quarter of Budapest’s pre-Holocaust population was Jewish.

The country now has about 80,000-100,000 Jews and has seen a modest revival of Jewish life with renovated synagogues and new schools. New restaurants and bars have made the old ghetto area into one of the city’s most popular night spots.