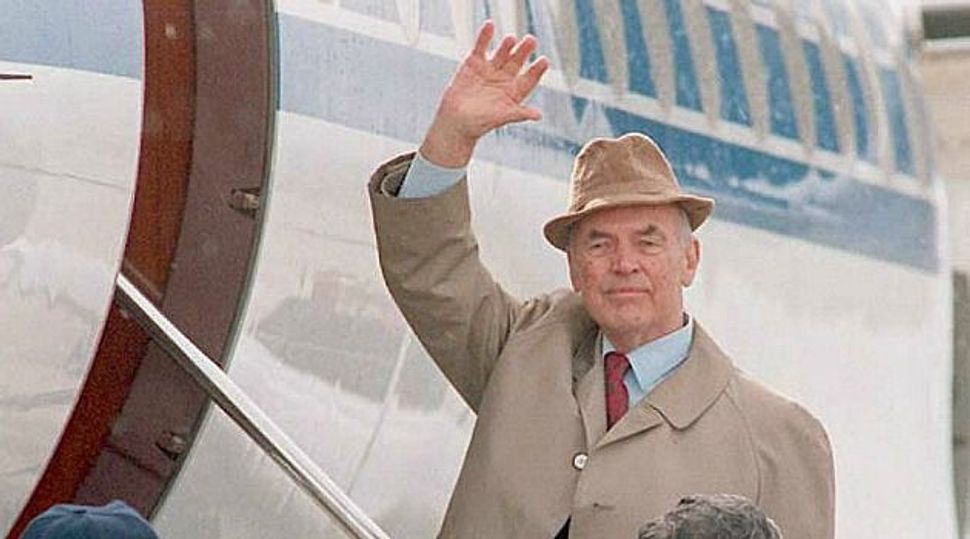 End of Exile: Nazi guard Erich Priebke waves to supporters as he left exile in Argentina for trial in Italy. Image by getty images

Italian tax collectors have ordered the president of Rome’s Jewish community and a TV reporter to pay the court fees of convicted Nazi war criminal Erich Priebke, who lost a lawsuit against them in 1996.

“I won’t pay,” Jewish Community President Riccardo Pacifici told Italian media. Under Italian law, “all parties involved” must pay the fees to register the sentence if the guilty party is judged to have no assets.

Pacifici and TV reporter Walter Vecellio recently received a bill from the state tax collection agency for about $345, according to reports.

Priebke, 99, a former SS captain, is serving a life sentence under house arrest for his role in the 1944 massacre of 335 Romans, including about 75 Jews, in the Ardeatine Caves south of Rome.

His suit against Pacifici and Vecellio stemmed from the clashes that erupted after his initial trial in 1996, the year after he was tracked down in Argentina and extradited to Italy. A Rome military court found him guilty but freed him because of extenuating circumstances.

Scores of protesters, many of them militant young Jews, battled with police and tried to storm the courthouse. After eight hours, Italy’s justice minister ordered Priebke rearrested. He was retried in 1998 and sentenced to life in prison.