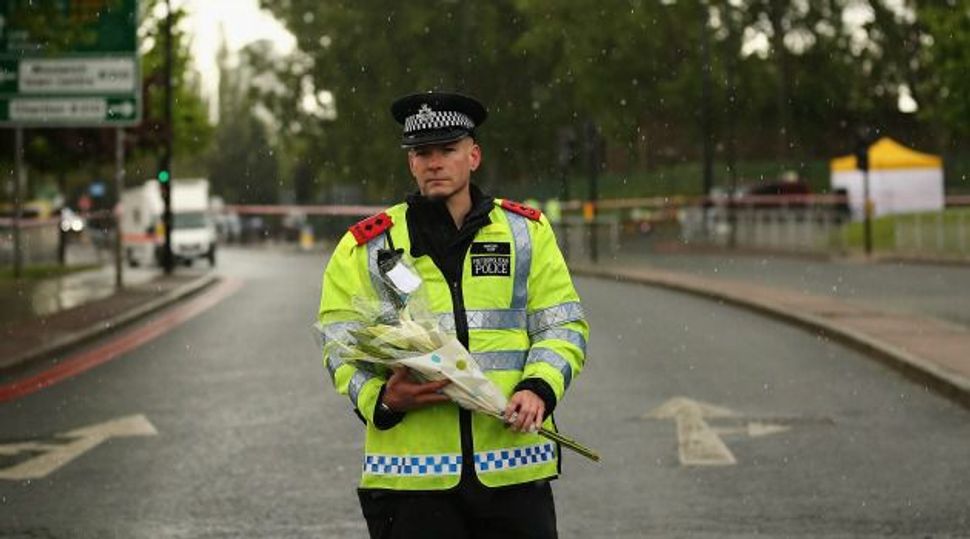 Flowers and Hate: A London policeman stands guard during a hail storm near the scene of the deadly meat cleaver attack on a soldier by a self-proclaimed Islamist. Image by getty images

British Jews are no more at risk from terrorism than they were before the slaying of a British soldier by suspected terrorists, British Jewry’s security unit said.

“For the Jewish community security, the primary lessons remain unchanged,” CST wrote Thursday on its website. “Rather than living in fear, we should be alert to the full picture of terrorist activities and rhetoric here in Britain, whether it be Jihadist, far Right or whatever.”

British police wounded and then arrested two men suspected of using a large knife to kill a soldier in the Woolwich district of London in a daylight attack. One of the assailants was recorded on video at the scene saying, “We swear by almighty Allah we will never stop fighting you. The only reason we have done this is because Muslims are dying every day. This British soldier is an eye for an eye, a tooth for a tooth.”

Mark Gardner, CST’s director of communications, told JTA that “there is no concrete evidence to suggest that Wednesday’s attack was connected to British Jews.”

Notwithstanding, CST’s statement read, “We are keenly aware that the same Jihadists who want to kill soldiers may well also want to kill Jews. This happened in Toulouse, in March 2012, when Mohamed Merah’s murder of French soldiers was the prelude to his killing three Jewish children and a rabbi at the Otzar HaTorah school. That morning, Merah apparently set out to kill a policeman. He failed, so simply switched targets.”

CST’s Muslim counterparts are “already reporting a wave of violence and intimidation against random Muslim targets throughout Britain,” the statement said. “This racist violence is as stupid and counterproductive as those waves of anti-Semitism repeatedly suffered by Jews in Britain (and elsewhere) since the Year 2000.” “Looking forward,” the statement continued, “the risk of actual far Right terrorism against a Muslim target is surely heightened; as is the danger of other Jihadists trying to copy the Woolwich murderers, using the most basic of easily available ‘cold weapons. ‘ ”

The president of the Board of Deputies of British Jews, Vivian Wineman, said in a statement, “Our thoughts are with the victim of the horrific and barbaric murder. We stand with other faith groups in deploring violence in the name of religion.”

Also Thursday, Israeli President Shimon Peres sent a letter of condolence to the family of the dead soldier and the people of Britain in the wake of the attack.

“Terrorism is a global threat and one the world must face together,” Peres wrote. “I know that the people of Britain will stand strong in the face of this threat and the State of Israel stands side by side with them.”