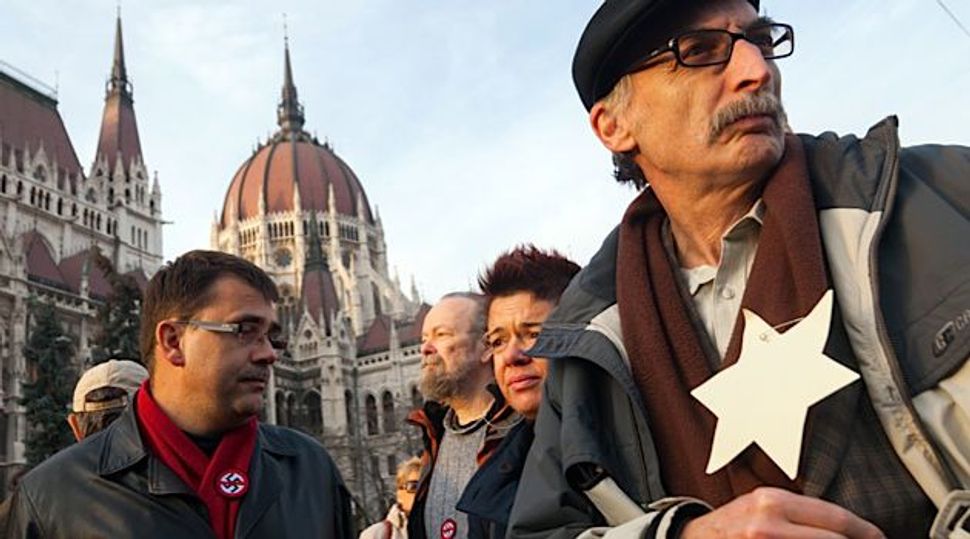 Protesters gather outside of the Hungarian Parliament to speak out against domestic anti-Semitism. Image by Getty Images

A lawmaker for the ultra-nationalist Jobbik party in Hungary said the Auschwitz death camp museum “may not reflect real facts.”

Tamas Gaudi-Nagy made the statement on Thursday during a discussion in Parliament on a proposal to facilitate visits by teenagers or young adults to the former Nazi camp Auschwitz-Birkenau in Poland, where approximately one million Jews were murdered.

The Hungarian news agency MTI reported that Gaudi-Nagy said the site “may not reflect the real facts of history,” and that schools should not be “forced to take up such an expensive venture.”

The statement drew condemnations from Hungary’s ruling party as well as from its leading Jewish group.

“Nobody has the right to question the Holocaust, the suffering and death of millions of people,” the leader of the ruling Fidesz party, Antal Rogan, said in a statement released Thursday.

The Federation of Hungarian Jewish Communities, or Mazsihisz, called on “democratic deputies in parliament” to reject Gaudi-Nagy’s remarks and also called on the house speaker “to initiate legal proceedings to restore the reputation of parliament”.

“Though the deputy did not openly deny the Holocaust, he made a sly suggestion that the memorials put up where several million victims were executed do not reflect the truth,” the Mazsihisz said in its statement. “Gaudi-Nagy’s remarks have desecrated the memory of over 400,000 Hungarians who were exterminated there.”

Jobbik, Hungary’s third-largest party, has been termed “a neo-Nazi” party by Hungary’s Jewish watchdog on anti-Semitism, the Action and Protection Foundation, or TEV. Last year, one of its lawmakers, Marton Gyongyosi, said “it was time” that a list of Hungarian Jews be drawn up as they posed “a national risk,” though he later said he was referring only to Hungarians with Israeli passports.