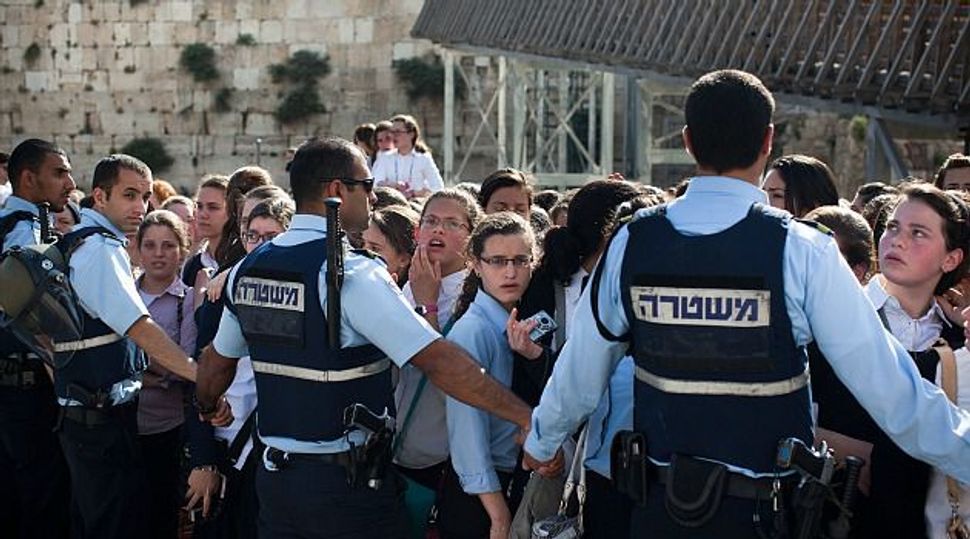 Again?: Ultra-Orthodox activists are calling for a massive protest against this month?s Women of the Wall prayer service at the Western Wall. Will violence erupt again? Image by getty images

Women of the Wall announced plans to read from a Torah scroll at its upcoming service at the Western Wall. Also leading up to Sunday’s service, several leading haredi Orthodox rabbis called on thousands of haredi men to gather for a mass prayer opposite Women of the Wall.

Women of the Wall gathers at the beginning of every Jewish month for a women’s Rosh Chodesh service at the Western Wall. Members have been arrested in the past for wearing prayer shawls due to a law forbidding any practice that falls outside of the wall’s “local custom.” The women last read from a Torah scroll at the wall several years ago. In April, though, a judge determined that the group’s activities – including reading from a Torah scroll — did not contravene the law. The group originally planned to read from a Torah scroll at last month’s service, but then decided to forgo the reading – acquiescing to a request from Religious Services Minister Naftali Bennett that aimed to maintain a measure of calm at the wall.

“We could have done it last month, but Bennett asked us to make a certain compromises and we agreed for one month to show our good will,” Lesley Sachs, the group’s director, told JTA Wednesday. “There was no question we would bring it this month. Without it, it’s not a full service.”

In the wake of April’s court decision, Bennett has been charged, together with Justice Minister Tzipi Livni, with formulating statutes that would clarify the “local custom” law. Bennett met with Women of the Wall representatives Wednesday in what Sachs called a “very productive meeting.”

Bennett has in the past called on the group to refrain from reading from the Torah and wearing tefillin at the wall. Sachs said there was “nothing new” at Wednesday’s meeting.

The absence of a Torah scroll last month, though, did little to prevent unrest during Women of the Wall’s service.

Thousands of haredi young women packed the Western Wall Plaza during the service, and several dozen haredi men protested, with some throwing coffee, water and a chair at the protesters.

The call for thousands of men to mass for this month’s service, according to haredi news site Kikar Hashabbat, included an admonition against violence.

“It will be a show of sanctification of God’s name,” said Deputy Jerusalem Mayor Yossi Deutsch, who is haredi. “Many will come, according to the instruction of great rabbis, to sanctify the name of heaven and prove that we will not surrender in the battle over the holiness of the Western Wall.”

Sachs said that she does not think reading from a Torah scroll should incite haredi protest.

“We’re not there to provoke,” she said. “We just want to do the new month’s service, which does include the Torah scroll.”