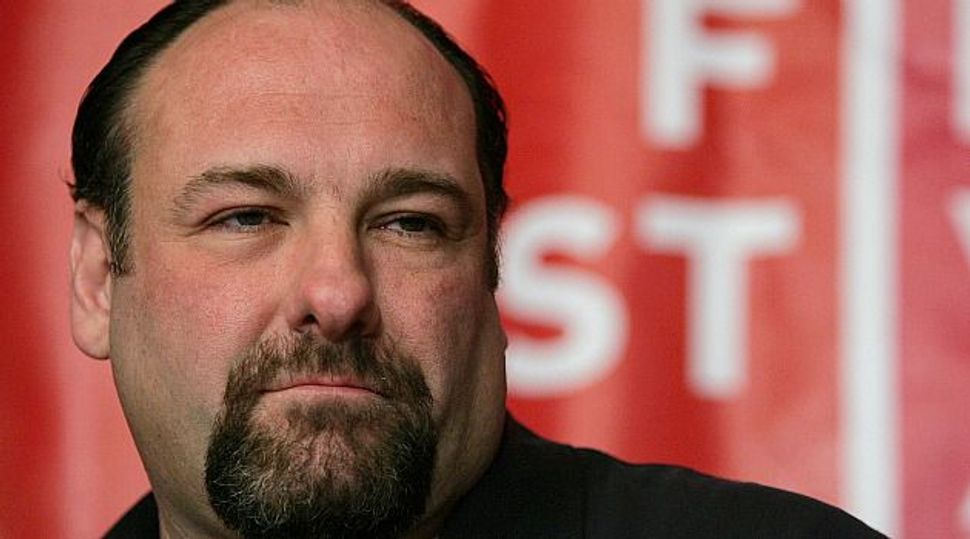 Meyer?s Racket: James Gandolfini, who died at 51, wasn?t Jewish. But he played one on the big screeen. Image by getty images

Italian-American actor James Gandolfini, who died at 51, while not Jewish, showed a deep affinity with Jews. His most iconic role, Tony Soprano, in the award-winning mafia TV series “The Sopranos,” was engaged in a very Jewish business. There were many Jewish gangsters and criminals both in film and reality. These included crime czar Hyman Roth (Lee Strasberg) in “The Godfather: Part II” (1974) – a fictional character, based heavily on real-life gangster Meyer Lansky.

One of Tony’s closest confidants was Herman “Hesh” Rabkin, a retired music industry producer who knew Tony’s late father. Tony often relied on Hesh for advice (and occasionally money) and, in return, he was one of the few characters not to meet an untimely death.

Brutal but fragile, Tony struggled with the emotional demands of being the head of a family, in both senses of that term. Consequently, he attended regular sessions with a psychoanalyst. Although he chooses another Italian-American, Dr. Jennifer Melfi (Lorraine Bracco), as his therapist, he is very aware of the profession’s Jewish provenance. As his disgusted mother Livia (Nancy Marchand) bluntly put it, “Everybody knows that it’s a racket for the Jews.”

Tony’s daughter, Meadow, was played by a Jewish actress (Jamie-Lynn Sigler). When Meadow begins to date a fellow student at Columbia University, who is half-black and half-Jewish, Tony has much to say about it, but expresses no annoyance at his Jewishness.

Outside of “The Sopranos,” Gandolfini played Tony Baldessari in Sidney Lumet’s “A Stranger Among Us” (1992), a police drama that unravels within New York City’s Hasidic community. He teamed up with the Jewish director again in 1996 for “Night Falls on Manhattan.” In between those two films he appeared in Barry Sonnenfeld’s “Get Shorty” (1995).

But perhaps his most Jewish role came in Spike Jonze’s “Where the Wild Things Are” (2009), an adaptation of Maurice Sendak’s classic illustrated children’s story.

Gandolfini, whose performance as Tony Soprano made him a household name and ushered in a new era of American television drama, had been scheduled to attend the closing of the Taormina Film Festival in Sicily on Saturday.

He may have suffered a heart attack, Mara Mikialian, the spokeswoman for the HBO network that produced The Sopranos, told Reuters.

He was taken from his Rome hotel to the city’s Umberto I general hospital where staff found his heart had already stopped at about 11 p.m. local time (2100 GMT), a hospital spokesman said.

Since “The Sopranos” ended its six-season run in June 2007, Gandolfini appeared in a number of big-screen roles, including “Zero Dark Thirty,” a film about the hunt for Osama bin Laden, and the crime drama “Killing Them Softly.”

At the time of his death, he had been working on an upcoming HBO series “Criminal Justice” and had two motion pictures due out next year.

“We’re all in shock and feeling immeasurable sadness at the loss of a beloved member of our family,” HBO said in a statement. “He was a special man, a great talent, but more importantly, a gentle and loving person who treated everyone, no matter their title or position, with equal respect.”

Gandolfini began his career as a stage actor in New York and went on to earn a Tony nomination for his role in the original 2009 Broadway cast of the black comedy “God of Carnage.”

He shared Tony Soprano’s Italian-American heritage and New Jersey roots, but the actor was known for a reserved demeanour off-camera and generally shied away from publicity.

In the HBO series, Gandolfini created a gangster different from any previously seen in American television or film. He was capable of killing enemies with his own hands but was prone to panic attacks. He loved his wife, Carmela, played by Edie Falco, and was a doting father, but he carried on a string of affairs.

He regularly saw a therapist, portrayed by Lorraine Bracco, to work out his anxiety problems and issues with his mother.

By the start of the show’s final season, Gandolfini suggested he was ready to move on to more gentle roles once his TV mobster days were over.

“I’m too tired to be a tough guy or any of that stuff anymore,” he said. “We pretty much used all that up in this show.”

The program, which earned Gandolfini three Emmy Awards as best lead actor in a drama series, was considered by many critics the finest drama to have aired on U.S. television.

The series was a major factor in establishing HBO, a pay-cable network once focused on presentations of feature films, as a powerhouse of original dramatic television and in shifting the kind of sophisticated storytelling once reserved for the big screen to TV.

The show won the Emmy as best drama series in 2004 and again in 2007 after its final season. The series concluded with a final episode that strongly suggested Tony was about to be murdered before abruptly ending mid-scene, cutting from a shot of Gandolfini’s face to a blank screen.

His role paved the way for a parade of popular prime-time shows built around profoundly flawed characters and anti-heroes, from “Dexter” and “Breaking Bad” to “Mad Men” and “Nurse Jackie.”

David Chase, creator of “The Sopranos,” paid tribute to his former star in a statement remembering him as “a genius” and “one of the greatest actors of this or any time.”

“A great deal of that genius resided in those sad eyes. I remember telling him many times, ‘You don’t get it. You’re like Mozart.’ There would be silence at the other end of the phone,” Chase recounted.

Actress Marcia Gay Harden, his co-star in “God of Carnage,” saluted Gandolfini as a “great partner, masterful actor and a loving, generous human being.” Susan Sarandon, who played his wife in the 2005 romantic comedy “Romance and Cigarettes,” remembered him in a Twitter posting as “One of the sweetest, funniest, most generous actors I’ve ever worked with.”

Gandolfini is due to appear on the big screen next year, playing the love interest of comic actress Julia Louis-Dreyfus in the film “Enough Said” and a role in a New York crime drama called “Animal Rescue.” Both are set for U.S. release by News Corp-owned studio Fox Searchlight.

Gandolfini preceded his career as a performer by working as a truck driver, bouncer and nightclub manager in New York City before he went to an acting class with a friend and got hooked.

“I’d also never been around actors before,” he told Time magazine, “and I said to myself, ‘These people are nuts; this is kind of interesting.’”

Born in Westwood, New Jersey, Gandolfini was raised in a working-class, Italian-American family by a father who was a bricklayer and high school custodian and a mother who worked in a school cafeteria.

In an interview on the television program “Inside the Actors Studio,” he said his parents spoke Italian in the home when they did not want the children to understand them.

“So they didn’t teach it to my sisters or myself,” he said.

Gandolfini had a son, Michael, with his first wife, Marcy Wudarski, whom he divorced in 2002. In 2008, he married model Deborah Lin, who gave birth to a daughter, Liliana, in 2012.