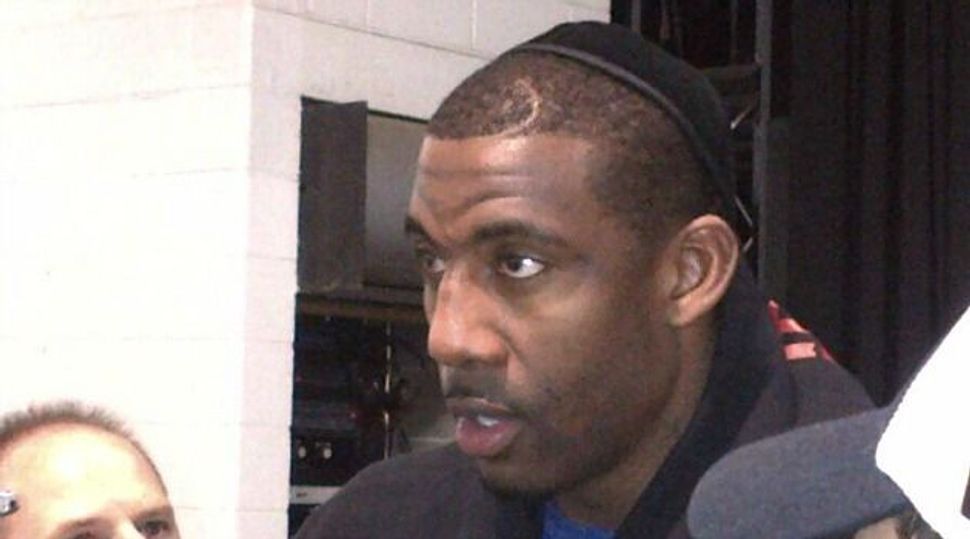 Amar?e Stoudemire wears a kippah to show his Jewish heritage. Image by Twitter/@FisolaNYDN

Amar’e Stoudemire is showing that he really owns his connection to Judaism.

The Knicks player with Jewish roots announced on his Twitter account that he has joined a group that is trying to purchase the Hapoel Jerusalem basketball team.

“Excited to join the partnership that is giving back to the city of Jerusalem by offering the Hapoel basketball team a fresh start,” he tweeted Friday morning.

Stoudemire, whose Twitter handle is @amareisrael, joins entrepreneur Ori Allon and others in the bid to buy the troubled team. Hapoel Jerusalem has had a chronic underachievement problem, which has been attributed in the Israeli media to poor management. Overshadowed by powerhouse Maccabi Tel Aviv, Hapoel Jerusalem has failed in recent decades to win any championships. (Stoudemire had actually considered playing for Maccabi Tel Aviv during the 2011 NBA lockout.)

Clearly, Stoudemire has faith that Hapoel Jerusalem’s record can be turned around.

The Knicks’ star forward, who missed much of the 2012-2013 NBA season due to a knee injury, visited Israel in 2010 to get in touch with his mother’s family’s Jewish roots. He has a Star of David tattoo, but his connection to Judaism is more than skin deep. Stoudemire reportedly incorporates various Jewish practices into his life, including keeping kosher and observing Shabbat and Passover. He wore a tallit and kippah at his wedding to his wife Alexis in 2012.

Stoudemire will be heading to the Holy Land soon to coach the Canadian team at the upcoming 19th Maccabiah Games, which begin on July 17.