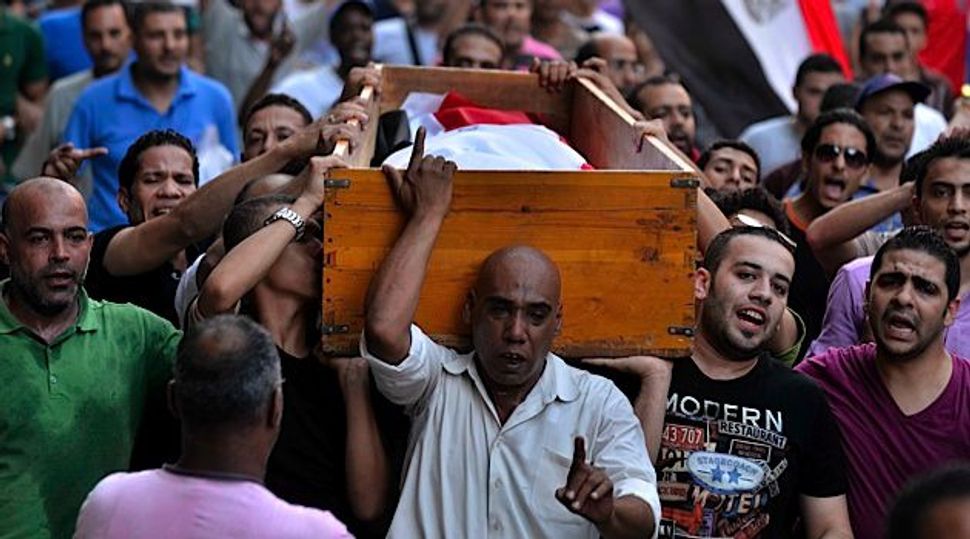 As protests rage, dozens are killed and thousands injured. Image by Getty Images

Egypt’s political transition after President Mohamed Mursi’s ouster by the military has stumbled at the first hurdle, as the choice of liberal politician Mohamed El Baradei as interim prime minister was thrown into doubt by Islamist objections.

Mursi’s Muslim Brotherhood movement called for further protests on Sunday after dozens of people were killed and more than 1,000 wounded on Friday in clashes between his supporters, opponents and the military.

The violence across the Arab world’s most populous state saw rival factions fighting street battles in central Cairo and many others cities and towns, and underlined the pressing need for a swift and inclusive political solution.

The state Al-Akhbar newspaper, critical of the Brotherhood, ran the headline “The Brotherhood Killed Children in Alexandria” above images purportedly showing a youth being pushed from a concrete tower onto a rooftop by Mursi supporters.

The Mediterranean city, where 14 people have died, was scene of some of the worst clashes in the dramatic upheaval since Mursi’s removal from office, which comes just over two years after autocratic former president Hosni Mubarak was toppled in a popular uprising.

ElBaradei’s nomination had been confirmed by several sources and state media on Saturday, but just before midnight a presidential spokesman told reporters that the prime minister had not in fact been chosen.

The abrupt U-turn came amid opposition to the appointment by the hardline Islamist Nour Party, Egypt’s second Islamist force after the Brotherhood, highlighting the challenge the military faces in finding consensus among liberals and conservatives on who should run the country.

“We extend our hand to everyone. Everyone is a part of this nation,” the spokesman told reporters. “The Muslim Brotherhood has plenty of opportunities to run for all elections including the coming presidential elections or the ones to follow.”

Minutes after he spoke, state media reported that the public prosecutor ordered four top Brotherhood leaders who were held this week to be detained for a further 15 days on accusations that they incited violence against protesters.

The Brotherhood has said it wants nothing to do with the military’s plans for a new interim government. It wants Mursi reinstated and has pledged to keep protesting until he is.

The Nour Party, however, had agreed to the army-backed transition plan leading to new elections. Its withdrawal from the process would strip that plan of vital Islamist support.

Huge protests were staged on June 30 to pressure Mursi into resigning amid growing anger at economic stagnation and the perception among many that the Brotherhood wanted to take control of every part of the state, a charge it denies.

Millions took to the streets to cheer his ouster on Wednesday, but for many Islamists it was a bitter reversal that raised fears of a return to the suppression they endured for decades under autocratic rulers like Mubarak.

The military said it had not carried out a coup, but merely enforced the will of the people.

The events of the last week have raised alarm among Egypt’s allies in the West, including main aid donors the United States and the European Union, and in Israel, with which Egypt has had a U.S.-backed peace treaty since 1979.

On Saturday, President Barack Obama condemned the violence and said the United States was not working with any particular party or group in Egypt.

Washington has not condemned the military takeover or called it a coup, prompting suspicion within the Brotherhood that it tacitly supports the overthrow of the country’s first freely elected president.

Obama has ordered a review to determine whether annual U.S. assistance of $1.5 billion, most which goes to the Egyptian military, should be cut off as required by law if a country’s military ousts a democratically elected leader.

U.S. Defense Secretary Chuck Hagel held three conversations with the head of Egypt’s armed forces on Friday and Saturday, emphasising the need for “a peaceful civilian transition in Egypt”, the Pentagon said on Saturday.

Egypt can ill afford to lose foreign aid. The country appears headed for a looming funding crunch unless it can quickly access money from overseas. The local currency has lost 11 percent of its value since late last year.

ElBaradei has been quoted by newspapers as saying he expected Gulf Arab monarchies that were hostile to the Brotherhood’s rule to offer financial support to the new authorities.

But an Egyptian pipeline supplying gas to Jordan was hit by an explosion on Saturday in an apparent attack. The blast in the largely lawless Sinai peninsula followed a spate of attacks there that have claimed six lives this week.