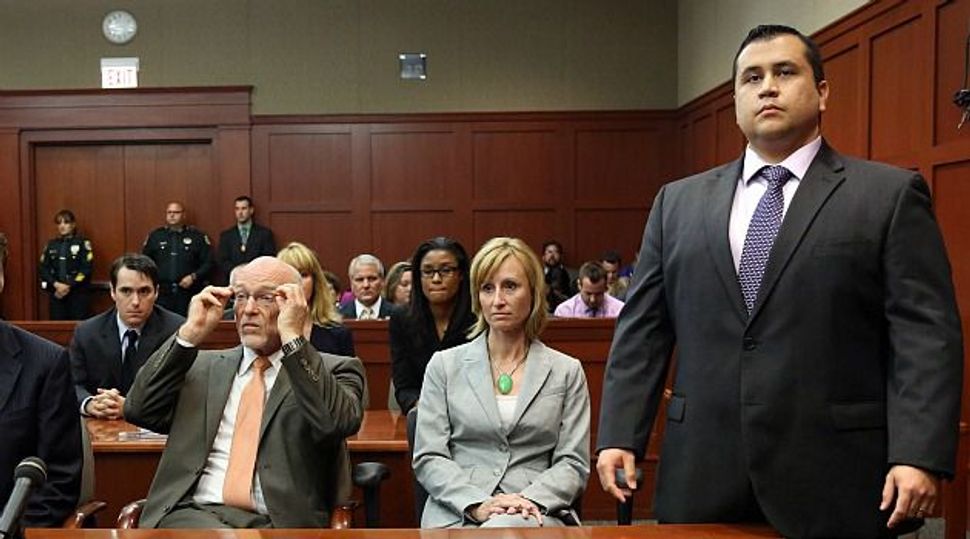 Free To Go: George Zimmerman stands as the judge prepares to announce his not guilty verdict in the killing of Florida teenager Trayvon Martin. Image by getty images

The panel of six women deliberated more than 16 hours over two days until nearly 10 p.m. on Saturday (0200 GMT Sunday) before delivering the verdict, which drew immediate condemnation from some civil rights groups.

Zimmerman appeared stoned-faced as the verdict was announced, but then showed a slight smile of relief. His parents embraced each other and his wife was tearful.

“I think the prosecution of George Zimmerman was disgraceful,” said his attorney Don West. “As happy as I am for George Zimmerman, I’m thrilled that this jury kept this tragedy from becoming a travesty.”

Outside the courthouse, the decision drew angry shouts from some of the dozens of demonstrators who had gathered during the day in support of Martin’s family.

“People were crying. It showed the justice system does not have their backs,” said Jared Hamil, 25, a Tampa warehouse worker.

Martin’s parents were not in the court during the reading of the verdict. But his father, Tracy Martin, later tweeted that his son would have been proud of the fight put up for him.

“Even though I am broken hearted my faith is unshattered,” he wrote. “Together can make sure that this doesn’t happen again.”

Zimmerman, 29, who is white and Hispanic, said Martin, 17, attacked him on the night of Feb. 26, 2012, in the central Florida town of Sanford. Prosecutors contend the neighborhood watch volunteer in his gated community was a “wannabe cop” who tracked down the teenager and shot him without justification.

The jury could have convicted him of second-degree murder, which would have carried a sentence of up to life in prison, or manslaughter. The jurors, who remain anonymous, declined to speak to the press.

“Today, justice failed Trayvon Martin and his family,” Roslyn Brock, who chairs the National Association for the Advancement of Colored People, said in a statement.

“We call immediately for the Justice Department to conduct an investigation into the civil rights violations committed against Trayvon Martin. This case has re-energized the movement to end racial profiling in the United States.”

Civil rights activist Jesse Jackson tweeted within minutes of the acquittal: “Avoid violence, it will lead to more tragedies. Find a way for self construction not deconstruction in this time of despair.”

What happened in Sanford that February night may never have gone beyond the back pages of a local newspaper if police had immediately arrested Zimmerman.

But he walked free for more than six weeks after the shooting, because police believed his assertion of self-defense, triggering protests and cries of injustice across the country.

This forced the resignation of Sanford’s police chief, and brought U.S. Justice Department scrutiny to this town of 54,000 residents not far from Disney World in Orlando.

It also drew comment from President Barack Obama, who said: “If I had a son, he’d look like Trayvon.”

Bernie de la Rionda, the assistant state attorney who was the chief prosecutor in the case against Zimmerman, said he and his two fellow prosecutors were disappointed with the outcome but accepted the verdict.

“We live in a great country that has a great criminal justice system. It’s not perfect, but it is the best in the world and we respect the jury’s verdict,” he said.

Benjamin Crump, a Florida lawyer representing Martin’s family, said he hoped the public reaction to the verdict would be peaceful. But he did not conceal his sense of injustice over the trial’s outcome.

“The whole world was looking at this case for a reason, and what people wanted to see, as we all said, was how far we had come in America in matters of equal justice,” said Crump. “We have to have very responsible conversations about how we get better as a country and move forward from this tragedy and learn from it.”

The Seminole County Sheriff’s Office said it had heard nothing about any potential violent reaction to the verdict in and around Sanford, where about 30 percent of the residents are black.

Near a makeshift memorial to Martin in Sanford, only a few people showed up after the verdict.

Reaction around the country also appeared peaceful in the hours after the verdict.

About 40 protesters gathered at Daley Plaza in downtown Chicago, said Officer Ron Gaines, a spokesman for the Chicago Police Department. Officers were watching the gathering, he said.

In San Francisco, news video footage showed a few hundred protesters marching through the middle of a street, with some holding signs and others raising their fists in the air. Police vehicles followed them on the sidelines of the march.