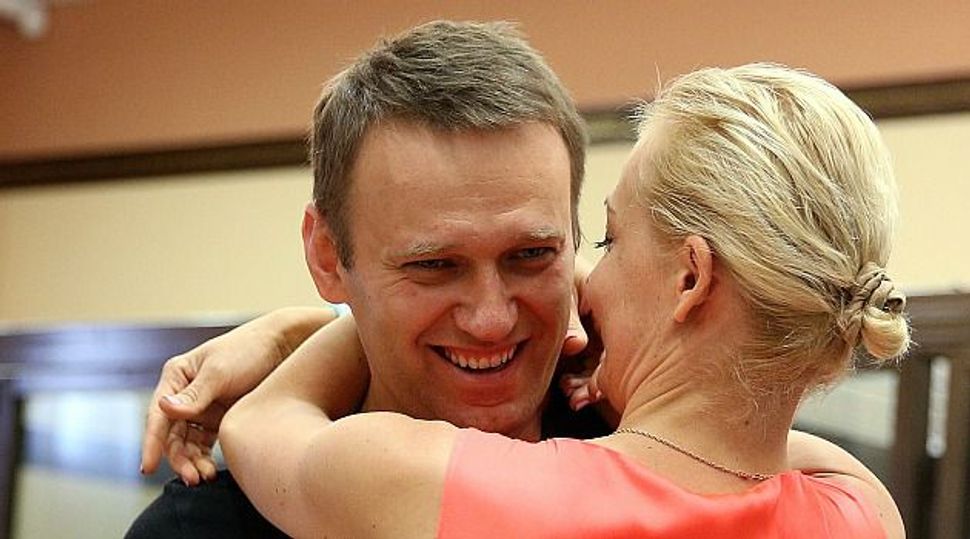 (JTA) — On the rooftop of a Soviet-era apartment block, a young man straps into climbing gear and rappels down the side as a small gathering of city workers and police officers watch from below.

On the way down, the climber stops at a balcony and tears loose one of the thousands of banners hung across Moscow bearing the name of Alexei Navalny, a nationalist anti-corruption crusader and the leading challenger in Moscow’s Sept. 8 mayoral elections.

The banners, which authorities are removing from private residences on the grounds that they violate advertising regulations, are part of a campaign strategy developed for Navalny by Leonid Volkov and Maksim Kats, two tech-savvy Jews who are providing Navalny with outside-the-box strategies designed to offset his disadvantage against the incumbent, Sergey Sobyanin, who is backed by Russian President Vladimir Putin.

“Authorities have intimidated ad agencies out of working with us, so we crowd-sourced,” said Volkov, 32, a venture capitalist turned opposition politician. “Now they move to sabotage that, too.”

Navalny’s candidacy has divided Russian Jews, who are torn between the candidate of an establishment that has been generally good for the Jews and an opposition leader with nationalist associations some find troubling who nevertheless promises to restore democracy and good governance.

A firebrand whose critics accuse him of populism, Navalny apologized for calling Georgians “rodents” in 2008. But he has defended his appearance at nationalist marches and his calls for deporting illegal migrants.

Last week, several Jewish media outlets reported that Navalny had raised a toast to the Holocaust at a reception in Moscow last year – a story that reportedly was placed by an Israeli public relations firm. Navalny categorically denied the story, as did several Jews who were in attendance.

Navalny also has had legal troubles. In July, he was convicted of embezzlement, a ruling that may land him in jail for five years if he loses his appeal. Navalny is being investigated as well in connection with two other corruption probes that he says are fabricated. Many of his supporters have been detained by police.

“What I hear of Navalny does not sound good,” said Boruch Gorin, a top Chabad rabbi and editor in chief of L’chaim, a Russian Jewish monthly. “When I look at Putin’s party, I can say they have been good not only to the Jews but for multicultural Russia. And I am sure many Moscow Jews and non-Jews will remember this when voting.”

Polls conducted in late August in Moscow showed Sobyanin with a commanding lead, with 50 percent to 62 percent of the vote, followed by Navalny with 16 percent to 26 percent. The differential, coupled with what Volkov says is an effort by Russian authorities to restrict the campaign’s ability to get out its message, has led to some innovative strategies.

Volkov and Kats have helped Navalny build a massive presence on social networking websites, including a social network especially designed for his supporters. The candidate also has held town hall meetings with residents, “which are pretty standard elsewhere in the world, but strangely almost never happen here,” Kats said.

The campaign also has launched an online platform called Mosvpiska, which allows volunteers from outside Moscow to stay for free at the homes of Muscovites backing Navalny. Volkov says 40,000 people have registered their residences as Navalny homes on Mosvpiska and that half the registered homes are occupied with out-of-town volunteers.

“The campaign gets more volunteers, the volunteers get a place to stay for free and the opposition grows,” Volkov said. “Plus there’s no administrational hassle involved because the volunteers communicate directly online.”

For Navalny, whose slogan is “Change Russia, start with Moscow,” the mayoral campaign is about much more than who gets to run the nation’s capital city. Russia’s recent ban on “gay propaganda” is seen by many in the opposition as merely the latest example of the corruption of democracy that has become endemic in the Putin era. Navalny hopes that by getting elected, he can bring newcomers to power and change the country’s political paradigm.

“The Navalny campaign is not about managing the city better, that’s not the point,” said Kats, 28, a Hebrew teacher turned professional poker player who shocked many with his successful bid last year to get elected to the municipal council of a Moscow administrative district. “The point is to make big changes in the political life of the country.”

Thin and unassuming, with shaggy hair and powerful organizational skills, Kats lived in Israel for nine years before returning to Moscow at 17. Journalist Elena Kalashnikova recently wrote of Kats that he is a “strange outsider” in the Russian opposition, with a down-to-earth style more focused on securing sidewalk space for his constituents than on bringing down Putin.

For his part, Kats believes that living in Israel gives him an advantage in that he thinks differently from many Russians.

“Here people don’t believe they will succeed, they don’t believe in themselves, whereas in Israel they’re encouraged to go after what they want,” said Kats, the founder of an agency that represents poker players.

Kats believes Navalny has an “excellent chance” of making it to the second round of elections, a prospect that will only materialize if Sobyanin fails to win 50 percent of the vote on Sept. 8.

In pitching himself to Moscow Jews, Sobyanin can point to the opening of the Jewish Museum and Tolerance Center, a $50 million institution funded by the Russian state. Hanukkah celebrations are now held at the Kremlin, and under Putin’s leadership more than a dozen Russian cities have given land and building permits to Jewish communities.

Yet some Russian Jews find all this irrelevant.

“Sept. 8 is not about electing the president of Russian Jewry,” said Michael Edelstein, a lecturer at Moscow State University and a writer for L’chaim. “Putin is good for Jews but he’s bad for Russia. For more than 20 years we did not have political prisoners. Now we do.”