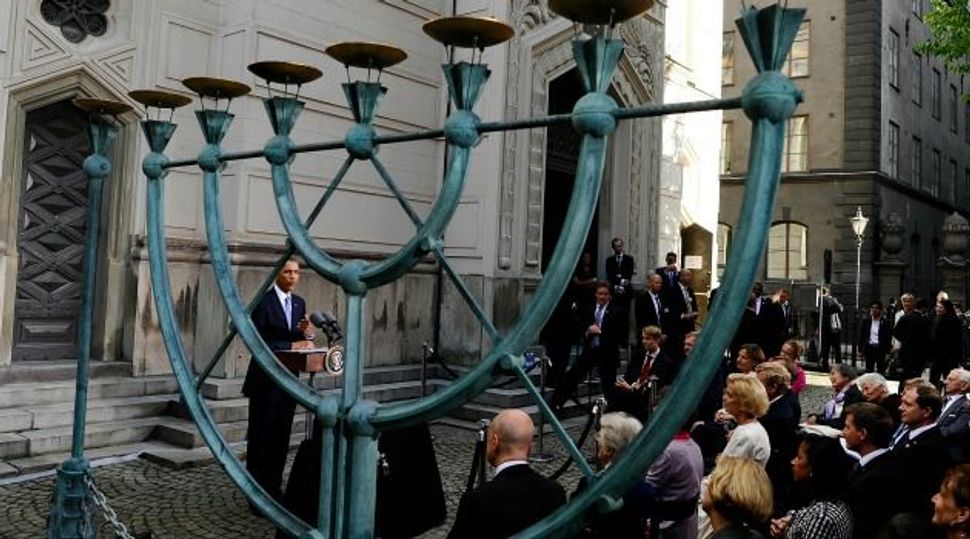 President Obama examined artifacts from the life of Raoul Wallenberg and wished Jews worldwide a “shanah tovah” during a tour of Stockholm’s Great Synagogue.

Wallenberg’s half sister, Nina Lagergren, 92, escorted Obama on Wednesday as he examined the belongings of the Swedish diplomat who saved thousands of Hungarian Jews during the Holocaust and later disappeared into Soviet custody.

At a Holocaust memorial outside the synagogue, Obama delivered a short Rosh Hashanah greeting.

“To all our Jewish friends here in Sweden, in the United States and around the world — especially in Israel — I want to wish you and your families a sweet and happy new year,” he said. “L’shanah tovah.”

Obama met with Swedish leaders and toured presentations of the country’s innovations in environmentally friendly technologies on a stopover before he headed to St. Petersburg for a G20 industrial nations summit.

The White House on Wednesday also released Obama’s video message for the Jewish New Year. The message recalled a speech delivered 50 years ago by Rabbi Joachim Prinz at the Lincoln Memorial, just prior to the Rev. Martin Luther King Jr.’s historic speech at the March on Washington.

“Representing the thousands of Jews there that day, [Prinz] told the marchers, ‘When God created man, he created him as everybody’s neighbor. Neighbor is not a geographic term. It is a moral concept,’ ” Obama said.

“As the High Holidays begin, it’s a chance not just to celebrate with friends and family, but to ask some of life’s most piercing questions: Am I treating strangers with kindness? Am I living not just for myself but for others? Am I doing my part to repair the world?”

Obama also recalled his visit to Israel earlier this year to “renew the unbreakable bond between our two countries.”