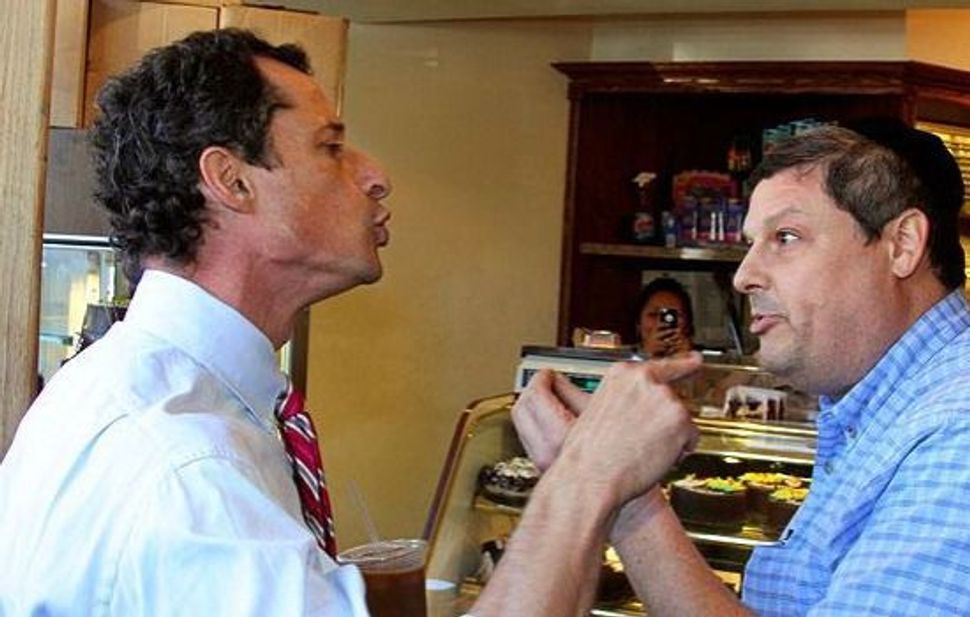 The Jewish man who started a war of words with Anthony Weiner admits making an anti-Arab remark about the embattled New York mayoral candidate’s wife as he campaigned in a Brooklyn bakery.

A hard-to-identify man was caught blurting out “married to an Arab” at Weiner as he stumped for votes in Weiss Family Bakery in the Orthodox neighborhood of Boro Park.

Saul Kessler, who reports say is in the real estate business, told CNN, “I’m not going to deny it” about the caught-on-tape remark that set Weiner off on Wednesday.

“It’s just a feeling I have as a Jew,” Kessler told the network, without elaborating.

Weiner is married to State Department official Huma Abedin, a Muslim who was raised in Saudi Arabia. She grabbed headlines by sticking by Weiner amid his serial sext-ing scandal.

The ex-lawmaker said he was making no apologies for standing up for himself and Abedin.

“If you say vile things about me and my family you can expect I’m going to come back at you,” Weiner said.

Weiner’s standing in the polls has plummeted sInce he admitted that he made more suggestive online contacts with women as recently as a few months ago.

He is trailing far behind the frontrunners in a Democratic primary set for Tuesday.

But with the race unsettled, some analysts say it’s possible that Weiner may get a boost from voters who side with him after hearing the details of the bizarre spat with Kessler. Unless one candidate gets 40% of the vote, the top two finishers will vie in a runoff for the right to face a Republican candidate in November.