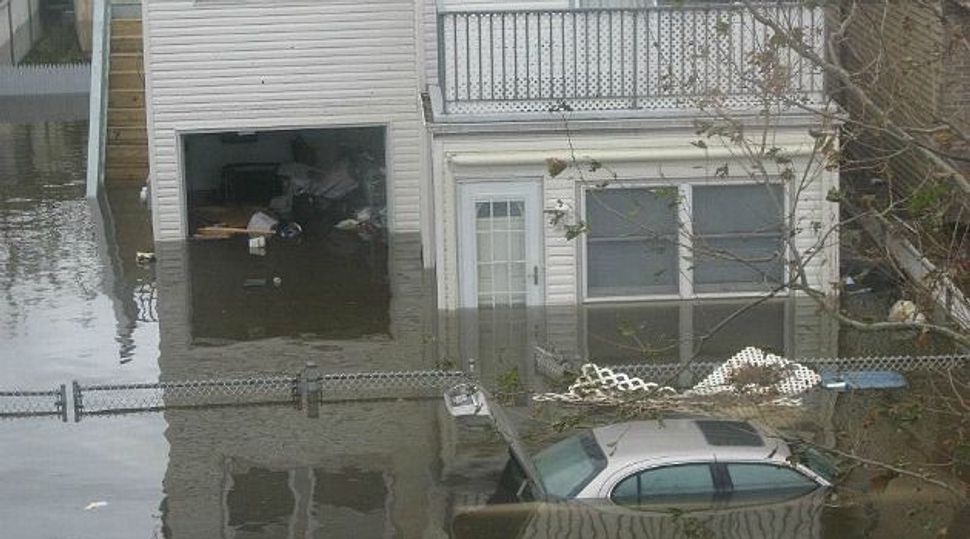 New Year?s Pain: This was the scene when Hurricane Sandy ripped through Staten Island last year. Months have passed, but many Jews have still not returned to their homes. Image by natalia demidova

Nine months ago, Natalia Demidova crouched on the second floor of her Staten Island home and watched her neighbor’s SUV race a 10-foot wave down the street. The wave crashed through Demidova’s quiet residential block in the South Beach neighborhood and flooded her home with more than two feet of water.

Demidova is among the many residents of South Beach still struggling to restore the life she had before Hurricane Sandy hit the northeastern United States last October. For most of the past year, she has been living with her family in a hotel while working to repair her severely damaged home. She had hoped to be able to move back last week, but instead is the High Holidays in the hotel.

“My 6-year-old, sometimes he wakes up in the middle of the night asking, will it happen again? Will there be another storm?” Demidova told JTA.

Like so many communities devastated by the superstorm, the Jewish community of South Beach has spent nearly a year rebuilding. Still, much remains to be done.

Last week, the Jewish Russian Learning Center, a Chabad-affiliated synagogue that opened in the neighborhood less than a year before Sandy, held an information session that aimed to guide homeowners through the maze of funds, tax breaks and remunerative opportunities available to the storm’s victims. The center also held a benefit concert in early August for itself.

“In the beginning, we gave out clothing and tried to help with emergency efforts,” said Esther Kushnirsky, who founded the center in Staten Island, a New York City borough, with her husband, Zeev. “Now there are different things to consider, like debt and trauma. Everyone is just trying to manage.”

Since the storm, Kushnirsky and his wife have found themselves serving many roles in the community’s revitalization, from emergency response to guiding families through the financial challenges of rebuilding. Children’s events at the center have featured counseling from Project Hope, a program of Ohel Children’s Home and Family Services that helps children heal from the trauma of the storm.

Shlomi Yagur, a South Beach resident and tugboat operator who worked in New Orleans after Hurricane Katrina and during the BP oil spill in the Gulf of Mexico, said the damage to his neighborhood “was one of the worst things I have ever seen.”

Yagur said the Kushnirskys have been very helpful in the aftermath of Sandy. He and his neighbors continue to rebuild and renovate after the storm, doing everything from replanting destroyed gardens to ripping up and rebuilding water-ravaged basements. The Jewish Russian Learning Center, he says, has helped his community come together.

The Kushnirskys are making accommodations for a community saddled with the crushing debt associated with Sandy, offering many programs for free or at a steep discount for storm victims, Esther Kushnirsky said. They include a Hebrew school program to begin after Rosh Hashanah.

But an initiative that was launched before the storm — the free installation of mezuzahs — has seen the most post-Sandy interest. Zeev Kushnirsky attributes the vast increase to the spiritual qualities of the mezuzah, which he calls “the ultimate home security device.”

“Many people in our community are Russian immigrants, with the Russian mentality of not needing help from anyone,” Esther Kushnirsky said. “But they lost their mezuzahs during Sandy or never had one in the first place, and after their homes were destroyed in the storm, they want that kind of spiritual protection over the house. So we have a very long waiting list for mezuzahs.”