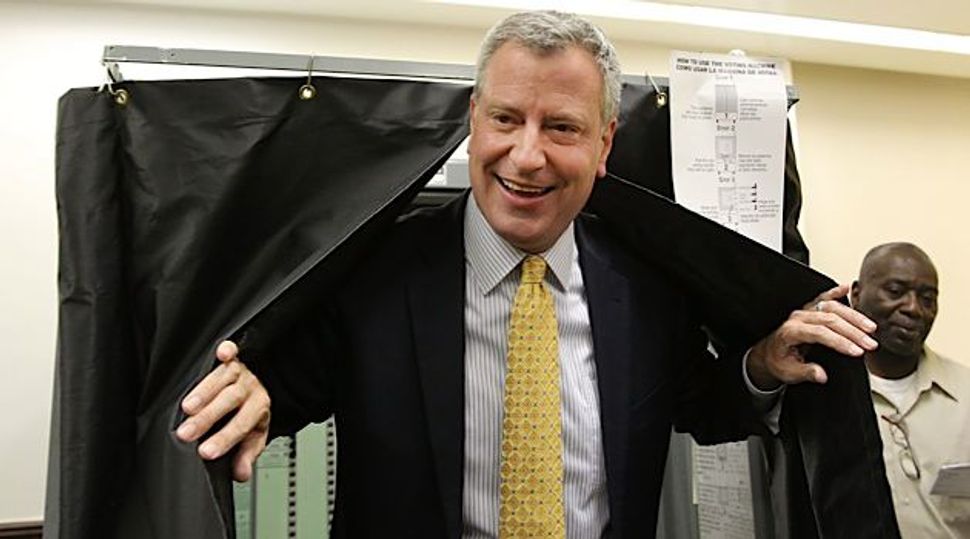 With 97% of the city’s precincts reporting, de Blasio has received 40.16% of the overall vote in the September 10 primary. Opponent Bill Thompson received 26%, Christine Quinn, who has conceded, received 15%.

If the total vote counts have de Blasio at 40% of the vote, the city’s public advocate may be able to skip a runoff contest.

According to the exit poll, Jews made up 19% of the electorate in the Democratic primary.

The split in mayoral preferences among Jews was mirrored in the Orthodox community, often seen as voting in a bloc but in fact deeply divided in this Democratic primary. While Modern Orthodox and Syrian Jewish groups leaned towards Quinn, ultra-Orthodox sects in Williamsburg and Boro Park, Brooklyn, were divided between de Blasio and Thompson. The powerful Satmar Hasidic sect, locked in an internal feud since 2006, split its efforts between de Blasio and Thompson, the two sides battling each other in a “Get out the vote” showdown.

At midday, Jewish Democrats on the Upper West Side voiced dissatisfaction with the Democratic candidates, with some saying they were open to voting for a Republican in November’s general election.

“I think she’s a straight shooter,” said Diana Basso, 54, of Quinn, who she said she had voted for her. Basso, who has Jewish family members, effusively praised Quinn’s experience in city government, but said that she had not yet decided on how she would vote in the general election.