German Literary Critic and Survivor of the Warsaw Ghetto, Dies at 93 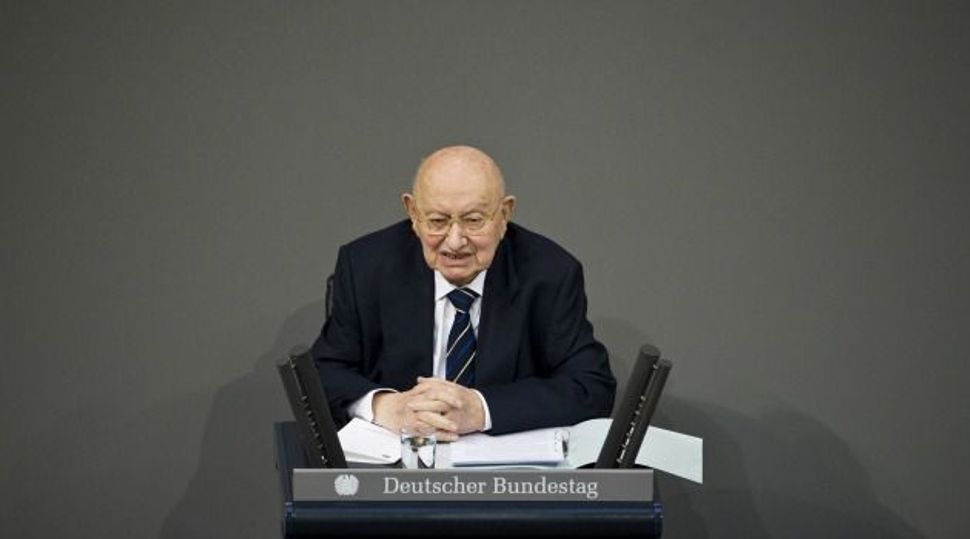 A Jewish Pope: Born in Poland in 1920 and a survivor of the Warsaw Ghetto, Marcel Reich-Ranicki went on to become one of the most beloved literary critics in Germany, known as ?The Pope of Literature.? Image by Getty Images

Marcel Reich-Ranicki, Germany’s best-known literary critic and a survivor of the Warsaw Ghetto, died on Wednesday aged 93, his publisher said.

Reich-Ranicki, a Jew born in Poland in 1920, almost perished at the Nazis’ hands in World War Two but went on to become one of the leading advocates of German literature and culture during his long post-war career as a journalist, writer and critic.

He became a revered figure in his adopted country, hosting a popular literary talk show on television from 1988 to 2002 and dishing out sometimes withering verdicts on other writers.

Frank Schirrmacher of the Frankfurter Allgemeine Zeitung, where Reich-Ranicki had been literary critic for many years, tweeted the news of his death and triggered an immediate flood of condolences from around the German-speaking world over the passing of a man widely known as “the pope of literature”.

“We have lost an incomparable friend of literature but also of freedom and democracy,” said Chancellor Angela Merkel.

“The fact that this son of a Jewish German-Polish family, who lost his parents and relatives in the death camps of the Nazis, still found his home in Germany and gave so much to our country is one of the remarkable events of the post-war period.”

In his best-selling autobiography “My Life”, Reich-Ranicki recounted his move to Berlin shortly before the Nazis’ rise to power, his family’s subsequent deportation back to Poland and their experience of being forced to live in the Warsaw Ghetto.

The memoir explores the tension between his life-long love of German literature, music and philosophy and the horrors of 20th century German history.

His parents died in the Treblinka death camp but he survived to join the Polish resistance and became a communist. Disillusioned with communist Poland, he later emigrated to West Germany where he flourished as a literary critic.

Reich-Ranicki was famed for saying what he thought and did not spare even acclaimed authors such as Nobel Laureate Guenter Grass when he felt harsh words were merited.

“The Germans love him. He is their raging bull who has always refused to be a sacred cow,” wrote Australian-born British broadcaster and writer Clive James, who tried to make Reich-Ranicki better known in the English-speaking world.

“Every living German writer wants his praise but it has always been hard to get: the reason, of course, why they would like to have it,” James wrote.

German Literary Critic and Survivor of the Warsaw Ghetto, Dies at 93