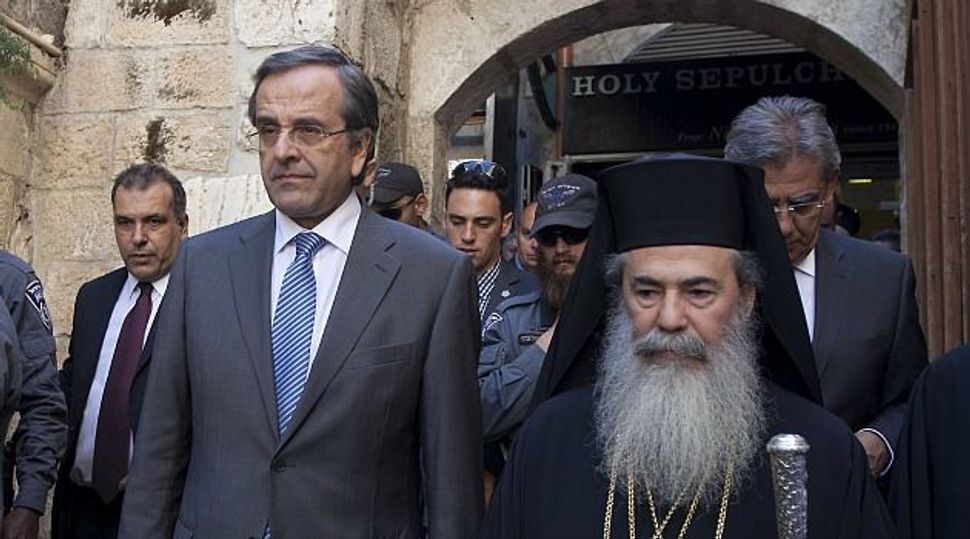 No Kippah: Greek Prime Minister Antonis Samaras visits the Church of the Holy Sepulchre in Jerusalem. When he got to Yad Vashem, he refused to don a yarmulke. Image by getty images

Organizers of the ceremony at the Hall of Remembrance urged Samaras to respect Tuesday’s ceremony and cover his head with a kippah or hat, but he laid a wreath at the memorial bareheaded, Ynet reported.

Samaras is leading a fight in Greece against right-wing extremists, as well as racism and anti-Semitism.

Yad Vashem said it regretted that Samaras would not wear a kippah, according to Ynet, “but that was his decision.”

The Holocaust memorial said guests are asked to cover their heads only when visiting the Yizkor tent, where ashes of the camps’ victims lay. In 2005, Turkish Prime Minister Recep Tayyip Erdogan also refused to cover his head. Former French President Jacques Chirac opted for a hat, according to Ynet.