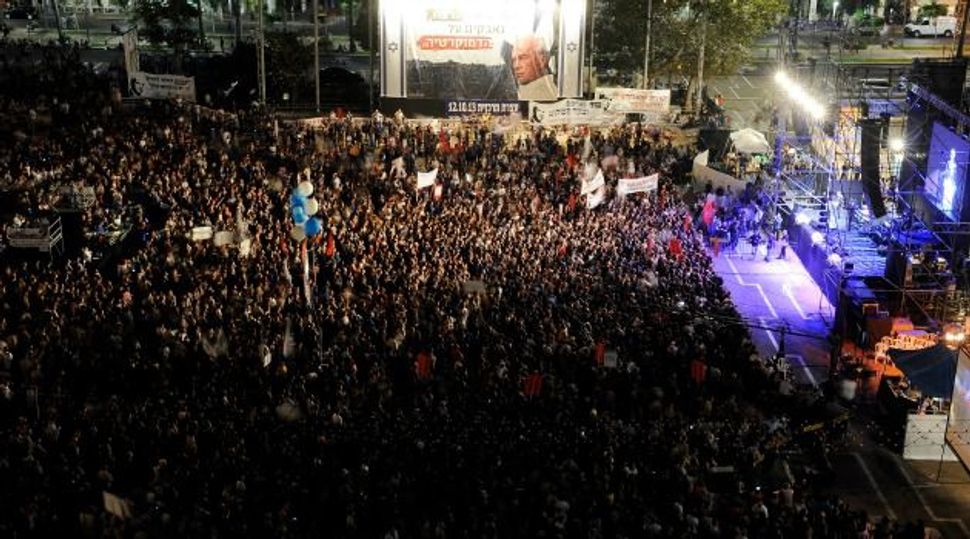 Some 35,000 Israelis from all walks of society gathered in Rabin Square in Tel Aviv to mark the 18th anniversary of the assassination of the former prime minister.

The memorial rally was held Saturday night under the banner of “Remembering the murder, fighting for democracy,” and was organized by a diverse committee of movements and organizations, including Dror Israel, Bnei Akiva, Hashomer Hatzair, the Student Union, and several American Jewish community federations.

Speaking at the event, Rabin’s grandson, Yonatan Ben Artzi, called on Benjamin Netanyahu to use the current peace talks with the Palestinians to finish what Rabin started.

“My grandfather was murdered over peace and you owe this peace to us, to all of us,” he said.

Rabin was assassinated on Nov. 4, 1995 by right-wing extremist Yigal Amir. The rally was held several days before the anniversary of the murder according to the Hebrew calendar, however.

Participating organizations and some individual leaders signed a declaration at the rally calling for a more democratic and inclusive society.

“At the turn of the 18th year since the assassination of Prime Minister and Defense Minister Yitzhak Rabin, we are coming out again with the mutual call to all citizens of the state of Israel for a higher capacity of Israeli democracy, under every circumstance and situation,” the declaration reads. “We will heavily admonish and denunciate, without fear, any incident of incitement and racism that stands opposed to the spirit and essence of the democratic way of life.”

The declaration also called on all sectors of Israeli society “to undertake our generations’ mission, with the understanding that Israel faces difficult, historic, and fateful decisions. These decisions can only be accepted through the democratic process. We seek to place the assassination of Prime Minister and Defense Minister Yitzhak Rabin as a warning sign to Israeli society as they deal with the prevalent and difficult decisions that are standing at our door, and to commit that every dispute will be decided through, and only through, the democratic process.”