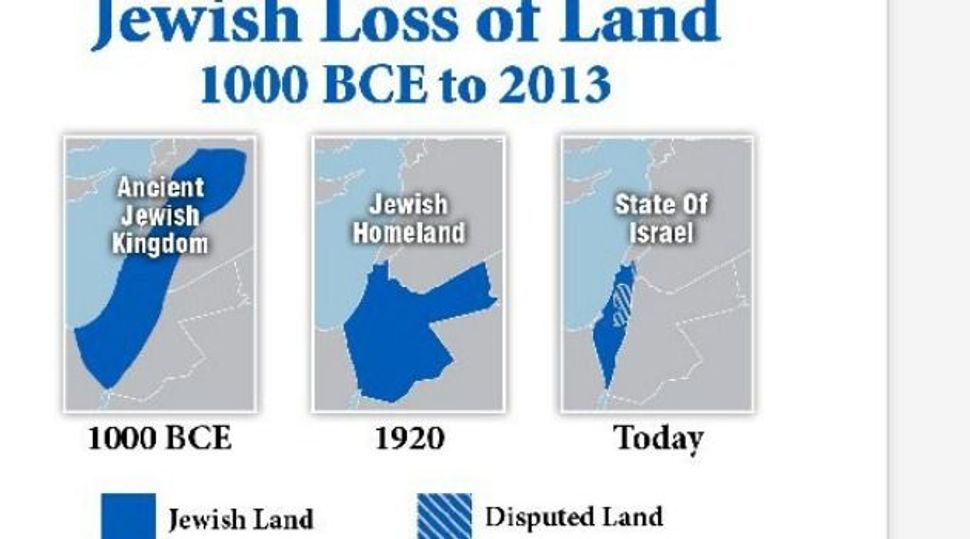 The pro-Israel ads include one series of three maps purporting to show “Jewish Loss of Land” and are dated from 1000 BCE until “Today.” Another depicts smiling Israeli and Canadian children with the statement “Shared Values & Freedom.”

The anti-Israel ads depict “Disappearing Palestine” on a series of four maps dated 1946-2012 that illustrate “Palestine” shrinking over the years.

“The anti-Israel ads distort facts,” StandWithUs CEO Roz Rothstein said in a statement. “They presume there once was an Arab country called ‘Palestine’ when in fact no such country ever existed.”

When the Palestine Awareness Committee ads originally went up earlier in the fall, the Jewish community here threatened legal action and attempted, unsuccessfully, to have TransLink, the Vancouver transit agency, reject the ads.

While the Palestine Awareness Committee has announced plans to run its ads in other Canadian cities, Meryle Kates, executive director of StandWithUs-Canada, said StandWithUs has no plans to expand its campaign.

The StandWithUs ads will run through the middle of November. The organization has previously responded to ads it views as critical of Israel in other North American cities.