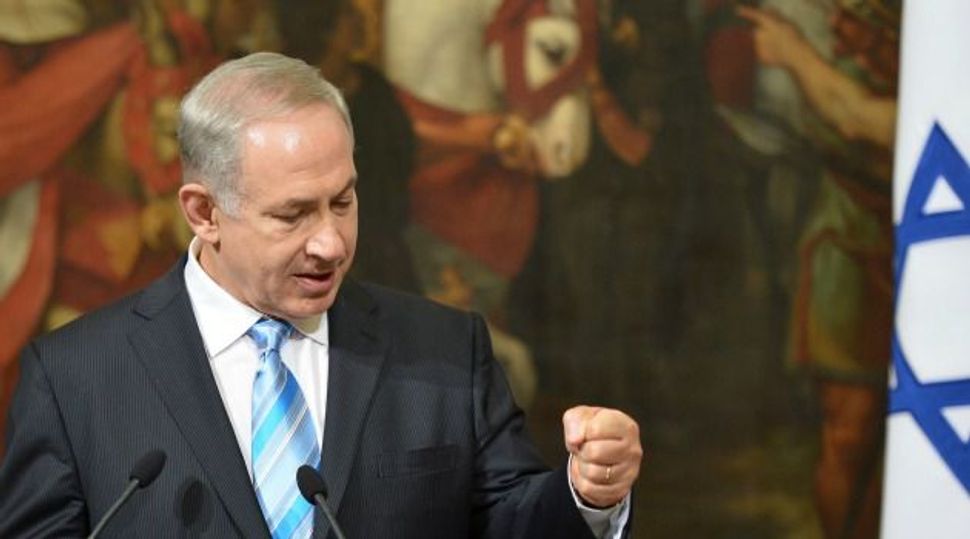 Lone Wolf: Benjamin Netanyahu insists on stricter nuclear rules for Iran than those faced by other nations. Image by getty images

U.S. and Israeli officials differed over Iran’s nuclear programme on Wednesday as Israel called for its effective dismantlement and the United States suggested better safeguards could assure that it is peaceful rather than military in nature.

“They should get rid of the amassed fissile material, and they shouldn’t have underground nuclear facilities, (which are) underground for one reason – for military purposes.” He called Iran’s programme the region’s foremost security problem.

The Islamic Republic says it is enriching uranium solely for electricity and medical treatments, not nuclear weapons. But its past concealment of sensitive activities from U.N. inspectors and continued restrictions on monitoring have raised suspicions.

Kerry, whose aides are exploring a diplomatic solution to rein in Iran’s nuclear activity, took a tack different from Netanyahu, suggesting Iran could show its programme was peaceful by adhering to international standards adopted by other nations.

“It will be vital for Iran to live up to the standards that other nations that have nuclear programs live up to as they prove that those programmes are indeed peaceful,” he said as the two started meeting at the U.S. ambassador’s residence in Rome.

“We will need to know that actions are being taken which make it crystal clear, undeniably clear, fail-safe to the world that whatever programme is pursued is indeed a peaceful programme,” he told reporters.

The United States has refused to rule out the possibility of taking military action against Iran. But U.S. officials say they wish to test every avenue to resolve the issue before going down that path, which could destabilise the Middle East.

“Secretary Kerry reiterated President Obama’s determination to prevent Iran from acquiring a nuclear weapon, even as we pursue a diplomatic course,” a senior U.S. State Department official said on condition of anonymity after the meeting ended.

Six global powers and Iran held talks last week in Geneva on ways towards a diplomatic deal, their first such negotiations since the June election of Rouhani, a relative moderate, opened doors for compromise after years of escalating confrontation.

Britain, China, France, Germany, Russia and the United States are due to hold a second round of those talks with Iran on Nov. 7 and 8, also in Geneva.

The senior U.S. official said Kerry and Netanyahu had an “in-depth” discussion of Israeli-Palestinian peace negotiations, which resumed on July 29. The United States has said they aim to yield a peace deal within nine months, of which nearly three months have already passed.

The core issues in the more than six-decade dispute include borders, the future of Jewish settlements in the occupied West Bank where Palestinians seek statehood, the fate of Palestinian refugees and the status of Jerusalem.

The senior U.S. official declined to say how much of the meeting was devoted to Middle East peace and how much to Iran, which took up the lion’s share of their public comments.

Iran cites a right to refine uranium for peaceful purposes under the nuclear Non-Proliferation Treaty, a 1970 global pact to prevent the spread of nuclear arms.

But the United States has said Iran does not automatically have that right under international law because, it argues, Tehran is in violation of its obligations under counter-proliferation safeguards. A series of U.N. Security Council resolutions since 2006 has demanded that Iran suspend all enrichment and heavy water-related activities.

Iran is building a heavy-water research reactor near the town of Arak, which when operational could yield plutonium and give Iran a potential second route to making fissile material for nuclear bombs, in addition to its enrichment of uranium.

Western experts say, and some diplomats privately acknowledge, that it is no longer realistic to expect Iran to halt all enrichment-related activities, since the Islamic Republic has sharply expanded such work in the past seven years and it is seen as a source of national pride and prestige.

Instead, they say, any deal should set strict, verifiable limits on the number of centrifuges that Iran can have and on the production of low-enriched uranium.