Germany Speeds Up Investigation Into Apartment Full of Nazi-Looted Art 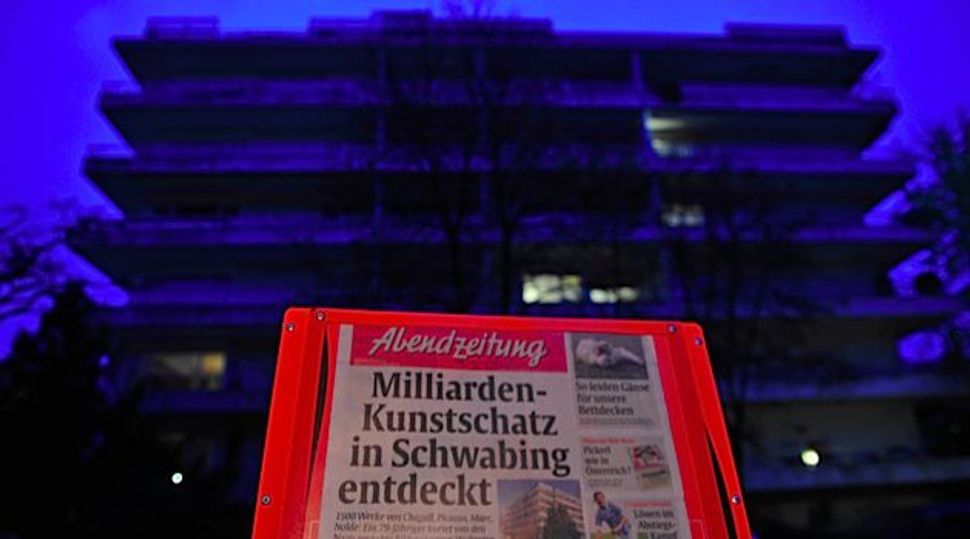 Hidden Treasure: One man hid 1,406 piece of precious art work in his Munich apartment. German authorities are now hastening the investigation into the collection which is believed to have Nazi ties. Image by getty images

The federal government’s intervention follows criticism that authorities stayed silent too long about 1,406 art works by European masters they stumbled upon last year.

Focus, based in Munich, said the government sent “several staffers” to the Bavaria justice ministry on Friday.

“The federal government is working hard to ensure that information about the confiscated works of art is made available as there are now indications that Nazi persecution could be involved,” Chancellor Angela Merkel’s spokesman Steffen Seibert said the same day.

Focus, which broke the Nazi art story a week ago, also said on Sunday customs experts believe some of the art cannot be legally returned to its original owners because it came from state museums – and restitution claims would likely fail.

Customs officials seized the paintings, sketches and sculptures from Cornelius Gurlitt in February 2012. They were hoarded by his father Hildebrand, a war-era art dealer put in charge of selling “degenerate” art by Adolf Hitler.

“A large portion of Hildebrand Gurlitt’s treasure confiscated from his son can probably not be returned to the rightful owners,” Focus magazine said, quoting from an internal customs office analysis made for the Finance Ministry that refers to 315 pieces of the “degenerate” art work found.

The legal status of the art remains murky and disputed nearly 70 years after World War Two. Some legal experts say Gurlitt may even get to keep it but others say Germany could nullify his ownership under the 1998 Washington Declaration, a set of principles for dealing with looted art.

The secrecy and the delay in publishing an inventory of the works, estimated to be worth up to 1 billion euros ($1.34 billion), has been criticized by those who say that publicizing such finds is vital to finding their rightful owners.

The Nazis plundered hundreds of thousands of art works from museums and individuals across Europe. Many are still missing.

The Munich trove been hailed as one of the most significant discoveries of looted art, fueling speculation about its provenance and claims from heirs of Jewish collectors who were robbed, dispossessed or murdered by the Nazis.

The 79-year-old recluse at the centre of the mystery, Cornelius Gurlitt, has vanished. He has not been charged but has been under investigation for tax evasion and concealment.

On Sunday Bild am Sonntag newspaper said Gurlitt had been seen near his Munich apartment last Monday. Der Spiegel news magazine said it had received a confused-sounding letter signed by Gurlitt dated Nov. 4 asking that it not use his name.

“The good news is about that is that Cornelius Gurlitt alive,” Der Spiegel wrote.

Separately, German authorities confiscated 22 paintings on Saturday from the house of Gurlitt’s brother-in-law Nikolaus Fraessle near Stuttgart, Bild am Sonntag said, after Fraessle called police himself to hand the art works over.

The federal government, which ordinarily leaves such cases to state justice officials, stepped up its involvement after the United States asked it to publish a list of the art works.

Focus quoted German Foreign Minister Guido Westerwelle as saying he was taking a personal interest in the case and that behind many of the paintings found “are quite likely dramatic stories of people pressured and persecuted” by the Nazis.

The apparent official reluctance to publish an inventory infuriated families whose ancestors were robbed by the Nazis.

Charlotte Knobloch, a leader of the German Jewish community in Munich, said it was bad enough that the looted art had not been returned sooner, but it would be a scandal if it turned out officials had wasted 18 months since its discovery.

“It can’t be possible that the injustices of the past are compounded now,” she said, appealing to Merkel to take charge.

Germany Speeds Up Investigation Into Apartment Full of Nazi-Looted Art