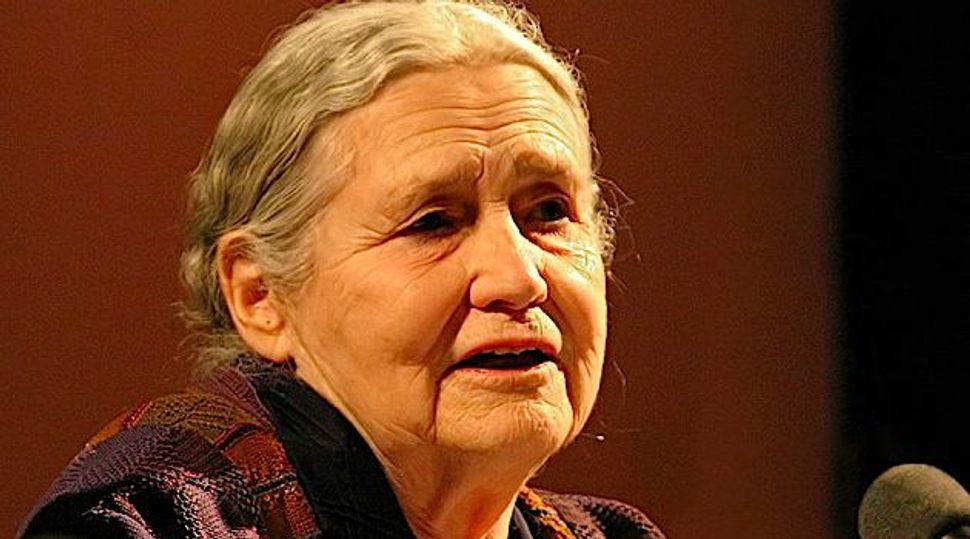 The novelist Doris Lessing, who tackled race, ideology, gender politics and the workings of the psyche in a prolific and often iconoclastic career, died in London on Sunday at the age of 94, her publisher HarperCollins said.

The British-Indian novelist Salman Rushdie hailed the “warmth, sharp mind and ferocity” of a writer who continually reinvented herself to challenge conventions, but defied the feminists and leftists who would have claimed her for their cause.

Lessing won the Nobel Prize for Literature in 2007, only the 11th woman to do so, but characteristically refused to offer the expected gushing response on hearing the news, observing drily: “One can get more excited than one gets, you know.”

Born to British parents in what was then Persia, now Iran, on Oct. 22, 1919, Lessing was mostly raised in Southern Rhodesia, now Zimbabwe, where they moved when she was five.

When she left for Britain at 30, escaping the scene of an unhappy childhood and two failed marriages, she had in her suitcase the manuscript of a novel that broke new ground with its depiction of an inter-racial relationship in her white-ruled homeland. “The Grass Is Singing” was an immediate bestseller in Britain, Europe and America.

Her early stories and novellas set in Africa, published during the 1950s and early 1960s, decried the dispossession of black Africans by white colonials and exposed the sterility of white culture in southern Africa – work that made her a “prohibited alien” in Southern Rhodesia and South Africa.

Lessing wrote that, for her, Africa was “not a place to visit unless one chooses to be an exile ever afterwards from an inexplicable majestic silence lying just over the border of memory or of thought”.

But it was her 1962 novel “The Golden Notebook” that brought her international fame with its experimental style and format, and linked her firmly to the feminist cause.

Its female heroine, Anna Wulf, is a writer exploring her own artistic and personal disintegration as she tries to make sense of a life compartmentalised into various roles.

The Swedish Academy said in its Nobel citation that it “belongs to the handful of books that informed the 20th-century view of the male-female relationship”.

But while the growing feminist movement claimed it as a defining statement, Lessing saw her work as much more complex, and resisted being co-opted into the “sisterhood”.

In some 55 novels and collections of short stories and essays, she turned her inquiring gaze on the interplay between not only men and women but also the individual and society, sanity and madness, and idealism and reality.

Her 1971 work “Briefing For A Descent Into Hell” records the psychiatric treatment of a hallucinating college professor.

A restless curiosity and hunger for reinvention even pushed her into science fiction, heavy like much of her work with a sense of doom that she said stemmed from her father’s experience of World War One.

The five novels of “Canopus in Argos”, published between 1979 and 1983, provide a “space eye” view of human life by describing a colonised planet Earth used as a social laboratory by galactic empires.

Lessing’s disregard for others’ opinions meant that she was not afraid of controversy, angering Americans by saying that the 9/11 attack was “neither as terrible nor so extraordinary” as people thought.

She was also not afraid to change her views, renouncing her youthful espousal of communism, but not the passion and humanity that drove it.

In 1987’s “The Wind Blows Away Our Words”, Lessing attacked what she saw as the West’s indifference to the war in Afghanistan after making a trip to Afghan refugee camps in Pakistan.

The next year, critics variously read “The Fifth Child”, the story of the havoc that an antisocial child brings to a family, as an allegory of the Palestinian problem, the collapse of the British empire, feminism, genetic experiments, treatment of children in institutions, urban decay, impending apocalypse or even the situation of migrant labourers in Europe.

Lessing, ever the contrarian, said none of those issues had even crossed her mind, and that she had merely been retelling a classic horror story.

Nevertheless, the theme of alternative reality runs through much of her work, evoking her own flight from a childhood coloured by a strained relationship with her parents.

Leaving school at 13 to spite her mother, she educated herself by immersing herself in Dickens, D.H. Lawrence, Dostoyevsky and Tolstoy, when she was not running off into the bush. Two short-lived marriages followed, and three children, then exile.

Her last novel, “Alfred and Emily”, published in 2008, is half a biography of her parents and half a fictional account of the lives they might have led, if it had not been for the cataclysmic war where her father was maimed in the trenches.

In “Walking in the Shade”, the second volume of her autobiography, she wrote that by the age of 14 she could “set a hen, look after chickens and rabbits, work dogs and cats, pan for gold, take samples from reefs, sew, use the milk separator and churn butter, make cream cheese and ginger beer, … drive the car, shoot pigeons and guineafowl for the pot, preserve eggs – and a lot else.

“Doing these things I was truly happy,” she wrote. “Few things in my life have given me greater pleasure.”